Hurts runs for 2 TDs, Eagles come back to top Panthers 21-18 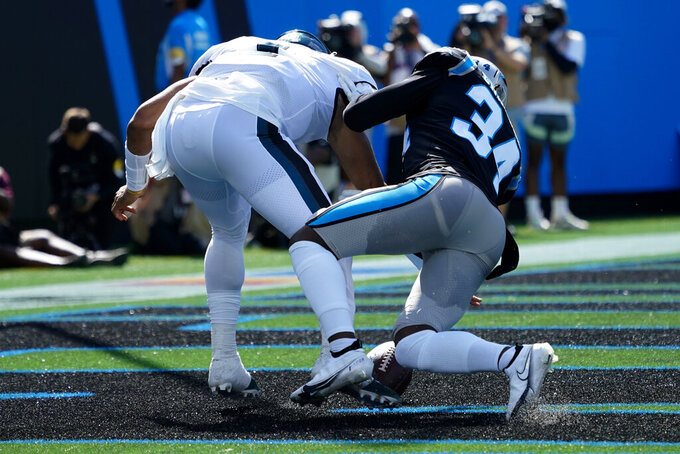 Philadelphia Eagles quarterback Jalen Hurts chases a fumble into the end zone as Carolina Panthers defensive back Sean Chandler recovers for a safety during the first half of an NFL football game Sunday, Oct. 10, 2021, in Charlotte, N.C. (AP Photo/Jacob Kupferman)

CHARLOTTE, N.C. (AP) — Jalen Hurts was quiet in the run game for the better part of three quarters, often handing off on zone-read options instead of keeping the ball.

That all changed with the game on the line.

Hurts took matters into his own hands, running for two second-half touchdowns on Sunday and the Philadelphia Eagles battled back from a 12-point deficit to defeat the Carolina Panthers 21-18 and snap a three-game losing streak.

“We were just executing at its purest form," Hurts said. “It was the zone read making it happen.”

Carolina's defense controlled the tempo for most of the game and kept Hurts in check, but the momentum began to slip away late in the third quarter when he connected on a 53-yard pass to Quez Watkins to set up a 1-yard TD run.

After T.J. Edwards blocked a Carolina punt, Hurts took advantage with a 6-yard TD run after faking a handoff to give the Eagles their first lead of the game with 2:38 remaining. He capped the score by imitating Cam Newton's Superman celebration, pretending to rip open his jersey.

Hurts finished with 198 yards on 22 of 37 passing and ran for 30 yards on nine carries, while DeVonta Smith had seven catches for 77 yards and a 2-point conversion for the Eagles (2-3).

Hurts said the Eagles didn't play up to their standards, but ”it was enough."

For the Panthers (3-2), it was a painful loss in a game they felt they should have won.

“It sucks, it hurts and I probably won't sleep tonight," said Panthers cornerback Donte Jackson of surrendering the double-digit lead.

Sam Darnold had his worst game since joining the Panthers, as he was intercepted three times including twice by Darius Slay. Darnold was sacked three times as Carolina managed just 267 yards against an Eagles defense that allowed 83 points and 851 yards in its previous two games.

It was yet another game in which the Panthers have struggled to find their rhythm on offense in the third quarter.

“We have to come out of the locker room firing,” Darnold said. “We have to execute. We can’t hurt ourselves with penalties and turnovers.”

Darnold finished 21 of 37 for 177 yards with one touchdown and three interceptions.

“There were guys that were open and we’ve got to make those throws,” Panthers coach Matt Rhule said of Darnold's performance.

Darnold’s effort to bring Carolina (3-2) back in the final 2 1/2 minutes ended when he was picked off by Steven Nelson along the left sideline as he threw under pressure. The Eagles, who were held to 88 yards in the first half, ran out the clock to hand Carolina its first loss at home.

Carolina certainly had its chances to put the Eagles away early.

Darnold slightly underthrew Robby Anderson on a deep ball that was batted away by Avonte Maddox at the last second. He also overthrew Anderson on a third down pass that would have moved the chains. He threw two bad interceptions, one that was returned to the Carolina 10. And, the Panthers missed a golden opportunity for an easy touchdown when center Jason Kelce snapped the ball over Hurts' head into the end zone, prompting a scramble for the ball. Carolina had four chances to corral the ball before it rolled out of the back of the end zone for a safety.

“We should have scored more points in the first half,” Rhule said.

The Panthers are 3-0 with Christian McCaffrey and 0-2 without him.

But it was difficult to pin the loss on the absence of the 2019 All-Pro as rookie Chuba Hubbard filled in well, rushing for 101 yards on 24 carries — the first 100-yard rushing game of his NFL career. But Hubbard was in no mood to celebrate, saying “We have to find ways to put games away."

Darnold isn't getting much help from his offense. In the back-to-back losses to NFC East foes Dallas and Philadelphia, he has been hit 19 times and sacked eight times.

“I need to get the ball out faster,” Darnold said.

Neither team reported any injuries.