Injuries to stars leave Steelers with no margin for error 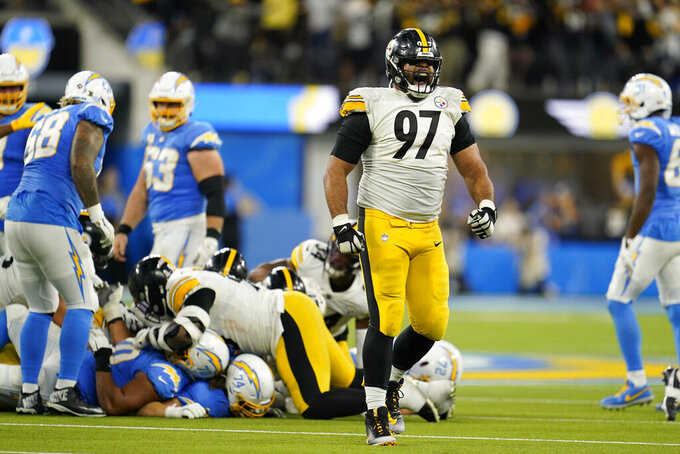 PITTSBURGH (AP) — The Pittsburgh Steelers spent all week hoping Ben Roethlisberger's bout with COVID-19 would be mild enough to allow him to start on Sunday night in Los Angeles.

All that attention, all that concern, might have been a little misplaced. As vital as their veteran quarterback is, the Steelers have become just as reliant on star outside linebacker T.J. Watt and perennial Pro Bowl safety Minkah Fitzpatrick.

While Roethlisberger felt well enough to take a private plane cross-country to suit up against the Chargers, Watt and Fitzpatrick remained back home, forced to watch a wild 41-37 loss on TV as Pittsburgh had its five-game unbeaten streak come to a screeching halt.

Without Watt wreaking havoc coming off the edge and Fitzpatrick keeping watch over the secondary, Los Angeles lit the Steelers (5-4-1) up for 533 yards, the last 53 coming on Justin Herbert's dart to a wide-open Mike Williams down the left sideline with 2:09 to play that provided the clinching touchdown.

“We couldn’t apply pressure with our four-man rush or keep them in the pocket,” coach Mike Tomlin said. “We weren’t good enough in coverage with less than seven. We have to get back to the drawing board and do a better job of putting them in positions to be successful with the people that we have at our disposal.”

That'd be wise because while Fitzpatrick will have a chance to come off the COVID-19 list this week, Watt's ailing hip and knee make his status for next Sunday's trip to Cincinnati (6-4) far more uncertain.

Tomlin, as is his nature, refused to blame injuries for the shaky play by a defense that's been iffy at times this season even when close to fully healthy.

Norwood is a rookie seventh-round pick who managed to stick after a stellar training camp. The other five have spent time on various practice squads during their brief and at this point still nondescript careers.

If the Steelers want to have any shot at contending while facing the league's most difficult schedule over the season's final seven weeks, Watt likely needs to heal quickly and veteran defensive tackle Cam Heyward needs some help.

Perhaps the most jarring image from a largely miserable defensive performance came in the fourth quarter when the 32-year-old, 295-pound Heyward chased down the 23-year-old, 237-pound Herbert at the end of a 36-yard gain.

Heyward's effort — as it's been for the entirety of his 11th season — was remarkable, though he did apologize for a post-play punch to Herbert's midsection he stressed was unintentional. The fact Heyward was the only player in gold-colored pants within 5 yards of Herbert was an indictment of the play of those around him.

“Cam is Cam,” Tomlin said. "He gives everything he has, that’s why we love him and respect him. That’s why we elected him as a captain and that’s why he represents us in that way.”

Yet Heyward can't do it alone. He needs help, and help quickly, if Pittsburgh is going to stay afloat.

The 39-year-old, who participated in meetings virtually all week while in the COVID-19 protocol, threw for 273 yards and three touchdowns and guided a frantic fourth-quarter rally in which the Steelers erupted for 27 points, more than they've scored in all but two games this season.

Offensive coordinator Matt Canada's red zone play-calling. For a second straight week, a botched goal-to-go sequence proved costly. The Steelers came away with no points on a second-quarter drive after failing to get into the end zone on four snaps inside the Los Angeles 10, a sequence in which rookie running back Najee Harris — who is off to the best start by a first-year back in franchise history — touched the ball just once.

Miles Killebrew. Tomlin has a special affinity for special teams' aces. Killebrew has become just that since signing a one-year deal in March. The 28-year-old has a pair of blocked punts on the season, one that fueled a surge past Buffalo in Week 1 and another on Sunday night that did the same.

Devin Bush. Thirteen months removed from a torn ACL, Bush is still searching for any semblance of the form or consistency he showed before going down against Cleveland last October. Pittsburgh gambled by trading up to grab him with the 10th overall pick in the 2019 draft and he has come nowhere close to living up to that standard so far in 2021.

The injury list behind Watt and defensive back Joe Haden (foot) is long. Tight end Eric Ebron and backup guard J.C. Hassenauer — who started in place of an already injured Kevin Dotson — joined it against the Chargers.

0-4 — Pittsburgh's record during Watt's five-year career when he is out of the lineup.

Hope the defense gets healthy in time to face the Bengals, who will be searching for their first season sweep of the Steelers since 2009. Cincinnati drilled Pittsburgh 24-10 at Heinz Field on Sept. 26.