Jackson off to running start while making history for Ravens 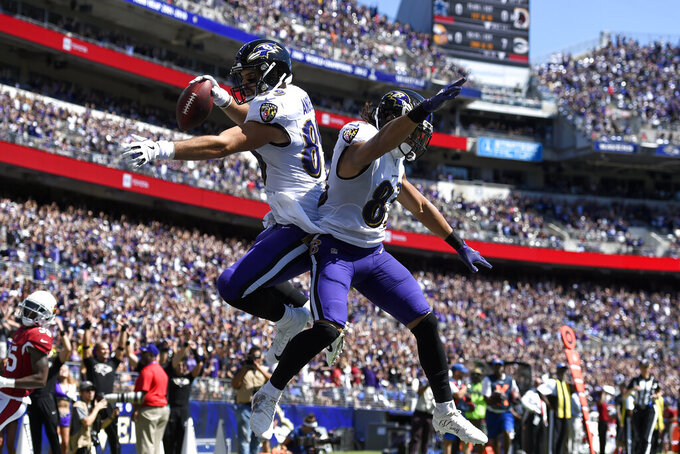 OWINGS MILLS, Md. (AP) — In the wake of a history-making performance, Lamar Jackson was satisfied only in that he helped the Baltimore Ravens win a second straight game.

Deftly throwing the ball downfield and making calculated runs through the Arizona defense on Sunday, Jackson became the first player in NFL history with at least 250 yards passing yards and 120 rushing yards in a single outing.

Afterward, the second-year quarterback lamented being sacked twice and wished he could have made a few throws differently.

"I could have been better," said Jackson, now 8-1 as a starter in the regular season.

It's hard to imagine Jackson, or the Ravens' offense being any sharper over the first two weeks. Jackson threw five touchdown passes in a 59-10 rout of Miami before piercing the Cardinals for 272 yards passing and 120 on the ground in a 23-17 victory.

There is a profound difference between Jackson as a rookie — when he had one 200-yard passing game — and now.

"He's better at everything," coach John Harbaugh said Monday. "But what I like about Lamar is that he doesn't dwell on the positives too much. He dwells on areas of improvement."

Jackson threw five passes for at least 20 yards, including a perfectly thrown 41-yarder to rookie Marquise Brown on a third-and-11 with 3 minutes left.

"There's no quarterback that's making any better throw than that. Ever," Harbaugh declared.

So what's a defense to do when it can't predict whether a quarterback is going to run or throw?

The Ravens yielded 349 yards passing to rookie Kyler Murray. That does not bode well for a unit that this Sunday will go up against Kansas Chiefs star Patrick Mahomes, who threw for 443 yards and four scores in Week 2 against Oakland.

"There's some plays where we could have (been) in better position, communicated better," safety Tony Jefferson said. "Those are things that you look back on and get fixed."

Harbaugh said: "We can be way better than we were. We're not real pleased the way we played a couple of those zone coverages in there."

Baltimore's defensive front limited Arizona to 20 yards rushing on 11 carries, an average of a paltry 1.8 yards per carry.

"I know they wanted to run the ball more," Harbaugh said. "It's a credit to our defense to make them one-dimensional."

Arizona's longest run was 7 yards, on a scramble by Murray.

Boykin had three passes thrown in his direction and finished with one catch for 11 yards. Snead was targeted once, catching a 5-yarder.

"They've gotten open," Harbaugh said. "The ball will be coming their way, I promise you."

Safety Brynden Trawick hurt his left arm during a punt return Sunday and is questionable for next Sunday.

"It's an elbow/arm issue," Harbaugh said. "It's not going to be a long-term deal, but whether he can go this week or not will be based on how he can deal with it and how he can operate with it."

16 — That's how many times Jackson carried in reaching a career high in yards rushing. The last two of those carries were kneel-downs at the end of the game, but he far exceeded his three attempts (for 6 yards) at Miami.

Then again, Jackson exceeded 16 carries in four of his seven starts last season.

Jackson's only defeat as a starter during the regular season came at Kansas City, when he was outdone by Mahomes in a 27-24 overtime defeat.

Baltimore is the lone unbeaten team in the AFC North and Kansas City (2-0) stands alone atop the AFC West.

At least the Ravens know what it's like to play the Chiefs on the road.