Jags limp into finale with QB Glennon, without RB Robinson 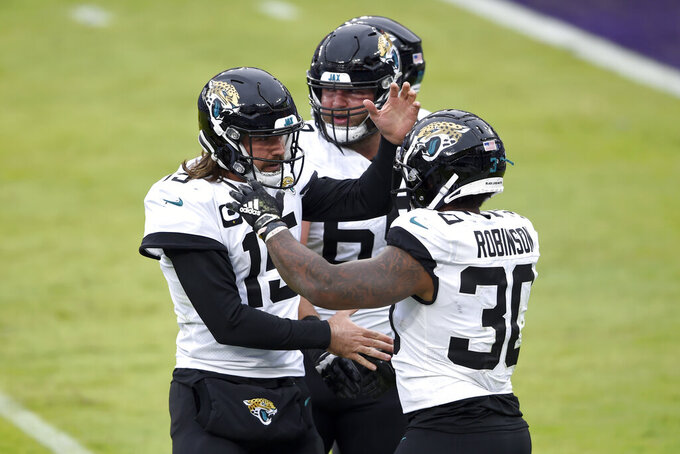 Jacksonville Jaguars quarterback Gardner Minshew II (15) and running back James Robinson (30) react after they connected for a touchdown pass against the Baltimore Ravens during the second half of an NFL football game, Sunday, Dec. 20, 2020, in Baltimore. (AP Photo/Gail Burton)

JACKSONVILLE, Fla. (AP) — The worst (and potentially best) season in Jacksonville's relatively brief history is coming to a close.

Owner Shad Khan fired general manager Dave Caldwell during the skid, parting after the Jags locked up double-digits losses for the seventh time in Caldwell's eight season. Coach Doug Marrone and his staff could be next, possibly within hours of the season finale. Khan and team president Mark Lamping are looking to make wholesale changes to a franchise that owns a league-worst 52-123 record since 2010.

One of the few positives from an another lost season would be landing Clemson star quarterback Trevor Lawrence with the No. 1 pick in the 2021 NFL draft. Jacksonville secured the top choice for the first time in team history, and there's little chance Khan's next general manager will do anything other than select the guy widely considered the best pro prospect since Andrew Luck.

So Jacksonville essentially has one more game of unrest at the all-important QB position.

Marrone said Wednesday that quarterback Mike Glennon will start the finale instead of Gardner Minshew. He also ruled out rookie running back James Robinson (ankle) for the second straight week and said receiver DJ Chark (shin) is iffy to play.

“You never know when these chances are going to come again,” Glennon said. “Enjoy it and try to make the most of my opportunity and try to end the season on a high note. There hasn't been a whole lot (of success) on the field, but it would be a good way to go out."

So the Jaguars will try to avoid a 15-game skid without their No. 1 quarterback, their leading rusher and possibly their best receiver.

Glennon is 0-4 as a starter this season and has two touchdowns and six turnovers in his last 10 quarters. Minshew has better numbers and Jacksonville’s lone win, a 27-20 victory against the Colts in the opener.

“We just feel like it gives us a good chance and we can operate and see where it goes, honestly,” Marrone said. “I don’t think any one decision on the quarterback or any other position is really going to move the needle one way or the other. If it did, then obviously we would make it, but we don’t feel that way.”

Robinson has been the team's best player all season, running for 1,070 yards, catching 49 passes for 344 more and scoring 10 times. He had hoped to play and break the NFL rushing record for an undrafted rookie. Instead, he will finish 34 yards behind Indianapolis' Dominick Rhodes mark (1,104 in 2001).

Without Robinson, Dare Ogunbowale is expected to get his second career start. He ran 14 times for 71 yards last week against Chicago.

Chark leads the Jaguars with 53 receptions for 706 yards and five touchdowns. Jacksonville also will be without rookie receiver Collin Johnson (hamstring) for the second straight week.

Robinson, Chark and Johnson are sure to be around in 2021. Marrone can't say the same, a topic he addressed with assistants and players this week.

“When you’re not doing well, you don’t ever want it to end,” Marrone said. "You want to try to keep getting opportunities and try to keep winning. That's the competitiveness that you want. You don’t want to say, ‘God, I can’t wait for this to be over and then we’ll see what happens’ and then kind of reboot, reboot, reboot.