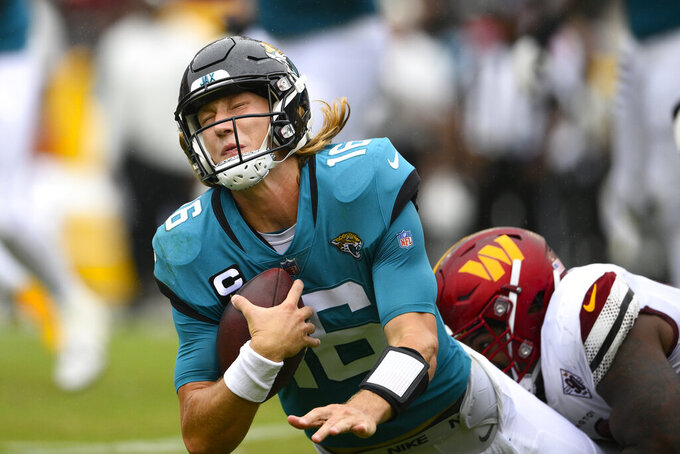 JACKSONVILLE, Fla. (AP) — Trevor Lawrence was supposed to be better than this by now.

He was, after all, widely considered a generational quarterback when the Jacksonville Jaguars selected him with the No. 1 pick in the 2021 NFL draft.

But the second-year pro looked a lot like he did as a rookie in a 28-22 loss at Washington to open the season Sunday. Errant throws. Head-scratching decisions. And not enough help around him to make a difference.

“I don’t have all the answers right now,” Lawrence said. “We shot ourselves in the foot a lot. There’s a lot of things that we control that we didn’t do a great job of controlling. We have to play smarter all the way around, every position. There is a lot of stuff we have to work on.”

Lawrence completed 24 of 42 passes for 275 yards, with a touchdown and an interception. He inexplicably missed two throws in the red zone, one to Travis Etienne and another to Zay Jones, and watched helplessly as Etienne dropped a sure TD pass on a fourth-down play.

The former Clemson star also was sacked twice, flagged twice for intentional grounding and threw a third-down pass up for grabs late in a one-score game.

The expectation is Lawrence will grow from his mistakes. He did at times last season. But the Jaguars need him to take a huge leap, the kind of positional jump that could make one of the league’s worst franchises an annual contender in the AFC South.

Jacksonville allowed 85 yards rushing and 3.0 yards a carry, a solid outing considering it was facing a guy who totaled 1,832 yards and 18 touchdowns in his first two NFL seasons. Antonio Gibson finished with 58 yards on 14 carries against the Jaguars.

It was progress for a team that invested significantly on the defensive side of the ball, signing defensive tackle Foley Fatukasi and linebacker Foye Oluokun in free agency and drafting linebackers Travon Walker (first overall), Devin Lloyd (27th) and Chad Muma (70th) in the first three rounds.

A tougher test comes next week against Indianapolis’ Jonathan Taylor, who ran for 1,811 yards and 18 TDs last season.

The Jaguars have to play cleaner to improve their chances. They were penalized 13 times for 90 yards, including a neutral-zone infraction on third down that sealed the victory for the Commanders. They were 3 of 12 on third-down conversions and 0 for 1 on fourth down. The defense blew coverages on both of Carson Wentz’s fourth-quarter TD passes. And Riley Patterson clanged a 37-yard field goal off the left upright.

All those miscues added up, contributing to the franchise’s 11th loss in its past 16 openers.

“We beat ourselves,” coach Doug Pederson said. “Just some costly mistakes at the wrong time. Games come down to three to five plays every week. We got to finish better, and we got to take care of those little things.”

James Robinson ran 11 times for 66 yards and a touchdown in his first game since tearing his left Achilles tendon last December. The third-year pro also had a 3-yard TD reception. It had to feel good for Robinson to prove he’s fully back after sitting out most of training camp and the entire preseason.

Left guard Ben Bartch was beaten early and often, a clear weak spot in an offensive line that otherwise held its own against Washington’s formidable front. A fourth-round draft pick in 2020 from tiny Saint John’s University in Minnesota, Bartch beat out veteran Tyler Shatley in the preseason. But no one would be surprised to see Shatley or relative newcomer Cole Van Lanen replace Bartch in the starting lineup soon, maybe even against the Colts.

7 — number of consecutive wins against Indianapolis at TIAA Bank Field. The Jaguars haven’t lost to the Colts at home since Nov. 11, 2014. It’s the longest winning streak by either team in a series that began when they formed the AFC South in 2002.

The Jaguars have a chance to get a rare win in September. They are 13-33 in the first month of the season since 2009.