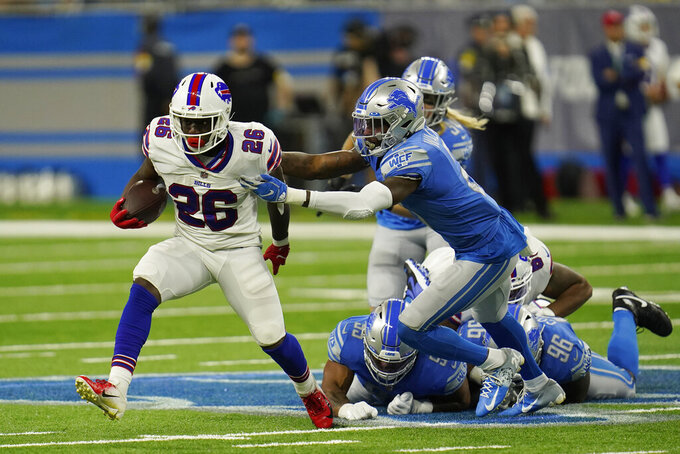 Buffalo Bills running back Devin Singletary (26) is stopped by Detroit Lions defensive back Tracy Walker (21) during the first half of a preseason NFL football game, Friday, Aug. 13, 2021, in Detroit. (AP Photo/Paul Sancya)

DETROIT (AP) — Josh Allen rested and and Mitchell Trubisky barely played in the Buffalo Bills' preseason opener, giving Davis Webb and Jake Fromm extended opportunities to show what they could do.

Fromm, Buffalo’s fifth-round pick in 2020, spent all of last year as the team's COVID-19 emergency quarterback. He was forced into self-isolation and had to work out mostly on his own all season.

“Last year, it was was hard to make those game-like scenarios," he acknowledged. “That’s why it feels awesome for me."

Davis Webb threw a 6-yard, tiebreaking touchdown pass to Devin Singletary late in the second quarter. Webb is vying with Fromm to be Buffalo's third-string quarterback.

The Bills, coming off their first AFC East title since 1995 and longest playoff run in 27 years, clearly want to keep key players healthy for Week 1 in just under a month.

“We only have three of these (preseason) games to evaluate players we don’t know as much about," Buffalo coach Sean McDermott said.

“Watching him get out and be able to make plays on the run," Webb said.

Fromm entered in the fourth quarter and finished 8 of 13 for 65 yards, playing for the first time since the 2019 season at Georgia.

“The thing with Jake is, he has been there before," McDermott said. “He’s been in big games before, those moments."

Jared Goff got off to a rough start in his and coach Dan Campbell's debut with the Lions, nearly throwing an interception on his first snap and getting sacked to end the game-opening drive with a thud.

The former Los Angeles Rams quarterback, acquired as part of the Matthew Stafford trade, bounced back with seven straight completions. Goff finished 7 of 9 for 56 yards and had a 4-yard run to set up Randy Bullock's 28-yard field goal that ended an 18-play, 70-yard drive that took almost 10 minutes off the clock.

“As good as that is, if you're going to possess it that long, you need to come away with a touchdown," Campbell said. “But it was encouraging to see those big boys up front just go to work and Goff manage the football and march us down the field."

Craig Reynolds — a day after signing — had a 24-yard touchdown run midway through the fourth quarter to cut Detroit's deficit to 13-12.

“I don't know if I met him yet," Goff said. “I know that sounds horrible, but he got here last night.”

After Reynolds leaped into the end zone to score, David Blough's 2-point conversion pass was incomplete.

Blough, competing with Tim Boyle to be Goff's backup, opened the next drive with a 35-yard pass to rookie Javon McKinley and converted a third-and-4 with a 15-yard pass to Tom Kennedy. The passes set up Bullock's 28-yard, go-ahead field goal with 1:38 left, which proved to be too much time on the clock to hold on for the win.

Buffalo defensive end Greg Rousseau, the No. 30 pick overall this year, beat Detroit offensive tackle Penei Sewell, who was drafted No. 7 overall, for a sack on the opening possession.

“That wasn't all him," Campbell said. “For him to come out and not get beat, I would be shocked. We can't forget he's still a rookie. This was great for him."

Bills RB Antonio Williams (stinger), WR Isaiah Hodgins (knee) and Lions C Evan Boehm (right knee) were injured during the game. Williams was able to return and the Bills didn't not have an update on Hodgins' condition after the game.

Buffalo extended some of Detroit's drives with penalties, finishing with nine flags for 112 yards. The Lions were penalized five times for 59 yards.