Jalen Hurts, Eagles too much for Lions in opener 38-35 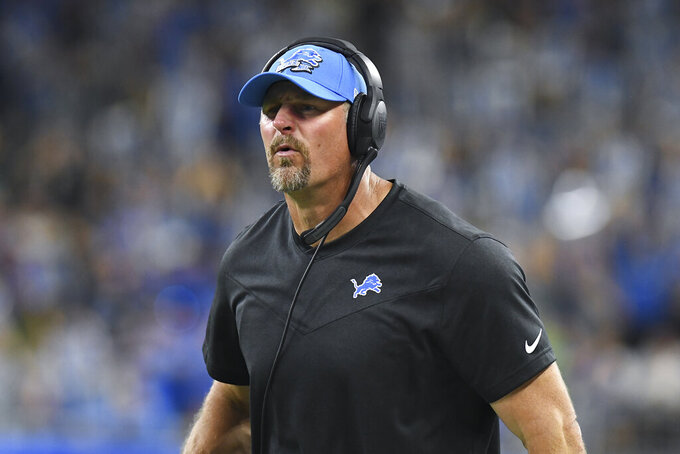 DETROIT (AP) — Jalen Hurts made plays with his legs, right arm and head.

Hurts accounted for 333 yards and a touchdown and A.J. Brown had a career-high-tying 155 yards receiving in his Philadelphia debut, helping the Eagles hold on for a 38-35 win over the Detroit Lions on Sunday.

Hurts ran 17 times, one short of his career high, for 90 yards and a 1-yard touchdown. The third-year quarterback was 18 of 32 for 243 yards, including a perfectly placed 54-yard pass to Brown that led to Philadelphia taking a 24-14 lead at halftime.

Just as importantly, Hurts threw away many passes to avoid sacks.

“We had a lot broken plays, a lot of throwaways," he said. “As a quarterback, that is the best play sometimes."

The Eagles scored 24 points in the second quarter and had a 17-point lead in the fourth that was cut to three when Jared Goff threw a 22-yard touchdown pass to DJ Chark with 3:51 left.

Miles Sanders' 24-yard run on third-and-2 from the Eagles 27 just before the two-minute warning quieted a raucous crowd.

“That was a big one," Brown said. “We needed that to take the life out of the building."

Philadelphia sealed the win on Hurts' sneak that converted a fourth-and-1 from the Detroit 40 with 50 seconds left.

Sanders finished with 96 yards rushing and was one of three Philadelphia running backs to score.

The Lions started strong, opening the game with a nine-play, 75-yard touchdown drive and forcing Philadelphia to turn it over on downs.

Hurts, though, proved to be too tough to stop on the ground and through the air.

He had 50 yards rushing in the first quarter, the highest total by a Philadelphia quarterback since Michael Vick ran for 2 more yards in the opening quarter of a 2013 game against the New York Giants.

When Hurts threw, Brown was clearly his go-to receiver with 10 receptions on 13 targets. No one else on the team had more than four targets, or three catches.

Brown made a quick return on the team's investment with the most yards receiving by a player in his Philadelphia debut. The Eagles traded the No. 18 pick and a third-round choice to Tennessee for Brown and signed him to a four-year contract worth at least $57 million.

Goff was 21 of 37 for 215 yards with two touchdowns and an interception that James Bradberry returned 27 yards for a score that put the Eagles ahead 21-7 in the second quarter.

“We could have scored 50 out there," said Goff, who made some difficult throws and missed some open receivers. “That’s a really good team, give them credit, but we shot ourselves in the foot all day."

Detroit's D'Andre Swift, who is from Philadelphia, had a career-high 144 yards rushing and a touchdown on 15 carries.

“I’m glad we fought back and I told the guys that we didn’t play well and only lost by three, so that’s a positive," coach Dan Campbell said. “But we can’t accept that and be happy to lose by three. We have a lot to clean up."

Lions defensive back Tracy Walker was ejected for swiping in a scrum with the Eagles after hitting Hurts near his head as he went to the turf late in the third quarter. When Walker hit Hurts above the shoulders after he went down on a run into Detroit territory, Philadelphia players came to their quarterback’s defense. Walker responded by swiping at tight end Dallas Goedert’s helmet and that ended his game.

“I just let my team down, Walker said. “Me, as a team captain, I’ve just got to be better. I was hot-headed at the moment."

Brown wasn't the only player to perform well in his Eagles debut. Bradberry, who signed in May, picked off a pass that was deflected by linebacker Kyzir White, who signed in April.

“It was great to see new Eagles doing that," coach Nick Sirianni said. “That’s why we brought them here."

Detroit receiver Amon-Ra St. Brown caught a 4-yard touchdown pass in the third quarter. At about the same time on Sunday afternoon, his brother, Equanimeous, had a touchdown reception to help Chicago beat San Francisco.

Eagles: DE Derek Barnett limped off the field in the third quarter and was evaluated in a tent behind the sideline.

Lions: DT Levi Onwuzurike (back) went on injured reserve, hurting the depth where the team can't afford to lose players.