Jets' Curry has rare blood disorder, hopes to play in 2022 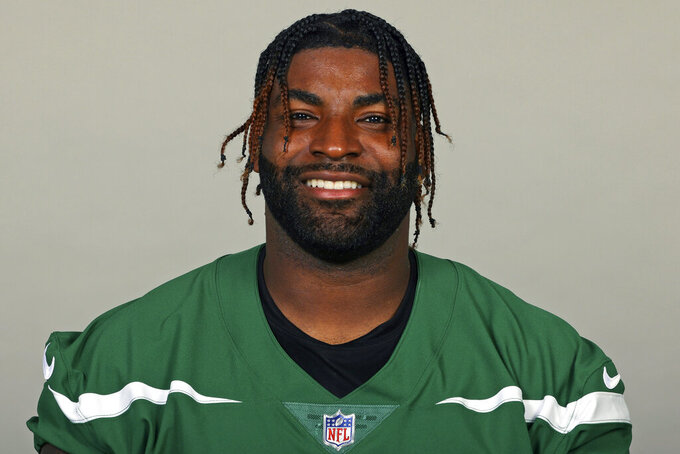 FILE - This is a 2021 file photo of Vinny Curry of the New York Jets NFL football team. Curry announced Wednesday, Aug. 25, 2021, he has a rare blood disorder that required his spleen to be removed. (AP Photo/File)

The 33-year-old Curry wrote in posts on Twitter and Instagram that Jets team doctors discovered the disorder last month, but he didn't specify the condition ailing him. Curry said he was projected to return to the field in mid-September, but he developed blood clots and is taking blood thinners that prevent him from having physical contact for the next three to six months.

“While I am incredibly disappointed that I will not be able to play with my teammates this year, I am thankful that the doctors identified my condition in time,” Curry wrote. “They have informed me that I am expected to make a full recovery and return to the field next season.”

In his Twitter post, which included the words “God Got Me,” Curry thanked everyone who had already reached out to him to wish him well.

“I can promise them all,” he said, “that I will be back stronger and more determined than ever.”

The Neptune, New Jersey, native was a second-round pick of Philadelphia in 2012 out of Marshall and developed into a pass-rushing specialist during his first six years with the Eagles. He played in Tampa Bay during the 2018 season, but returned to Philadelphia the following year.

Curry was on the sideline with the Jets defense Wednesday as New York finished two days of joint practice sessions with Philadelphia. He playfully exchanged trash talk with his former Eagles teammates during some plays. After a would-be sack in practice, Philadelphia defensive tackle Javon Hargrave did a sack dance that he later said was in tribute to Curry.

Curry has 32 1/2 career sacks and 92 quarterback hits in nine NFL seasons. It was that disruptive presence New York was hoping to add to its revamped defensive line that includes Quinnen Williams, Sheldon Rankins, Folorunso Fatukasi and John Franklin-Myers.

“Gone miss you out there bruh, we got you tho,” Franklin-Myers wrote on Twitter.

Robert Saleh's defense has taken a few major injury hits this summer with Curry, defensive end Carl Lawson out for the year with a ruptured Achilles tendon and linebacker Jarrad Davis sidelined two months with an ankle injury.

“We were blessed that we were able to find some things that were going unnoticed,” Saleh said of Curry's situation. “He’s been so productive in his career. His leadership, first and foremost, and just his overall energy and positivity that he brings. It hurts.”

NOTES: Saleh said he is considering playing the Jets' starters — including rookie QB Zach Wilson — on Friday night against the Eagles, but probably not more than a half. He added that playing time is still being discussed. ... LT Mekhi Becton is in the NFL's concussion protocol after injuring his head during practice Tuesday. ... RB La'Mical Perine is dealing with a foot injury. ... Rookie CB Brandin Echols was a full participant after injuring his hip late in practice Tuesday. ... Saleh didn't anticipate either WR Elijah Moore or LG Alijah Vera-Tucker — both rookies coming off injuries — playing Friday night. ... The Jets hired longtime assistant and former NFL quarterback Matt Cavanagh as a senior offensive assistant. He'll fill some of the role that had been expected to be filled by Gregg Knapp, who died on July 22 after being hit by a car while riding his bike five days earlier.