Jets look to be more efficient, productive in passing game 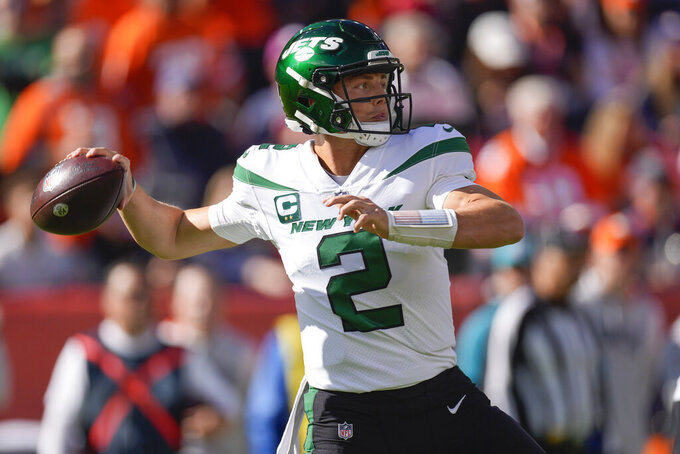 New York Jets quarterback Zach Wilson (2) works in the pocket against the Denver Broncos during the first half of an NFL football game, Sunday, Oct. 23, 2022, in Denver. (AP Photo/David Zalubowski)

It's a grand total of 40 completions, 441 yards and zero touchdowns.

But also no turnovers. And three victories.

“There’s a lot of different ways we can get this thing done,” offensive coordinator Mike LaFleur said. “We’ve done what we felt like we needed to do with the opponents we’ve been going against, particularly going into their environment.”

The air game has mostly been grounded, especially in road wins at Green Bay and Denver — two of the league's toughest defenses — the past two weeks. New York has focused heavily on the running attack, which has helped the Jets to a surprising 5-2 start.

But the question is whether that's sustainable, especially with sensational rookie running back Breece Hall out for the season with a torn ACL.

The Jets acquired James Robinson from Jacksonville on Tuesday to help offset that loss.

“I would say whether Breece is here or not, we need more out of the passing game,” Wilson said. "We’re leaving some plays out there on the field. We just need to be able to execute and go out there and do our offense. I feel like we’re in a good spot, and everyone is feeling confident. We’re winning games.

“In the pass game, we would like to be more efficient regardless of if Breece was here or not.”

Since leading the Jets to a 24-20 fourth-quarter comeback win at Pittsburgh in his season debut in Week 4, Wilson has looked more like a game manager than a game changer — and it has worked well for the Jets so far.

LaFleur wasn't about to spill any of the details on what that might be, especially with New York looking to end a 12-game skid against New England on Sunday.

But Bill Belichick's Patriots boast one of the league's better defensive units — so it might not be a shocker if the Jets look to continue what has made them successful during their four-game winning streak.

“I’m looking forward to facing these top defenses for that exact reason: How good can we be?” Wilson said. "We haven’t shown that yet in the pass game. We’re almost more optimistic looking up to this game because of that. It’s another challenge for us as an offense, as a passing unit to be able to go out there and execute.

“I think we have the ability to do that, so I’m excited.”

Elijah Moore's return after being held out a game is an interesting subplot. The second-year wide receiver had no official targets two weeks ago at Green Bay and expressed his frustration on social media after the game. A few days later, he demanded a trade because of the lack of pass-catching opportunities this season — and was kept home by the Jets when they went to Denver.

Moore is back, and coach Robert Saleh said he'll play against New England. But will the receiver's frustration linger if the Jets remain a run-first offense?

“We’re all on the same page with everything,” LaFleur said. “Again, we’re just trying to move forward. We have a tough opponent in New England. I know that’s where his focus is in getting himself prepared for Sunday, and that’s where my focus is for this offense.”

And whether that's running their way to wins or needing the passing game to step up, LaFleur has confidence Wilson and the offense will accomplish it.

“If you go back to four weeks ago versus Pittsburgh where we were down by 10 in the fourth quarter, him and the rest of the guys did what they had to do to find a way to get a W,” LaFleur said. "So like I keep preaching to the guys, we can play any game — we can play any game necessary.

“We’ve proven that over four games. We want to get more consistent, but they can play any game.”