Jets WR Quincy Enunwa out for season with neck injury 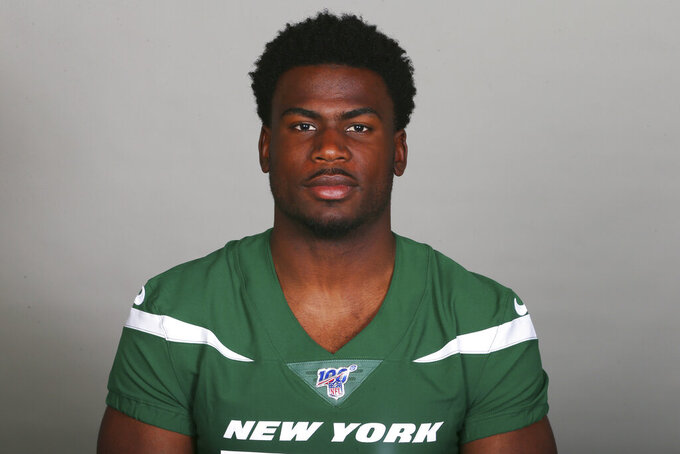 This is a 2019 file photo showing Quincy Enunwa of the New York Jets NFL football team. Jets wide receiver Quincy Enunwa will be sidelined the rest of the season with a neck injury, his second in just over two years. Coach Adam Gase says Wednesday, Sept. 11, 2019, that Enunwa is still undergoing tests to determine the severity. He also wouldn’t speculate as to whether the injury could threaten Enunwa’s career. (AP Photo/File)

FLORHAM PARK, N.J. (AP) — Quincy Enunwa's season is over after his second neck injury in just over two years.

The New York Jets wide receiver was hurt Sunday in the season-opening loss to Buffalo and told the team's medical staff Monday that he wasn't feeling right physically and had several tests.

Enunwa was placed on injured reserve, and the Jets claimed former Bengals defensive lineman Jordan Willis to take his place on the roster. Willis was a third-round pick by Cincinnati in 2017 out of Kansas State and had 45 tackles and two sacks in two seasons.

The 27-year-old Enunwa missed the entire 2017 season after injuring his neck in training camp. He had bulging disks in his neck that required surgery, but it wasn't immediately certain if the two injuries are related.

Coach Adam Gase also wouldn't speculate if the latest injury could threaten Enunwa's career, saying "there's a lot steps left here" before that will be determined.

"I just know for this season, I know for sure," Gase said Wednesday. "I think he's going through a lot of different tests and he's got to talk to doctors. I don't want to say that because I don't know."

Enunwa returned last season from the first neck injury and had 38 catches for 449 yards and a touchdown, and the team rewarded him with a four-year, $36 million contract extension.

Gase spoke in the summer about how he liked the physical style of the 6-foot-2, 225-pound receiver, and how he complemented the Jets' other weapons on offense. But Enunwa had just one catch in the season opener for minus-4 yards, and briefly left early in the game before returning.

A sixth-round draft pick out of Nebraska in 2014, Enunwa has 118 receptions for 1,621 yards and five touchdowns.

"You lose a starter, you lose a guy that's a veteran player that's been through a lot, that's done a lot of good things," Gase said. "I mean, he's done everything you could possibly ask a guy to do. He tries to do everything right. He works hard, he studies, he tries to lead by example. You know, he speaks up when he has to. I mean, the way he plays, everything is violent and gives everything he has.

"I feel for him just from the aspect that he's going through something like this."

New York traded a 2021 sixth-round draft pick to New England for Demaryius Thomas on Tuesday, a rare deal between the AFC East rivals that now makes even more sense. The 31-year-old Thomas could see a major role in the offense opposite Robby Anderson and Jamison Crowder, and Gase expects him to play Monday night against Cleveland.

The team announced just before practice that the deal was official after Thomas passed his physical.

Thomas spent most of the summer on New England's physically unable to perform list while continuing to recover from an Achilles tendon injury that ended his season with Houston last December. He was activated by the Patriots on Aug. 20 and had seven catches for 87 yards and two touchdowns in the preseason finale against the Giants. He was among the Patriots' cuts after camp, but was re-signed and then inactive for New England's first regular-season game of the season Sunday night against Pittsburgh.

"We just kind of looked at it as, they added another guy and they kind of had some depth, so, we took a shot," Gase said. "It's a guy that we knew."

Thomas and Gase were together in Denver from 2010-14, when Gase was the wide receivers coach and later the Broncos' offensive coordinator. Thomas was also part of the Broncos' Super Bowl-winning team with Peyton Manning in February 2016. He has 688 receptions for 9,330 yards and 62 touchdowns.

"He knows the offense and he can easily be plugged in," Gase said. "He still remembers everything."

Thomas didn't practice Wednesday, but was on the sideline watching his new teammates in a black long-sleeved Jets T-shirt and green shorts.

NOTES: QB Sam Darnold was sent home before practice with what Gase said was "strep throat or something." The coach wasn't concerned about Darnold's availability for the game against the Browns. "He'll be all right," Gase said. ... S Jamal Adams was held out of practice because of lingering hip and back soreness from the opener. "We should be in good shape after we get further away from the last game," Gase said. ... LB C.J. Mosley (groin) and rookie DT Quinnen Williams (ankle) were both missing practice, but Gase was optimistic that both could be ready to play Monday night. ... A smiling Gase on the signing of Sam Ficken, the Jets' fourth kicker since July: "We got a new one. Why not? Let's go baby!" Kaare Vedvik was waived Tuesday after missing an extra point and 45-yard field goal attempt against Buffalo. The Jets opened training camp with Chandler Catanzaro, who retired after struggling in the preseason opener, and then Taylor Bertolet, who was shaky in three games.