John Harbaugh confident Ravens will bounce back next season 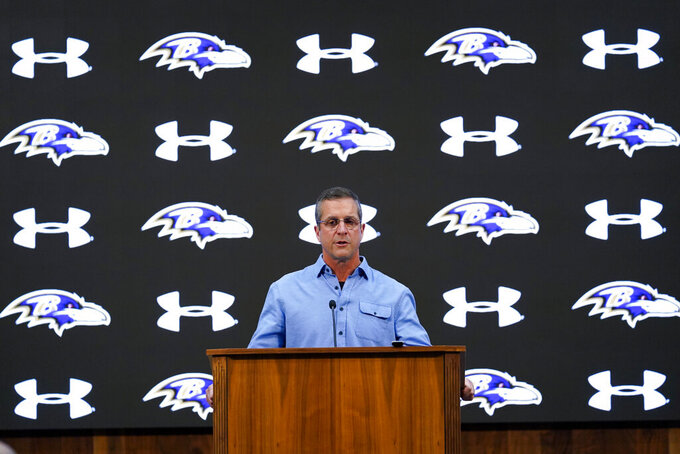 “I’m pretty fired up, excited, ready to go,” Harbaugh said Monday during his first news conference since the season ended. “You think every single day about what we’re doing and where we’re going and what’s the next step.”

Baltimore finished 8-9, just the second losing season under Harbaugh. Despite injuries and other challenges, the Ravens were in the playoff hunt until the final week of the regular season.

Harbaugh has already laid some groundwork for next season, bringing back defensive coordinator Mike Macdonald, who held the same position at the University of Michigan. Macdonald is replacing Don Martindale.

Macdonald had left the Ravens to take the job with the Wolverines before last season, moving from Harbaugh’s staff to work under his brother Jim Harbaugh. Macdonald was a key addition to a group of assistants that helped Michigan finally beat Ohio State and win the Big Ten conference.

John Harbaugh will also have to hire at least one additional coach.

Ravens tight ends coach Bobby Engram was hired to be the offensive coordinator at Wisconsin. Other Harbaugh assistants could also be leaving Baltimore.

“It’s my responsibility to put the coaching staff together,” Harbaugh said. “I made it my business to try and find out and understand what everybody thinks. We’ve got a great thing going here.”

Baltimore lost both of its top running backs — J.K. Dobbins and Gus Edwards — to season-ending knee injuries during training camp.

Cornerbacks Marcus Peters and Marlon Humphrey, along with starting safety DeShon Elliott, were also lost for the season. As a result, the team had to scramble to find replacements in the secondary that allowed an NFL-worst 278.9 yards passing per game.

The Ravens finished with 19 players on injured reserve.

“You can say it’s bad luck, you can see it’s a fluke, but I don’t think we have the luxury to live there,” Harbaugh said. “We’ve got to turn over every stone. We have to look at every possible avenue to do the best we can to make sure this doesn’t happen again. That’s what we plan on doing.”

One of the keys for next season is getting quarterback Lamar Jackson back on track.

Jackson missed the final four games with an ankle injury that was eventually diagnosed as a bone bruise. Backup Tyler Huntley struggled to avoid turnovers in the final two games. The Ravens had to turn to Josh Johnson in a 41-21 loss to the Bengals in Week 16 because Huntley was placed on the COVID-19 list.

Harbaugh said Jackson can resume workouts the day after the Super Bowl on Feb. 14.

“Lamar is really determined,” Harbaugh said. “I can’t even emphasize enough how determined he is to improve and get our offense where it needs to be. As a coaching staff, as a scouting staff, we want to do our part. We have to trust in Lamar and all the players to do their part. … Let’s go to work and get better.”