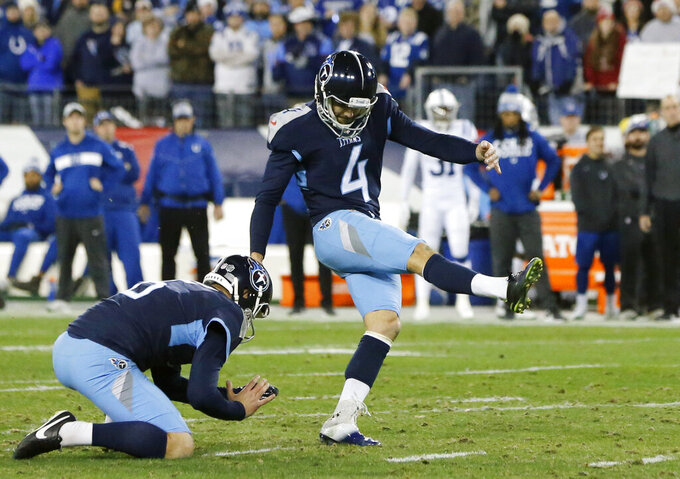 FILE - In this Sunday, Dec. 30, 2018 file photo, Tennessee Titans kicker Ryan Succop (4) kicks a 38-yard field goal against the Indianapolis Colts in the first half of an NFL football game in Nashville, Tenn. The Titans already have missed eight field goals through 10 games, matching their worst seasons of 2001 and 2004. It’s why they rank dead last in the NFL converting just 46.7 percent (7 of 15).(AP Photo/James Kenney, File)

NASHVILLE, Tenn. (AP) — The Tennessee Titans have a very proud tradition of successful kickers over the past couple of decades ranging from Al Del Greco, Joe Nedney, the late Rob Bironas to now Ryan Succop.

That’s what makes this season so very surprising.

The Titans are on their third different kicker and already have missed eight field goals through 10 games to match the team’s most misses since 2004 when they missed eight, a dubious mark they also had in 2001. They currently rank dead last in the NFL, converting just 46.7 percent (7 of 15).

Kickers across the NFL are struggling to put the ball between the uprights this season. The 79.7 percent conversion rate through Week 11 is the league’s lowest number since 2003 when kickers hit 79.2 percent, missing 198 field goals, according to SportRadar.

“It’s probably just one of those years,” Titans special teams coach Craig Aukerman said. “Obviously, we’re not up to what we expect, but I just think it’s one of those years that it’s just been down. I mean it’s hard kicking (field goals) in the NFL. ... Now are they all professional athletes and they should make them? Yes, no doubt. But next year it’ll probably go back up.”

Kickers converted just 77.7 percent of field goals in 1999 — the season the NFL introduced the “K” ball to be used fresh out of the box to keep kickers and punters from softening them up. By 2004, kickers had gotten so used to the “K” ball, the conversion rate started climbing and reached 86.5 percent in 2013.

Even the sweet spot between 40 to 49 yards hasn’t been a guarantee this season with kickers converting only 136 of 196 for a 69.4 percent rate that kickers also matched in 2003.

Sometimes what went wrong is simple. Brandon McManus had a chance to pad Denver’s lead in the fourth quarter Sunday only to send a 43-yarder wide right in a 27-23 loss to Minnesota.

“All I know is I kicked the ground, and it wasn't even close,” McManus said.

Adam Vinatieri, the NFL's career scoring leader and all-time field goal leader at age 46, has struggled with his worst season since 2003. He's missed five field goals and six extra points this season, which had the Colts trying out kickers last week.

Injuries also have been an issue.

Succop made a franchise-record 86.6 percent of kicks through his first five seasons with Tennessee and set an NFL record making 56 consecutive field goals inside 50 yards between 2014 and 2017. Offseason surgery on his right, kicking leg put him on injured reserve to start this season. The Titans tried out Cairo Santos and Cody Parkey, signing Santos with five years’ experience kicking and with Tennessee his fifth team.

He missed a 45-yard field goal wide left in the fourth quarter of a 19-17 loss to Indianapolis in Week 2 and missed three field goals with a fourth blocked in 14-7 loss to Buffalo on Oct. 6. The Titans cut Santos a day later and brought in Parkey, who had been Chicago’s kicker last season until he missed the potential winning field goal off the upright and crossbar in a wild-card loss to Philadelphia at Soldier Field.

Succop returned Nov. 2 and missed his first three field-goal attempts in a 30-20 loss at Carolina a day later.

“Obviously, I have to do a better job, so that’s what I’m doing,” Succop said.

The Jets are on their fourth kicker. Chandler Catanzaro retired abruptly after missing two of three extra points in New York's preseason opener. Taylor Bertolet missed three field goals and two extra points before being cut. Kaare Vedvik was claimed off waivers from Minnesota only to miss a 45-yard field goal and extra point in the Jets' season-opening 17-16 loss to Buffalo.

Sam Ficken, a late cut by Green Bay, is 7 for 11 on field goals for the Jets. He missed from 49 yards in a win Sunday in Washington along with a missed extra point.

The 49ers didn’t expect any problems after placing the franchise tag on Robbie Gould last offseason before signing him in July to a four-year, $19 million contract with $10.5 million guaranteed. Gould had made 72 of 75 field-goal attempts in his first two seasons with San Francisco for the NFL’s best mark in that span. Only Baltimore’s Justin Tucker has been more accurate than Gould in NFL history.

Gould missed kicks in his first two games and three field-goal attempts against Cleveland on Oct. 7. His seven misses in the first six games were the most in that span for San Francisco since 2000 when the 49ers shuffled through four different long snappers.

A quadriceps injury kept Gould out against Seattle, and rookie fill-in Chase McLaughlin yanked a 47-yard attempt way left against the Seahawks in overtime in a 27-24 loss.

"Just rushed it a little bit, hit it a little high and unfortunately missed it," said McLaughlin, who had been 6 of 9 in four games for the Chargers earlier this season.

Buffalo gave a two-year extension to Stephen Hauschka in August, and now the kicker who had the NFL's longest active streak with 17 straight field goals made last season is 11 of 16 this season with the Bills converting only 68.8 percent. He missed from 34 yards in a loss to Cleveland, his first miss inside 39 yards since 2016, and pulled a 53-yarder that would’ve forced overtime wide left.

Hauschka doesn’t have any answers on what’s causing all the misses across the league.

“I have noticed that there's been a lot,” Hauschka said.