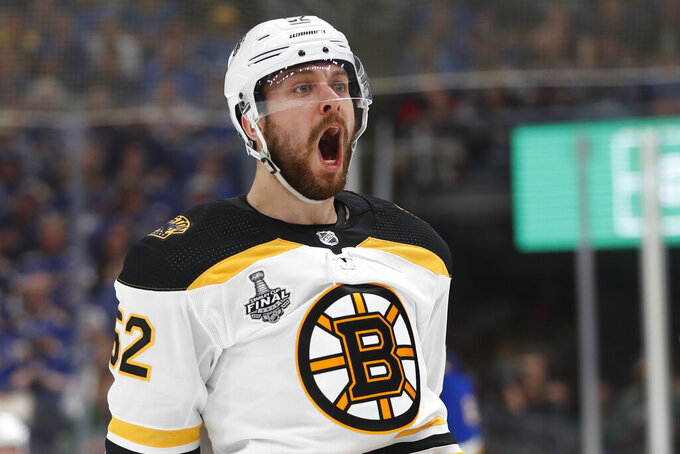 ST. LOUIS (AP) — The Latest on Game 3 of the Stanley Cup Final (all times local):

The Boston Bruins have a 2-1 lead in the best-of-seven Stanley Cup Final after a 7-2 win in St. Louis.

Patrice Bergeron opened the scoring on a power play in the first period and Boston jumped to a 4-0 lead before Ivan Barbashev put the Blues on the board 11:05 into the second period. Torey Krug answered for Boston just 1:07 later and that was it for Blues goaltender Jordan Binnington. He was pulled after giving up five goals on 19 shots.

Colton Parayko added a goal for St. Louis early in the third period, but it was too little, too late as the Bruins clamped down and added two more scores.

St. Louis outshot and outhit the Bruins, but Boston went 4 for 4 on the power play.

There was some star power in the arena for Game 3 of the Stanley Cup Final in St. Louis.

Mahomes chugged a beer when shown on arena video screens while wearing a Blues jersey. Kelce was wearing a Wayne Gretzky Blues jersey from the Great One's short stint in St. Louis

The St. Louis Blues have pulled rookie goaltender Jordan Binnington after falling behind Boston 5-1 in Game 3 of the Stanley Cup Final.

Binnington helped St. Louis climb out of last place in the NHL back in January and has been rock-solid for the Blues in their push to win their first championship. But he was shelled frequently by the Bruins and coach Craig Berube sent in Jake Allen midway through the second period.

Boston opened a 4-0 lead before Ivan Barbashev put the blues on the board 11:05 into the second off a pass from lineup newcomer Zach Sanford. He banked the puck off both of Boston defenseman Charlie McAvoy's skates.

Torey Krug answered for Boston just 1:07 later in the third power play goal in as many chances for Boston. That was it for Binnington, who had never been pulled in his young NHL career. He gave up five goals on 19 shots. Allen had not played since April 3 at Chicago.

The Boston Bruins are running the St. Louis Blues out of their own building in Game 3 of the Stanley Cup Final.

David Pastrnak scored a power-play goal 41 seconds into the second period to put the Bruins up 4-0. It came on the penalty the Blues got for an unsuccessful coach's challenge on Boston's goal with 7.8 seconds left in the first that made it 3-0.

Binnington stopped 21 of 23 shots in the Blues' Game 2 victory.

The Boston Bruins are in command after the first period of Game 3 of the Stanley Cup Final in St. Louis.

Patrice Bergeron, Charlie Coyle and Sean Kuraly scored to give Boston a 3-0 lead after the first 20 minutes. It is the first Cup final game in St. Louis since 1970 and the crowd was raucous from the beginning.

The Bruins withstood an early surge by the home team and ended up scoring three times on four shots against goalie Jordan Binnington. After being outshot 5-0 in the first six minutes, Boston outshot St. Louis 12-3 the rest of the way.

Bergeron scored on a power play and Coyle stayed hot with his eighth goal of the playoffs when he scored on a 2-on-1 with Marcus Johansson with 2:20 left in the first. Kuraly scored his second of the series with 7.8 just seconds left.

Blues coach Craig Berube unsuccessfully challenged that goal for offside and the Blues were forced into another penalty kill.

Patrice Bergeron has given Boston an early 1-0 lead in Game 3 of the Stanley Cup Final against St. Louis.

Bergeron deflected Torey Krug's point shot in 21 seconds into the power play and just over 10 minutes into the first period. Boston's power play is now 3 for 11 in the series.

The first Stanley Cup Final game in St. Louis since 1970 is underway.

Jaden Schwartz stared straight ahead and Brayden Schenn looked around at the crowd during pregame introductions. National anthem singer Charles Glenn, who's battling multiple sclerosis, let the crowd singe a verse of the "Star-Spangled Banner." And young Laila Anderson who's fighting a rare immune disorder, took the microphone and addressed the packed arena.

Then the puck was dropped on Game 3 between the Boston Bruins and Blues. The series is tied 1-1.

St. Louis native and Blues super fan Jon Hamm is fired up about their run to the Stanley Cup Final.

The actor of "Mad Men" fame clapped his way into the room when he talked to reporters before the first Cup Final game in the city in 49 years. He was part comedian, part historian, part St. Louisan but mostly just a fan.

He said: "I really do think —who cares what I think— I'm honestly like an actor that is just a fan of the team. You can pull anybody off the concourse and they'll say the same thing. But I think that people are really in a different way this year believers."

Recalling his experience being in the stadium for the St. Louis Cardinals' 1982 World Series win, Hamm said, "If this happens, it's going to be that times infinity."

Zach Sanford grew up a Boston Bruins fan. Tonight he'll play against them in the Stanley Cup Final.

The native of Salem, Massachusetts, will suit up for the St. Louis Blues in Game 3 in place of suspended forward Oskar Sunqvist. It's his first playoff action since April 14 against Winnipeg.

Sanford says there are "a lot of players that have never got this chance and there's people who never even made it this far."

He adds it's an "awesome" opportunity to try to "help the team get a win."

He's over his Bruins fandom, but that hasn't stopped some buddies back home from texting they're rooting for the Bruins more than him.

Zach Sanford is expected to see his first action in more than six weeks when the St. Louis Blues host the Boston Bruins in Game 3 of the Stanley Cup Final.

Sanford enters the Blues lineup for forward Oskar Sundqvist, who was suspended one game for boarding and concussing Boston defenseman Matt Grzelcyk and potentially knocking him out for the rest of the series. Sanford hasn't played since Game 3 of the first round against Winnipeg on April 14.

Jordan Nolan, who hasn't played an NHL game since January, says he'll skate in warmups but doesn't expect to play. After Robby Fabbri replaced injured forward Robert Thomas in Game 2, the Blues' depth has been tested.