The Latest: Kentucky S Kelvin Joseph opts out, NFL next 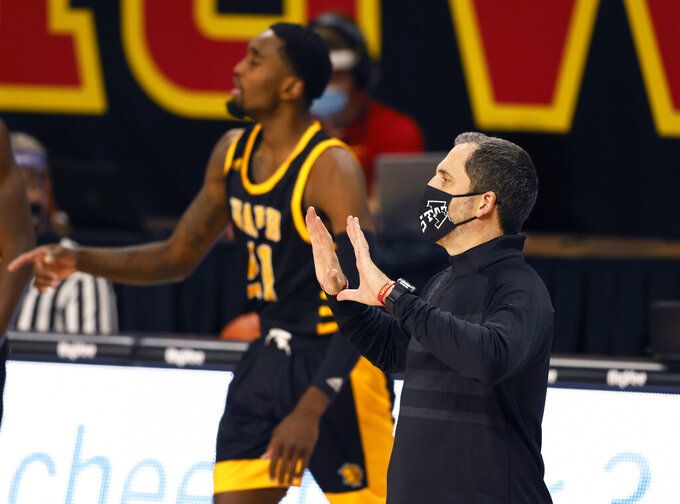 Kentucky starting safety and Southeastern Conference interceptions leader Kelvin Joseph has become the first Wildcat to opt out and will focus on preparing for the NFL draft.

The redshirt sophomore, whose four pickoffs also rank fourth nationally, announced his decision Monday night on social media. Joseph thanked Kentucky coaches, teammates and the community for the opportunity as well as LSU, where he had 12 tackles and a pass breakup in 2018 before transferring and sitting out last season per NCAA transfer rules.

The North Baton Rouge, Louisiana, native added, “I know it was a short stay, but it’s BIG BLUE NATION ALL DAY!”

Joseph also had 25 tackles, a tackle for loss and a pass breakup in nine games. His announcement ironically comes hours after Kentucky coach Mark Stoops noted his team being one of the few to not have players opt out. (

Elon says its men’s basketball team has paused activities due to a positive COVID-19 test within its program.

The program announced the decision Tuesday. It said the case was within its Tier 1 personnel group, which includes athletes, coaches and support staff.

Team members and within that group have begun a quarantine period of at least 14 days. That means scheduled games against Mercer, No. 6 Duke, Howard and No. 14 North Carolina have been postponed.

Elon says it has conducted additional testing after receiving the positive result.

Vanderbilt women’s basketball has canceled its home game Wednesday night against Texas Tech because of COVID-19 issues within the Commodores’ program.

The Commodores announced the cancellation Tuesday, a day after the men’s basketball team withdrew from a pair of games in Connecticut and paused its activities due to a positive test within its program.

The women’s basketball team now has had its first three games of the season canceled. Vanderbilt’s next game is Saturday at Little Rock and remains on the schedule.

The University of Colorado has ordered its men’s basketball program to pause activities for COVID-19 reasons and the Pac-12 has postponed the Buffaloes’ conference opener at Arizona that was set for Wednesday.

The Pac-12 said it would work with both schools to find a mutually agreeable makeup date.

Athletic director Rick George said the status of other upcoming games is dependent on contact tracing and subsequent testing of players and basketball staff this week.

The last time the Buffaloes’ regular season was interrupted was in December 2006 when back-to-back home games were canceled because of a snowstorm.

Oklahoma plans to open its men’s basketball season on Thursday against Texas-San Antonio after a week-long delay.

Oklahoma was scheduled to play the Roadrunners last Wednesday, but the Sooners paused team activities after a spike in COVID-19 cases.

Oklahoma’s game against Central Florida scheduled for last Saturday was postponed, and Oklahoma and Florida mutually agreed to cancel their game scheduled for this Wednesday.

Iowa State will allow about 15,000 fans at Jack Trice Stadium for the Cyclones’ football game against West Virginia on Saturday.

Athletic director Jamie Pollard also announced about 1,400 fans will be allowed at Hilton Coliseum on Sunday for a women’s basketball game against No. 1 South Carolina and a men’s game against DePaul.

Pollard said the decision was made after a discussion with university leaders following reviews of state and local COVID-19 positivity trends and hospitalization rates.

Only families and guests of athletes and staff could attend the Nov. 21 football game against Kansas State and the first three basketball games at Hilton.

Prairie View A&M has canceled men's basketball games against UNC Greensboro and Western Kentucky at the Wade Houston Tipoff Classic in Louisville because of COVID-19-related issues.

The Panthers were scheduled to play UNCG Tuesday night and WKU on Thursday in the multi-team event. UNCG will instead play Winthrop on Tuesday. WKU stated in a release that it is working to arrange a replacement game.

The cancellations reduce the Tipoff Classic schedule from 16 to 14 games. Duquesne and Little Rock are also participating with host Louisville in the event that ends Friday.

A college basketball game between Colorado and Arizona scheduled for Wednesday has been postponed due to COVID-19 issues within the Buffaloes’ program.

The Pac-12 said Colorado does not have the minimum number of scholarship players available due to positive coronavirus tests and contact tracing protocols.

The conference will work with both programs to reschedule the game.