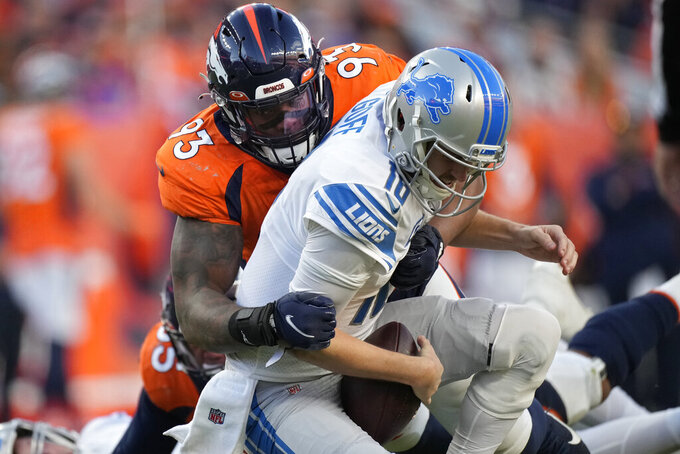 DETROIT (AP) — The Detroit Lions knew they didn’t have much of a chance Sunday against the Denver Broncos.

Not only were they going in with a 1-10-1 record, but their roster had also been decimated by illness. Several players were in the league’s COVID-19 protocol and others were fighting the flu.

Quarterback Jared Goff was healthy, but Detroit’s offense is undermanned at the best of times. Now he was working without his top two running backs, De’Andre Swift (shoulder) and Jamaal Williams (COVID-19) and his favorite receiver, tight end T.J. Hockenson (flu).

Just when it appeared the team had hit rock bottom, though, it got worse. Early in the game, the Lions lost cornerback Jerry Jacobs to a knee injury. Jacobs, an undrafted free agent, has turned into one of the best stories of the season, stepping up when Jeff Okudah went down with an early season Achilles tendon problem.

“You feel awful for the kid,” Lions coach Dan Campbell said. “He has improved so much this year, especially since the spring, and he’s been playing really well lately.

“You never want to see one of your guys get a long-term injury, and the other I hate is that happened now in December. That’s probably a nine-month injury, so it will bleed into next year.”

The news wasn’t all bad, though.

“They said it is repairable, so as much as you hate it for him and for the team, he will be able to work himself back to an even better spot,” Campbell said.

Detroit also lost defensive captain Alex Anzalone to an ankle injury, but Campbell said he is day to day.

At 1-11-1 with four games left and coming off the 38-10 loss to the Broncos, a lot of teams would already be packing for home. It’s hard to imagine checking out early on Campbell, though.

Campbell got fired up – even more than normal – when talking about Sunday’s upcoming home game against the Cardinals.

“People say they have the best team in the NFC, so man, this is going to be a great test for us,” he said. “I don’t care who we have out there, I’ll go to war with the same guys we had yesterday, and I’ll try to coach them up and win a game.”

Not a lot went well on Sunday, but the Lions held Teddy Bridgewater to 123 net passing yards at just 5.1 yards an attempt. That’s their second-best showing of the season, only topped by the 4.8 against the Steelers in Week 9’s 16-16 tie.

When the Lions get behind, Goff’s inability to make plays downfield damages any chance they have at a quick rally. On Sunday, he was 23 for 39 for 215 yards with a touchdown and an interception. In a season when Detroit has been behind on a very regular basis, Goff is averaging fewer than 200 net passing yards a game and has 16 turnovers against 14 touchdowns.

With Swift and Williams sidelined, Craig Reynolds stepped off the practice squad and gained 83 yards on 11 carries. The undrafted free agent is in his third season, but only had one carry as he moved from Washington to Atlanta to Jacksonville before arriving in Detroit this season.

Detroit’s defensive front seven was missing bodies, but the group had to do better than Denver’s 184 yards rushing and three touchdowns on 39 carries.

It is hard to know who will be over their illnesses in time to play the Cardinals, but Swift, Hockenson and Anzalone could help keep things close.

22 — number of Lions who missed the Broncos game for one reason or another.

Get through the rest of the season without major injuries. They will be back on the draft clock before they know it.