Lions use six of eight draft picks for defensive rebuild 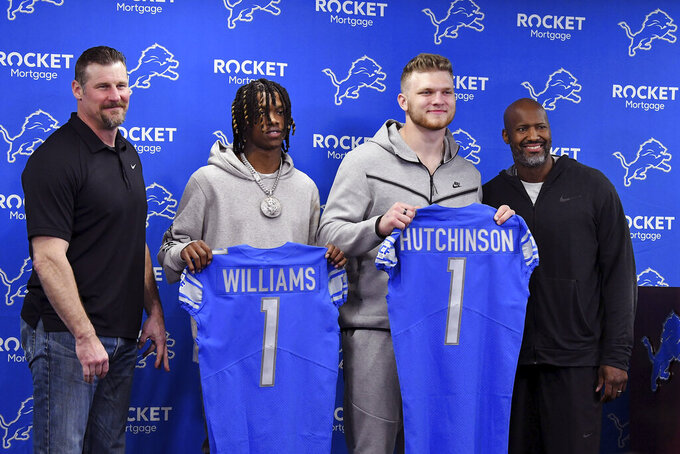 ALLEN PARK, Mich. (AP) — The Detroit Lions continued to make big investments on defense in the NFL draft and are hoping that they result in immediate rewards to a franchise that has struggled in recent seasons.

“We definitely felt like we got better as an organization this week,” said Brad Holmes who completed his second draft as the Lions general manager. “We’ve got eight guys that we’re really, really excited about that can help us going forward.

“The really good thing is about all these guys that we got is they all have different flavors. They’re not all cut out of the same box.”

After finishing among the worst defenses in the NFL for the second consecutive season, the Lions this year used six of their eight picks to rebuild the defense. Over the past two drafts, Detroit has selected 10 defensive players.

“We had a sense that with all the things that we wanted to do it might tilt a little.”

The Lions are hoping Hutchinson, who many had considered to be the top player in the draft, and Paschal, who was selected in the second round, will lead to a relentless pass rush that the team has lacked. The pair will join returning sack leader Charles Harris and Romeo Okwara, who is expected back from a torn ACL during training camp.

Despite signing free agent safety DeShon Elliott during the offseason, Detroit used its third-round selection on Joseph who is expected to compete for a starting position. Joseph tied for an NCAA-best five interceptions in 2021 to go with three fumble recoveries.

The Lions also made a investment on perhaps the team’s biggest need on offense, a big-play receiver, when they made a trade with Minnesota to move up and take Alabama’s Jameson Williams at No. 12.

Detroit, which has focused on upgrading the receiver position this offseason by adding DJ Chark in free agency and re-signing Josh Reynolds and Kalif Raymond, is expecting Williams who is recovering from a torn ACL to be a game changer with his speed and playmaking ability.

With a compensatory pick in the fifth round Saturday, Detroit selected its second offensive player coming off an ACL injury when it picked 6-foot-4, 250-pound Virginia Tech tight end James Mitchell at No. 177. The Lions have been looking for a backup for starter T.J. Hockenson.

The Lions later swapped pick No. 181 with Philadelphia to move back seven spots in the sixth round and add No. 237 in the seventh round. They used No. 188 to select 5-foot-11, 232-pound Oklahoma State linebacker Malcolm Rodriguez who was recognized with All-Big 12 honors in three straight seasons and 5-foot-11, 180-pound cornerback Chase Lucas at No. 237 who played five seasons at Arizona State.

With its second compensatory pick at No. 217, Detroit chose 6-foot-1, 241-pound Jackson State edge rusher James Houston. As a graduate player with the Tigers in 2021, he earned second-team Associated Press FCS All-American and first-team All-SWAC honors by leading the FCS with seven forced fumbles, tying for second with 24.5 tackles for loss and with 16 1/2 sacks.