Losses mount for 49ers on field and with injuries 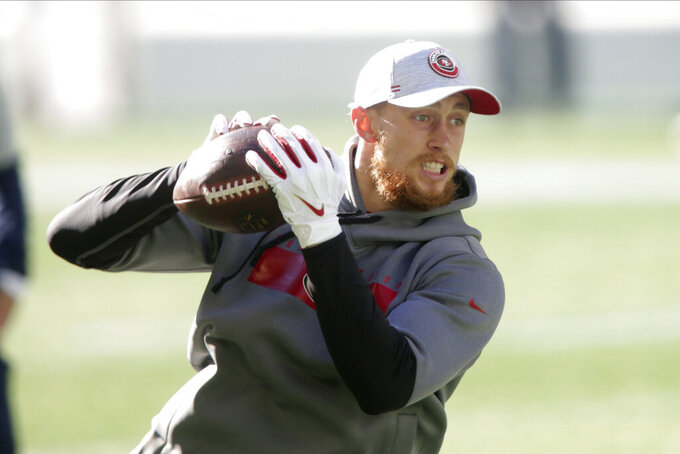 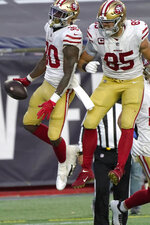 SANTA CLARA, Calif. (AP) — The losses for the San Francisco 49ers kept piling up even after they got home following their latest defeat in Seattle.

A rough day on the field with a 37-27 loss to the Seahawks on Sunday was followed by the news that quarterback Jimmy Garoppolo and All-Pro tight end George Kittle would miss significant time with injuries.

ESPN first reported the severity of the injuries, saying Garoppolo will miss at least six weeks with a high ankle sprain and Kittle will be out eight weeks with a broken bone in his foot.

Those injuries overshadowed all the other things that went wrong in the loss to the Seahawks, from the ill-fated wildcat call by coach Kyle Shanahan that stalled an early drive; an interception in the red zone by Garoppolo; poor protection against the blitz; and a defense that got picked apart by Russell Wilson and the Seahawks.

“We need to flush it and move forward,” offensive lineman Trent Williams said after the game. “Obviously, we’re on a short week, so we won’t even be able to break down this film even if we wanted to.”

The Niners have to start preparing right away for a Thursday night home game against Green Bay up next. They will be extremely short-handed for the game against the Packers as they already are without their top two edge rushers (Nick Bosa and Dee Ford), their best cornerback (Richard Sherman), their No. 1 receiver (Deebo Samuel) and two key running backs (Raheem Mostert and Jeff Wilson Jr.).

That has made it hard for the 49ers to get into a groove, but they know there’s nothing they can do about it.

“Every week is a new week and you have to play with the cards that you’re dealt,” said backup quarterback Nick Mullens, who will make his third start of the season on Thursday. “I can’t speak much on the identity, but it’s all about making plays. You know, ‘who’s going to make the plays?’ and that’s what we have to get back to. Just making plays, executing at a high level and focusing on us.”

Garbage time offense. The Niners finally got moving offensively in the fourth quarter when the Seahawks began playing softer coverage. Mullens relieved Garoppolo and went 18 for 25 for 238 yards and two TDs, tied for the ninth-most yards passing in a fourth quarter in the past 30 seasons. While it had little impact on the game, it did provide a confidence boost for Mullens, who was pulled from a start against Philadelphia in Week 4 after committing two fourth-quarter turnovers.

Pass blocking. The Seahawks came into the game with one of the worst pass rushes in the league but managed three sacks against the Niners. Seattle fooled San Francisco’s line with blitzes and made life difficult with the sacks and eight quarterback hits.

K’Waun Williams. The Niners got their slot cornerback back from injured reserve and he made an immediate impact. He sacked Russell Wilson on a blitz on the second play from scrimmage and also had another tackle for a loss.

Emmanuel Moseley. The cornerback was no match for the physical DK Metcalf on the outside, getting beat twice for touchdowns. Metcalf had 12 catches for 161 yards, with most of the damage coming against Moseley.

RB Tevin Coleman (knee), LB Demetrius Flannigan-Fowles (hamstring) and WR Dante Pettis (shoulder) also left the game with injuries and wouldn’t have been able to practice if the Niners had one Monday. ... S Jaquiski Tartt (groin) and WR Richie James Jr. (ankle) also wouldn’t have been able to practice. ... TE Jordan Reed (knee) could return from IR this week after practicing last week.

2.36 — After rushing for 197 yards and averaging 5.32 yards per carry in a win over New England in Week 7, the running game never got off the ground against Seattle. The Niners were held to 52 yards on 22 carries, with their 2.36 yards per carry the third lowest in four seasons under Shanahan.