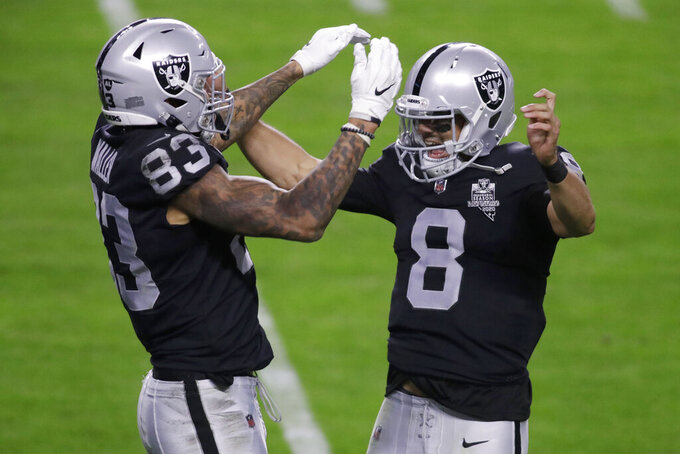 Marcus Mariota provided a bit of magic in a pinch to try to keep the Las Vegas Raiders playoffs hopes alive.

But he couldn’t punch it in on the first possession of overtime and could only watch as a leaky defense gave up another score, sending the Raiders to their fourth loss in five games, 30-27 against the Los Angeles Chargers.

After taking a 6-3 record and legitimate playoff aspirations into a showdown last month with Kansas City, the Raiders (7-7) have once again fallen apart in what has become an all-too-familiar pattern. They blew a late lead to the Chiefs and were dealt lopsided losses to Atlanta and Indianapolis around a last-second win over the winless Jets and now appear headed to miss the playoffs for the 17th time in the past 18 seasons.

“It sucks,” tight end Darren Waller said. “You want to win these stretches to be able to play your best football. The results haven’t been what we want them to be. You have to live with it.”

The Raiders went through the same kind of late-season slump a year ago when they lost five of the final six games following a 6-4 start and are still searching for success in the third season since coach Jon Gruden returned.

Mariota looked like he might provide the spark to salvage the season when he made his debut for the Raiders after starter Derek Carr injured his groin while scrambling on a third-down play near the goal line on the second drive of the game.

Mariota delivered in a big way despite getting almost no practice time all season with his team, showing why Gruden gave him $7.5 million this season to be a back up quarterback.

He led a TD drive on his first possession, capped by a 35-yard strike to Waller. He then engineered two more TD drives in the second half, finishing off a 19-play one with a leap into the end zone for a 2-yard score that tied the game midway through the fourth quarter.

“It just shows the kind of player and the kind of football character he has,” Gruden said. “You lose Derek and then we change gears offensively. Marcus came in and did a great job. I’m really proud of him. That just puts an exclamation point on why we signed him. Just wish we could have won the game for him.”

They had their chances in overtime when they won the toss and drove down to have a first-and-goal from the 4. Josh Jacobs ran twice, losing 1 yard total on the plays, to set up a third down from the 5. Mariota couldn’t connect with covered fullback Alec Ingold in the flat and Gruden opted for a field goal instead of his fifth fourth-down try of the game.

“If it was a little bit closer, I would have considered going for it,” Gruden said. “I know I went for it a few times earlier in the game. But to take the lead with 3 minutes left, I thought was the play to make at that time.”

That proved costly when the Raiders defense couldn’t stop the Chargers in the first game since firing coordinator Paul Guenther and replacing him with Rod Marinelli. The fourth penalty of the game on cornerback Trayvon Mullen and a 53-yard pass to Jalen Guyton set up Justin Herbert’s 1-yard sneak that won it for the Chargers.

It was the kind of performance that made him the No. 2 overall pick in Tennessee but one he didn’t show enough with the Titans, leading him to lose his starting job last season to Ryan Tannehill and eventually land with the Raiders.

“It’s been a long journey,” he said. “I’ve been through kind of everything from injuries to surgeries to mental kind of lapses and the confidence thing. I just truly appreciate the Raiders and the entire organization for kind of helping me through that. I was trying to kind of find my way again and they gave me an opportunity to kind of take some time. They’re patient with me. I just appreciate the fact that they were willing to do that.”