Mayfield delivers strong message to Browns after loss in KC 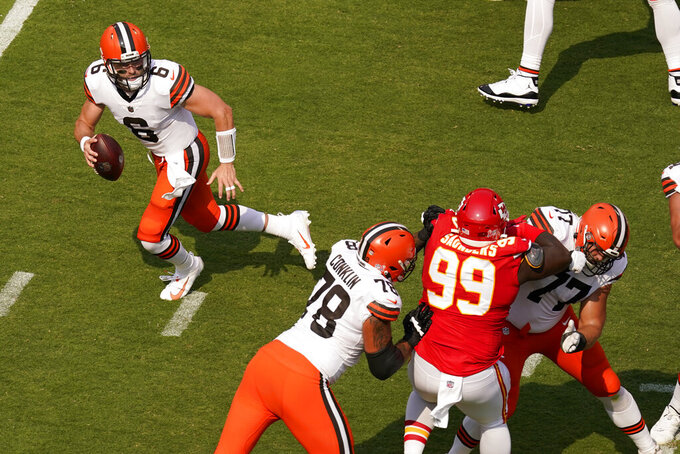 Moments after throwing a game-sealing interception with 1:09 left that gave the Chiefs a 33-29 win over the Browns in the season opener, Cleveland's quarterback quickly made sure his teammates kept the sickening loss in perspective.

When he entered the locker room, Mayfield overheard some conversations and noticed some of his teammates were either shaking their heads or hanging them.

That's when he stepped up.

“We should have won that game,” Mayfield said he told them. “But there's 16 more. ... Be critical of yourself, absolutely should be, and I’ll be damned if we’re not because we expect to go in there and win. But there’s also more opportunities, so you have to roll with the punches, face adversity, how do you handle it.

“This one should sting and you need to learn from it because we had that game and we gotta close it out.”

The message resonated with Nick Chubb, whose critical, momentum-swinging fumble in the third quarter contributed to the Browns blowing a 12-point halftime lead and failing to put away the reigning AFC champions.

“I was thinking like the season was over again because that’s how it ended last year,” the running back said Wednesday, recalling his feelings following Cleveland's 22-17 playoff loss to Kansas City in January. "I had to take a second, step back and realize we have 16 more to go.

"So it’s not the end of the world. We did lose, but we can correct some things. Me personally, I can correct a lot of things and we can go from there.”

As the Browns are moving forward toward Sunday's home opener against Houston, there's still some reflection going on after not finishing off the Chiefs.

For Mayfield, that last, forced pass seemed to eclipse all the good ones he made in a duel with Chiefs QB Patrick Mahomes.

Mayfield was poised to lead the Browns to a comeback win, but came up short. On first down at KC's 48, Mayfield moved up in the pocket to avoid a sack and as he tried to throw the ball out of bounds, safety Daniel Sorensen wrapped up his legs.

Mayfield's throw was short and an easy pick for cornerback Mike Hughes.

“Yeah, I definitely wasn’t trying to throw it straight to 21, that’s for damn sure,” Mayfield said, explaining his intentions. ”You can say throw it away earlier, but then the coaching points of me trying to use my legs and scramble out and take advantage of some of the yards, there’s going to be criticism either way regardless.

"Just try and find a way to not have a negative play.”

Mayfield's critics point out that the sequence underscores one of the knocks on him: not clutch. Or not clutch enough.

Mayfield has rallied the Browns in games over the past three seasons, but he also leads the league with 16 fourth-quarter interceptions since 2018. There may be some excuses for the turnovers — inexperience, tipped balls, coaching changes — but the numbers don't lie.

A tough self-evaluator, Mayfield said he’s hardest on himself for his late-game mistakes.

“It’s critical situations,” he said. "Those are the moments where you look back and everybody’s going to remember that last play and that can be the difference. No matter what has happened previously, you can throw all of that out the window as long as you have a chance and whoever has the ball last, if you can make a play those are the ones that matter.”

While the loss was tough for the Browns to swallow after outplaying the Chiefs for much of the game, there were plenty of positives. But just as with Mayfield's decisive pick, the good stuff was overshadowed by the bad.

And led to a loss.

"So as long as we handle it, it will be a blessing in disguise that it happened in Week 1 rather than later on down the road.”