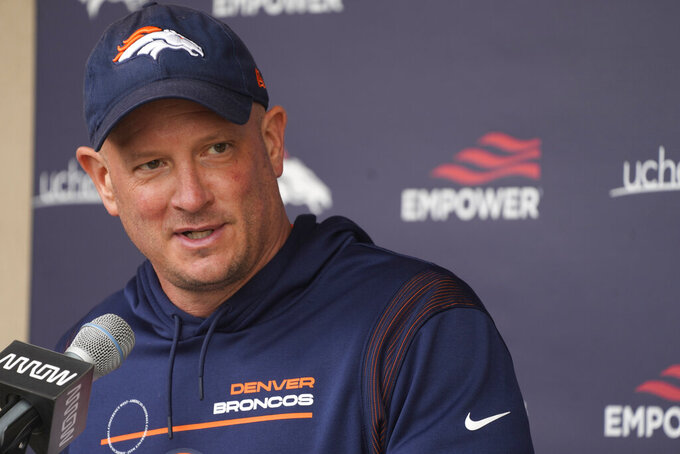 Josh McDaniels' first season coaching the Las Vegas Raiders is looking awfully similar to the way the end of his tenure in Denver went more a decade ago.

McDaniels will be looking for his first win for Las Vegas (0-3) on Sunday when he goes up against his former team as the struggling Raiders host the Broncos (2-1).

The Raiders have lost three games by a total of 13 points as they have fallen just short each week.

It just hasn't been good enough in what looks like a familiar pattern to the end of his tenure in Denver in 2009-10. McDaniels is now 5-20 as a head coach since winning his first six games in 2009 with the Broncos, going 1-10 in one-score games in that span.

McDaniels was fired during his second season in the aftermath of a video scandal, a player’s suicide and a 5-17 run that followed his 6-0 start. McDaniels heads into Sunday’s showdown against Denver having not won a game as an NFL head coach in 4,341 days.

"I’ve said this many times: They gave me a great opportunity at a young age and I’m thankful for that and learned a lot of lessons from that,” he said.

Denver also has a first-year coach, and Nathaniel Hackett has been under fire for questionable in-game management decisions that contributed to a Week 1 loss at Seattle and offensive struggles the past two weeks.

The Broncos are second-to-last in the league in scoring, averaging just 14.3 points per game as it is taking time for quarterback Russell Wilson and his new teammates to acclimate to a new system.

“Sometimes it happens quicker, sometimes it takes a little longer,” Hackett said. "In the end, as long as we’re continually learning from the different things and the guys are growing within the system, I think it’s going to be good.”

Wilson is all too familiar with Raiders edge rusher Chandler Jones after years of matching up together in the NFC West.

Jones’ 16 1/2 career sacks of Wilson are the second most for any player against a single quarterback since 2000. Only Cameron Jordan has more with 23 sacks against Matt Ryan.

Jones is still seeking his first sack since signing a three-year, $51 million contract with the Raiders this offseason.

“He’s a guy I’ve been with for the past three years. He’s an amazing human being, somebody that’s very dear to my heart,” Hackett said. “But at the same time, we've got to stop him.”

Hackett said that while his defense has played great – yielding just 12 points a game – Adams is a “great, great challenge for all. And it’s not just going to be one guy, it’s going to take the whole team to know where he is and how to stop him.”

The most puzzling part of the early season struggles for the Raiders has been the lack of involvement for Adams the past two weeks. After catching 10 passes for 141 yards in the opener, Adams has just seven catches for 48 yards the last two weeks for his least productive two-game stretch since his second season in Green Bay in 2015.

That's not what people expected when the Raiders traded a first and second-round pick to the Packers for Adams this offseason, reuniting him with his college quarterback Derek Carr.

“They didn’t see this together when they played before in college,” McDaniels said of the coverage focused on Adams. "That’s not what happened. So, they’re getting these different things and some of which Davante is more used to because he’s been played a little bit more like that. Now it’s the two of them getting used to it together.

"We have a responsibility to help those two guys continue to be productive as well. So, we’re all in it together.”

The Raiders have had the better of this rivalry in recent years, sweeping the season series the past two years.

The four-game winning streak is the longest for the Raiders against the Broncos since 2009-11, when they also won four straight, including two against McDaniels. The Raiders haven't won more than four straight against Denver since a six-game streak from 1992-94 that included a playoff win.

By Teresa M. Walker 19 minutes ago
By Arnie Stapleton an hour ago
2 hrs ago
By The Associated Press 5 hrs ago
By Fred Goodall 13 hrs ago