Minshewmania's next stop is in the Rocky Mountains 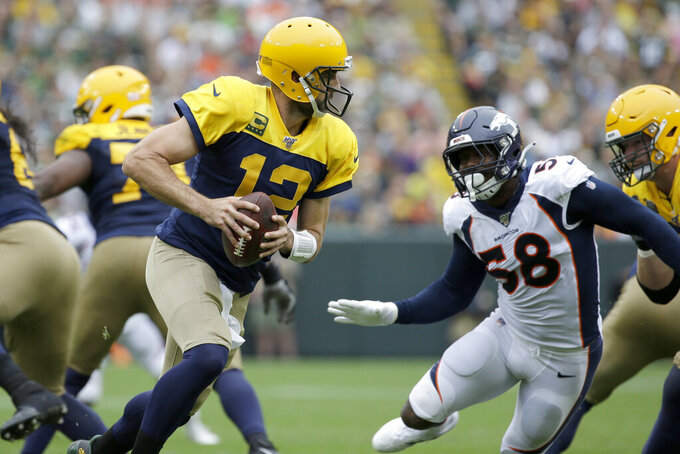 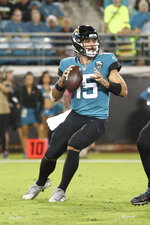 DENVER (AP) — He's the real-life Uncle Rico lookalike from Napoleon Dynamite, the "Mississippi Mustache," the rookie whose legend is growing faster than any of the more celebrated quarterbacks taking their lumps on the field or biding their time on the sideline.

Gardner Minshew II, who leads the Jaguars (1-2) into Denver on Sunday to face the unusually quiet Broncos (0-3), has been the biggest surprise in the NFL's 100th season.

That's not to suggest the sixth-round draft pick holds it against any of the league's other 31 teams for bypassing him until the Jaguars made him the 178th overall selection and the 10th quarterback taken in the draft.

Neither could the Jaguars, who gave Nick Foles a four-year, $88 million contract in April with the belief he would solve their two-decade-long search for a quarterback only to see him break his left collarbone in the first quarter of their opener against Kansas City.

Enter Minshew, who completed 22 of 25 passes for 275 yards with two TDs. His completion rate (88 percent) was the highest in league history for any quarterback with at least 15 pass attempts while making his debut.

It wasn't a fluke, either.

Minshew leads all NFL rookies with five TD throws and his 73.9 percent completion rate and 110.6 passer rating are both the highest by a rookie in his first three games in the Super Bowl era.

Minshew's path to the pros took him through Troy, Northwest Mississippi Community College, East Carolina and Washington State, where he threw for nearly 5,000 yards with 38 touchdowns last year.

"Minshewmania" has grown with the quirky quarterback's fashion sense , which ranges from jean shorts, or jorts, Hawaiian shirts and a thick headband to 1970s-style throwback suits as colorful as his personality.

"I have fun, but if you ask anybody in the building, they'll tell you how hard I work and how serious I do take it," Minshew said. "I just try to have as much fun as possible and that's why I play my best, too."

Minshew revealed this week that he once took a hammer to his right hand at East Carolina in a misguided attempt to extend his college playing career.

"That was really the only way for me to get a redshirt," explained Minshew, who failed, fortunately, to break his hand. "Looking back at it, it was pretty dumb. ... But I always tell people, what would you do to play more ball? And that's damn near anything."

"Hopefully it's after the game" and not in the backfield, Minshew said.

So far, that hasn't been a problem for Denver's opponents because the Broncos are still seeking their first sack and first takeaway even though Miller and Bradley Chubb have played 96 percent of the snaps.

"That's shocking," Minshew said. "I know a lot of people that are down on them, but they're a lot better than what their record says. ... They've got some serious talent over there, those two guys on the edges especially."

Other subplots as the Broncos seek to avoid their first 0-4 start since 1999:

Don't expect the Broncos to use all-out blitzes to end their sackless streak. "When you look over the years, we've coached a long, long time and you've got to stay the course and you've got to trust in your beliefs," defensive coordinator Ed Donatell said. "We don't go nuts."

Jaguars DE Calais Campbell was born and raised in Denver. He attended South High, where he played football, basketball and track and field. He has 28 sacks since spurning his hometown team and signing with Jacksonville in 2017.

The Broncos two free agent DBs are both banged up. Bryce Callahan (foot) is out for at least another month and Kareem Jackson (hamstring) is questionable, meaning another newcomer, Duke Dawson Jr., could get his first significant action.

Disgruntled Jaguars star CB Jalen Ramsey could miss a game for the first time in his four-year career after leaving the team to be with his family for the birth of his second child. Ramsey asked for a trade following his blow-up with head coach Doug Marrone on the sideline earlier this month, then said he was sick and had a sore back before taking paternity leave.

Minshew isn't concerned about the altitude in the Mile High City. He played well in Boulder last year in leading Washington State past Colorado 31-7. "We should have beaten them worse," Minshew said. "I remember the buffalo — that was freaking awesome — running around the field. That was a lot of fun."