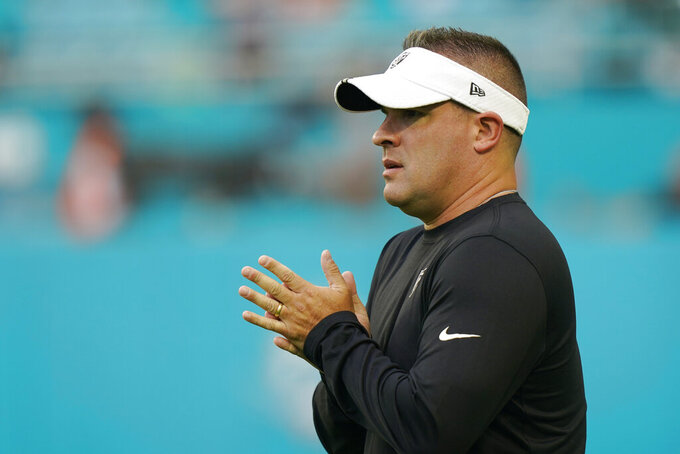 STRENGTHS: Receiving options. The addition of Adams as the No. 1 receiver gives QB Derek Carr one of the best pass-catching trios in the NFL. Adams has averaged 108 catches per season the past four years, TE Darren Waller is one of the best at his position and slot WR Hunter Renfrow had 103 catches for 1,038 yards last season. If the Raiders can find one more capable WR out of Robertson, Hollins or Cole, they should be well positioned to have one of the most productive passing offenses in the league.

WEAKNESSES: Offensive line. The main thing that could slow down that passing attack is a suspect offensive line. While LT Kolton Miller has proven to be very dependable protecting Carr's blind side, there are questions at the other four spots. The biggest issue is at RT where last year's first-round pick Alex Leatherwood failed at last year before moving inside and is trying to get another shot this season. C Andre James is a decent option but there are questions at both guard spots with returning starter John Simpson and third-round pick Dylan Parham the best options.

CAMP DEVELOPMENT: The new regime led by McDaniels and Ziegler sent a message when they declined to pick up the fifth-year option on RB Josh Jacobs. That has only been reinforced this summer with Jacobs getting rare preseason action as it appears his role as the bell-cow back is far from solidified. McDaniels used a running back by committee approach in New England which could lead to a job share with Brandon Bolden and rookie Zamir White among others.

FANTASY PLAYER TO WATCH: Adams led the NFL with 432 catches, 5,310 yards and 47 TDs the past four seasons when he was catching passes from Aaron Rodgers in Green Bay. He decided to give that up to join his close friend and former college teammate Carr in Las Vegas. Whether he can match those gaudy numbers without Rodgers throwing him passes remains to be seen, especially with more pass-catching options on the Raiders.

EXPECTATIONS: After adding Adams and Jones to a team that made the playoffs in 2021, the expectations are high in Las Vegas in McDaniels’ first season. But the problem for the Raiders is their division is brutal and they overachieved last season by winning 10 games despite getting outscored by 65 points. But if the additions of Adams and McDaniels can make the offense elite and the defense does a better job creating turnovers, the Raiders could be in the mix.