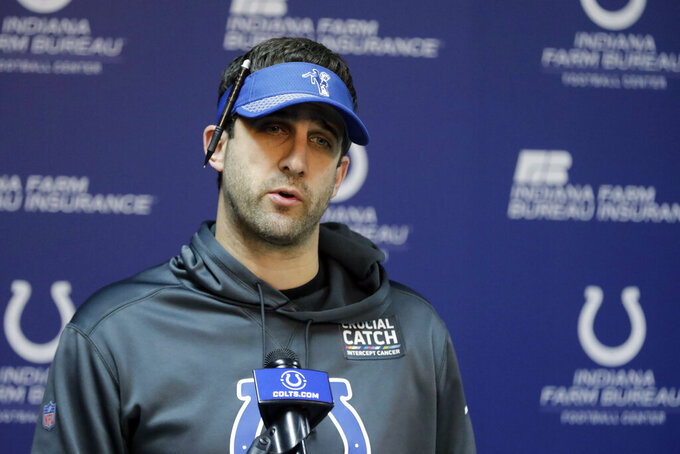 FILE- In this Wednesday, Jan. 2, 2019, file photo, Indianapolis Colts offensive coordinator Nick Sirianni speaks during a news conference at the NFL football team's facility in Indianapolis. The Philadelphia Eagles are nearing a deal to hire Nick Sirianni to be their head coach, according to two people familiar with the decision. Both people spoke to The Associated Press Thursday, Jan. 21, 2021, on condition of anonymity because the team hasn't officially announced the hiring. (AP Photo/Darron Cummings, File)

PHILADELPHIA (AP) — Nick Sirianni outlined his core principles, explained his coaching philosophy and dodged questions he can’t answer yet about a quarterback controversy.

Eight days after the Philadelphia Eagles picked him to replace Doug Pederson, Sirianni stood in an empty auditorium and talked to a camera for more than 40 minutes during a virtual news conference Friday.

Sirianni values connecting, competing and accountability. He wants to build a smart team and emphasizes fundamentals.

Despite his passion for competition, Sirianni wasn’t ready to say whether Carson Wentz and Jalen Hurts would battle for the starting job. He spoke to both quarterbacks and is eager to work with them.

“They’re top-notch quarterbacks,” Sirianni said. “A lot of teams don’t have any. Just really excited to work with both of them.”

Sirianni, who was the offensive coordinator for the Colts the past three seasons, worked with Andrew Luck, Jacoby Brissett and Philip Rivers in Indianapolis.

“Those three teams looked different. They were all different in their own ways of how we attacked defenses and how we played the game,” Sirianni said. “I think that’s the sign of a good coach, that you’re going to change based off of your personnel, right? We have a certain personnel in place. We’re going to figure out what they can do well and what their strengths are, and we’re going to play to their strengths and we are going to try to keep them out of situations that they don’t excel well at.”

The 39-year-old Sirianni worked in Indianapolis under coach Frank Reich, who was offensive coordinator in Philadelphia when the Eagles won the Super Bowl three years ago.

The Eagles fired Pederson following a 4-11-1 season, less than three years after he led the team to the franchise’s only Super Bowl title.

“Nick just shined throughout the process from the very beginning,” owner Jeffrey Lurie said. “The research on Nick was terrific. It was somebody that knew the game as well as anybody, football IQ off the charts, a grinder, somebody that had an unlimited work ethic and a desire to be great.

"He always had coaching in mind from his very beginning. His family background, his brothers, his dad, of course. I just think it’s somebody who has wanted to excel in this profession for so long, has excelled, and is more than ready to take the next step.”