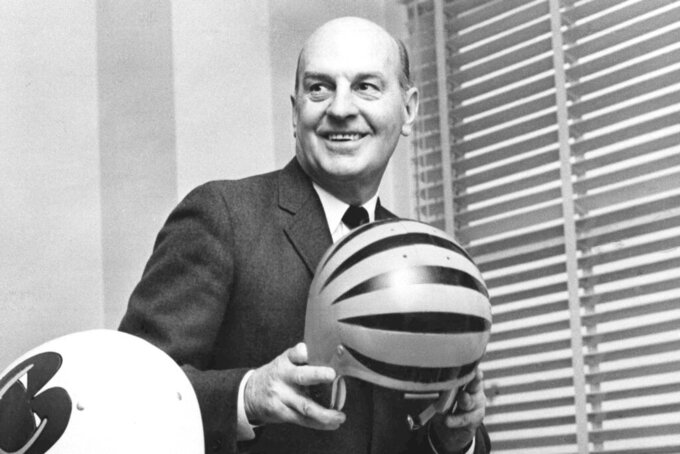 FILE -This is a Jan. 3, 1968, file photo, showing Paul Brown, president of the Cincinnati Bengals. In Ohio, Brown was synonymous with football. He led Ohio State to its first national title before becoming head coach of the Browns, who won four All-America Football Conference titles and then three in the NFL under Brown. (AP Photo/File) 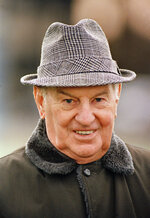 As part of its celebration of its 100th season, the NFL is designating a Game of the Week, each chosen to highlight a classic matchup. For this week, it’s the Browns-Bengals game.

To mark each Game of the Week, the AP will be reprinting its story of a classic matchup in the rivalry. The following is story from Cincinnati Bengals coach Paul Brown’s 1970 victory over the team he founded, the Cleveland Browns.

CINCINNATI (AP) — That 14-10 football victory Cincinnati sprung on Cleveland Sunday wasn’t only good tonic for Paul Brown, it was an elixir for the Bengals too.

“Believe it or not, and it’s hard to believe, we can still win it,” said Linebacker Bill Bergey, who hounded the Browns and Leroy Kelly to the delight of a record Riverfront Stadium crowd of 60,007.

The triumph was the biggest of his 36-year career, Brown admitted, and more importantly thrust the Bengals (3-6) only one game behind the Browns and the Steelers (4-5) for the American Conference Central Division lead.

“Eighty per cent of the other teams would love to be in our division. We didn’t think we were out of it when we lost our sixth game,” Virgil Carter, the offensive hero for the Bengals, said.

Carter ran for 110 yards and passed one 13-yard touchdown to Jess Phillips as Cincinnati avenged an earlier 30-27 setback in Cleveland.

Brown’s emotions exploded after his new team had whipped the one he founded, coached for 17 seasons before being fired by owner Art Modell in 1962. He leaped in the air, lofted his hat skyward and raced off the field ahead of his players.

“That’s the greatest victory of my career,” Brown said, and his talents have produced 306 triumphs and only 101 losses and 16 ties in all levels of competition. “It sure makes it feel like it was all worthwhile to come to this,” he said, a wide smile on his usually taciturn face.

“It tickled me to have the coach say ‘win it for yourselves, not for me,’ before the game,” said Bergey. The 236-pound, second-year man was one of the main reasons Kelly was halted on 60 rushing yards and the Browns’ patented sweep was nullified.

Kelly ran nine yards in the first quarter and Don Cockroft kicked a 15-yard field goal in the second period to shove Cleveland into a 10-0 lead in the first 18 minutes.

Phillips’ diving catch at the goal line cut the margin to 10-7 at halftime and Paul Robinson capped an 85-yard march from one yard out for the go-ahead Bengals touchdown in the third quarter.

“If Kansas City beats Cleveland next week, we’re in first place if we beat the Steelers,” Bergey said. “We’re all optimistic and I’m really excited.”

“Errors, and particularly penalties, hurt us,” Browns Coach Blanton Collier said of Cleveland’s third successive setback, the first time that’s happened in the NFL for his team in 11 seasons.