NFL at 100: Eagles upset Patriots, give Philly a special win 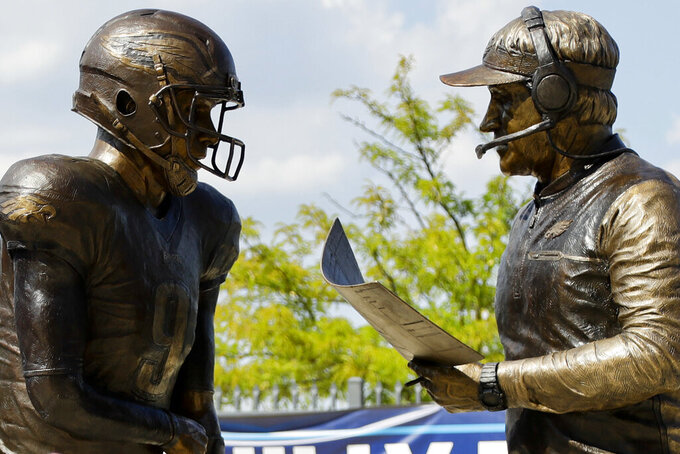 FILE - In this Sept. 5, 2018, file photo, a bronze statue depicting Philadelphia Eagles quarterback Nick Foles, left, and head coach Doug Pederson discussing the "Philly Special" trick play is seen at Lincoln Financial Field, in Philadelphia. Facing the mighty New England Patriots on the NFL's biggest stage, Philadelphia Eagles coach Doug Pederson's decision to try a trick play _ the "Philly Special" _ on a fourth down late in the first half of Super Bowl 52 will be remembered as one of the gutsiest calls in sports history. (AP Photo/Matt Slocum, FIle)

PHILADELPHIA (AP) — Rookie running back Corey Clement took the snap out of shotgun formation, rolled to his left and pitched the ball to third-string tight end Trey Burton, who caught it coming off the end, ran a few steps and floated a pass to backup quarterback Nick Foles in the end zone for a touchdown.

Facing the mighty New England Patriots on the NFL's biggest stage, Philadelphia Eagles coach Doug Pederson made a decision to try a trick play — the "Philly Special " — on a fourth down late in the first half of Super Bowl 52 that will be remembered as one of the gutsiest calls in sports history.

Moreover, it helped the Eagles upset the Patriots 41-33 on Feb. 4, 2018, to capture the franchise's first Super Bowl title in one of the wildest games ever played.

Pederson had already earned a reputation in just two seasons as head coach for being aggressive and he had a knack for going for it on fourth down. He knew he had to stay true to form to have a chance against Bill Belichick, Tom Brady and the Patriots.

"Everybody except the Philadelphia Eagles thought I finally came to my senses and was going to kick a field goal in that spot," Pederson recalled. "It was the right moment, right time, perfect situation."

The Eagles were leading 15-12 and had the ball at the Patriots 1 with 34 seconds remaining in the second quarter when Foles walked over to Pederson during a timeout.

Pederson looked at his chart, took a second to collect his thoughts and replied: "Yeah, let's do it."

The players executed it perfectly.

Foles faked calling audible and moved up to act like he was alerting the offensive linemen of a new play. Clement, who had four catches for 100 yards in the game, was in position to take the direct snap from center Jason Kelce. Burton, a quarterback in high school who hadn't thrown a pass since his college days at Florida, took the pitch from Clement and softly threw it right to a wide-open Foles to give Philadelphia a 22-12 halftime lead.

One of Philadelphia's assistant coaches saw the Chicago Bears use the play a year earlier and the Eagles worked on it for weeks. Pederson planned to use it in the playoffs but didn't get a chance the first two games. It was supposed to be called on second or third down so the offense would get another chance to convert in case the pass fell incomplete. But Pederson couldn't resist when Foles suggested it.

"Plays like that just don't happen if you don't work them in practice, but you've got to have belief first that they're going to work," Pederson said. "You've got to believe it's going to work before it happens."

That signature moment between Foles and Pederson standing on the sideline discussing the play was turned into a 9-foot, bronze statue that sits outside the team's stadium as a reminder of the greatest play in franchise history. Generations of Eagles fans had waited 58 years to celebrate a championship.

The Eagles hadn't won an NFL title since 1960. They lost to Oakland in January 1981 and New England in February 2005 in their only two previous Super Bowl appearances. Meanwhile, Belichick and Brady had won five championships since 2001 and were going for consecutive titles.

Few gave Philly a chance after franchise quarterback Carson Wentz tore two knee ligaments in Week 14. Foles stepped in and helped the team finish 13-3. But the Eagles were the first No. 1 seed to start the playoffs as an underdog. Players used that oddsmakers' slight as motivation and wore dog masks throughout their playoff run. The defense stood out in a victory over the Falcons and Foles was spectacular in a rout over the Vikings in the NFC championship game.

The Eagles were 4 1/2-point underdogs against the Patriots in frigid Minnesota where the temperature was 2 degrees at kickoff, but it was beautiful inside the dome.

Philadelphia jumped ahead 9-3 when Alshon Jeffery made an excellent grab on Foles' 34-yard TD pass. LeGarrette Blount's 21-yard TD run against his former team made it 15-3 midway through the second quarter. Then came Burton to Foles.

Down 10 to start the second half, the Patriots rallied. Everyone knew they would. A year earlier, they overcame a 28-3 deficit with 18 minutes left and beat the Falcons 34-38 in overtime to win their fifth Super Bowl.

Brady's 5-yard TD pass to Rob Gronkowski cut it to 22-19. After Clement caught a 22-yard TD pass in the back of the end zone to extend Philadelphia's lead to 29-19, Brady connected with Chris Hogan on a 26-yard TD pass to get New England within a field goal.

But Philadelphia answered after Pederson made another aggressive decision. He went for fourth-and-1 from the Eagles 45 with 5:39 remaining and three timeouts in hand. Foles found Zach Ertz for a 2-yard gain to keep the drive going. Then on third-and-7, Ertz made a juggling 11-yard TD catch for a 38-33 lead. The celebration had to wait for a video review, which upheld that Ertz had already established possession of the ball before he bobbled it on the ground.

Brady and the Patriots had a little over two minutes to force overtime, but Brandon Graham's strip-sack was the defensive stop Philadelphia desperately needed. After a field goal increased the lead to 41-33, Brady drove New England to midfield before his desperation heave at the end fell incomplete.

Philly fans who flooded Minnesota throughout the week sang "Fly! Eagles! Fly!" as tears of joy streamed down their faces.

The Eagles and Patriots set or tied 29 Super Bowl records in a thrilling contest. The teams combined for 1,151 yards, most in any game. The Patriots didn't punt. Brady threw for 505 yards and the Patriots racked up 631 total yards. The teams combined to miss four point-after conversions. New England's 33 points were the most by a losing team.

Here's a look at how Philadelphia's victory over the Patriots 21 months ago affected each team the following season as the teams prepare for a rematch Sunday:

The dynasty didn't end with the loss to the Eagles. The Patriots took a different, tougher road to get there again, but they came out on top after the 2018 season.

Brady was clutch on the road in Kansas City in the AFC championship game and the Patriots beat the Chiefs and the dynamic Patrick Mahomes 37-31 in overtime.

The defense held the high-powered Los Angeles Rams to a field goal and the Patriots captured their sixth Super Bowl title with a 13-3 victory.

And they are still going strong.

The Patriots (8-1) and their 42-year-old quarterback are heading toward another AFC East title. They have a one-game lead over Baltimore (7-2) for the top spot in the conference, so they can't afford a letdown against the Eagles.

The Eagles fell short in their bid to win consecutive Super Bowl titles, losing 20-14 at New Orleans in the divisional round of the playoffs after Foles led them to a wild-card win at Chicago helped by Cody Parkey's "double doink" kick at the end.

Foles stepped in again after Wentz suffered a season-ending back injury and led the team to a 5-2 record, including playoffs. The Eagles were 5-6 with Wentz, but there was no quarterback controversy.

Foles signed with Jacksonville in free agency and Wentz got a lucrative contract extension. This season, the Eagles (5-4) have been plagued by injuries and inconsistency but have won two in a row and are battling Dallas (5-4) in the NFC East.

The Eagles lead the series 8-6, including a Super Bowl win for each team.