NFL At 100: Rooney Rule has its positives and its faults 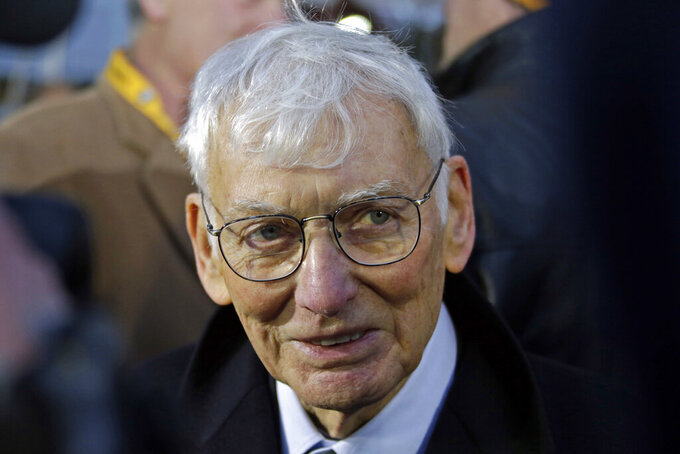 File-This Dec. 22, 2012, file photo shows Pittsburgh Steelers chairman emeritus Dan Rooney attending the unveiling of a marker commemorating the 40th anniversary of the "Immaculate Reception" at the sight of the catch on the Northside of Pittsburgh. In 2003, the NFL had three minority head coaches: future Pro Football Hall of Famer Tony Dungy, Herman Edwards and Marvin Lewis. In the 12 previous seasons, there had been six. Total. Considering that the majority of the players in the league 16 years ago were minorities, that imbalance was enormous. And disturbing. And, frankly, it was unfair. Paul Tagliabue, then the NFL commissioner, put together a committee that established the "Rooney Rule," which requires all teams with coaching and front office vacancies to interview minority candidates. The rule, long overdue, was named for Rooney, then president of the Pittsburgh Steelers and the overseer of that committee. (AP Photo/Gene J. Puskar, File)

In the 12 previous seasons, there had been six. Total.

Considering that the majority of the players in the league 16 years ago were minorities, that imbalance was enormous. And disturbing.

Paul Tagliabue, then the NFL commissioner, put together a committee that established the "Rooney Rule," which requires all teams with coaching and front office vacancies to interview minority candidates. The rule, long overdue, was named for the late Dan Rooney, then president of the Pittsburgh Steelers and head of that committee.

Rooney, one of the league's most enlightened and free-thinking owners, recognized that opportunities for minority coaching candidates were far too limited throughout the NFL — even in searches for assistant coaches.

"Like the commissioner, he understood there was a gap that needed to be addressed immediately," says Art Rooney II, Dan's son and now Steelers president. "We needed to make major steps in the area of minority hirings, and it needed to be done in a manner that was clear to all franchises, and completely transparent."

When initiated, the Rooney Rule was a trendsetter for professional sports organizations. Quickly, there was a more steady stream of minority candidates getting interviewed, and by 2006, there were seven minority head coaches.

"I thought it was going to be difficult to implement the rule right way and that there would be a disconnect with what Dan had in mind, and how to execute it," says Dungy. "Dan was one of most up-front people you would ever meet and his idea was if it would cause people to slow the process down and investigate more thoroughly, then they would do a good job. And people who deserve an opportunity — whether minorities or not — will automatically come to the top.

"People would dig and dig and come up with good people, and in theory it is a good idea, and when people do it, I think they do uncover good candidates, whether minorities or not."

The numbers have fluctuated through the years — as they have among front office personnel. But it never has kept up with the percentage of minority players.

There is particular concern today regarding diversity in the existing structure for hiring of assistant coaches. Art Rooney has expressed such concerns, and Troy Vincent, the NFL's football operations chief and highest-ranking African American, joined the league's diversity committee this year.

In theory, that should never have become an issue. What Dan Rooney, Tagliabue, and the Fritz Pollard Alliance that champions diversity in the NFL envisioned has not exactly come to fruition.

One issue often mentioned is tokenism. How real are the interviews given to minority candidates? Are they simply brought in to comply with the Rooney Rule even as teams have no intent of hiring them?

That, of course, can be true for any candidates. But if it happens to minorities — many backers of more diversity within the league would say “when it happens” — it's clearly a violation of the spirit of Dan Rooney's vision.

"It is an issue that occurs," Art Rooney says, "and when it does, it's a setback for diverse hiring, for sure."

One case that caused a stir came after the 2017 season, when the Raiders sought a new head coach and almost immediately turned to Jon Gruden. Certainly being able to rehire Gruden, the last coach to have a steady winner in Oakland and a man who parried all advances by NFL teams while he worked as an ESPN analyst for nine years, was a coup. But there was a storm of suspicions that the team didn't bother with the parameters of the Rooney Rule.

The Pollard Alliance lodged a complaint with the NFL after Raiders owner Mark Davis said he'd decided on Gruden even before minority candidates were interviewed by GM Reggie McKenzie. Davis hired Gruden, and the league found no violations: two black assistants — Tee Martin of USC, and the Raiders' Bobby Johnson — were interviewed.

Dungy is troubled by such machinations.

"If you just say, `I am going to satisfy the letter of law, interview a minority candidate and then hire who I want anyway,' then of course it doesn't work, and it creates hard feelings," Dungy says. "And that is what happens more and more. An owner wants an offensive coach, maybe a quarterbacks guy, so he interviews a defensive backfield coach who is a minority to satisfy (the Rooney Rule). And then he hires the offensive guy he wanted all along.

"I see that more and more from the way things take place, the rule not working. But I can remember when it has worked. Like when Bill Parcells was in Miami and talked to (Dungy protege) Leslie Frazier and didn't hire him. But he came away with an understanding of who Leslie was and he talked to others about him around the league. Bill said, `This is a good coach and you ought to take a look at him,' and that is how it is supposed to work."

It did as Frazier became the Vikings’ head coach in 2010.

Art Rooney and Commissioner Roger Goodell disagreed this year on how to measure the effect of the rule. Goodell reasoned it can't be measured in one-year increments after five minority head coaches were fired and only Miami's Brian Flores was hired. Art Rooney insisted that is exactly how to judge the progress — or lack thereof.

Regardless, the Rooney Rule has had a positive impact, and not only in the NFL. Art Rooney has seen it spread to other sports leagues and to companies in general. He knows his father and Tagliabue created something significant and everlasting.

"It is a good rule, an important rule," he says, "and we will continue implementing is as it was designed. That's the right thing to do."