NFL committee to decide whether to tweak interference rule 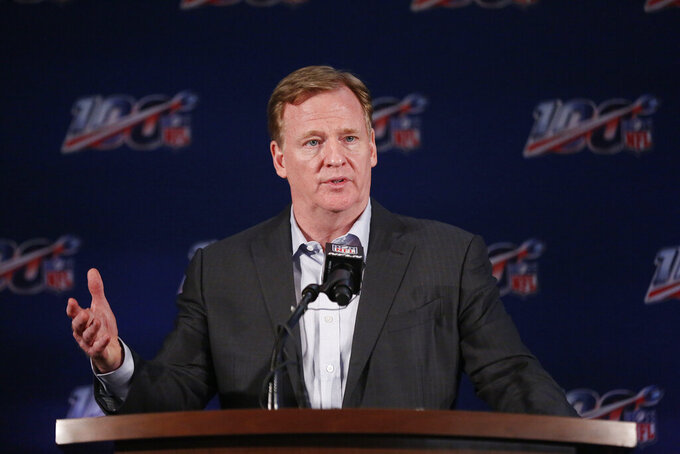 Owners voted to hold the NFL draft in Cleveland in 2021, the 75th anniversary of the Browns, and in Kansas City in 2023. The league said it delayed choosing a site for 2022 because about 20 cities are interested in hosting that year.

Regarding pass interference, the league fears too many stoppages of play in the closing minutes if those reviews are left up to the officials. A decision on whether to require a coach's challenge in the final two minutes will come after the competition committee consults with coaches next month.

Owners voted in March to allow pass interference calls or non-calls to be challenged by coaches and reviewed via replay as a one-year experiment. Under the rule adopted then, in the final two minutes only officials in the booth can stop the game for reviews involving pass interference, as is the case with other reviewable plays.

The competition committee may also exempt Hail Mary passes so they're not reviewable. That change would require coming up with a formal definition of a Hail Mary.

"We really don't want our games to end on a review," said Atlanta Falcons president and CEO Rich McKay, a member of the committee.

A proposed rule change requiring each team to have one possession in overtime was tabled for lack of support. The change was pushed by the Chiefs, who lost last season's AFC championship game without getting the ball in overtime because the Patriots won the toss, received the kickoff and scored a touchdown.

There's some support among owners to change the overtime rule in the postseason only, football operations chief Troy Vincent said. The league is expected to revisit the subject next year.

The 2021 draft is the latest major sports event landed by Cleveland.

"It's a big, big deal for our area, one of the founding areas of the NFL," Browns owner Jimmy Haslam said.

—Owners voted to eliminate the so-called Oklahoma drill and similar drills that involve especially violent one-on-one contact and have historically been popular early in training camp. A study found one of every five concussions during an NFL season occurs in the first two weeks of camp.

"We saw a certain area at the beginning of training camp where we felt could make greater improvement," Commissioner Roger Goodell said, "and I think removing some of these drills across all 32 teams is the right way to do that. We also believe by prohibiting some of these drills, that will happen at the college and high school and youth football levels, which we believe should happen."

The ban follows an examination of data and practice video with coaches, general managers and former players.

"I think some of the coaches were a little defensive at the start, and probably the biggest advocates at the end," McKay said.

—Marijuana for pain management will be studied by a new committee of medical experts appointed by the league and players union as part of an effort to address player health. Marijuana is banned by the league.

"There are a lot of alternative pain medications and treatments," Goodell said. "Those are the types of things we want this committee to focus on. One of those is what role medical marijuana can have."

—Goodell said the NFL will wait to decide the status of suspended Chiefs receiver Tyreek Hill, who is the subject of a domestic violence investigation. "We will not interfere with that," Goodell said. "We will obviously be cooperative with whatever the court wants. We are prepared to have an interview whenever we have the permission to do so, and then we'll make a determination."

—League officials also announced that the NFL's annual scouting combine will continue to be held in Indianapolis, though it will be moving many of the workout drills to the afternoon and prime time in hopes of expanding the television audience. Those drills have traditionally been held in the morning and afternoon.

Colts owner Jim Irsay wrote on Twitter that after 2021, there will be a series of one-year options to keep the combine in Indy.

—Sunday divisional playoff games will now start at 3 p.m. and 6:30 p.m. EST to match the starting times for the conference title games the next Sunday. The idea is to increase ratings.

— Assistant and positional coaches in the NFL and college have been invited to attend a coaching summit June 24-25 in Atlanta as part of an effort to strengthen the coaching and personnel development pipeline.

—The league said more than 800 youth football summer camps and activities will be hosted this year by current players, former players, coaches and teams.