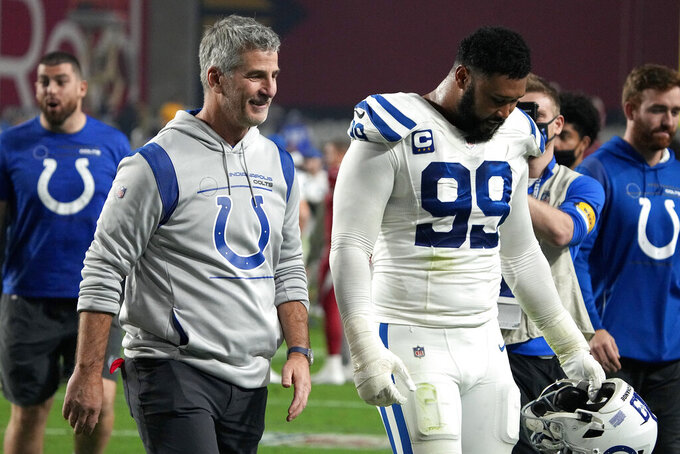 The NFL is reducing isolation time for players who test positive for COVID-19 and are asymptomatic, including unvaccinated players, to five days from 10.

The league and the NFL Players Association revised the protocols on Tuesday after the CDC changed its guidelines for those who are asymptomatic, recommending a five-day isolation period and masking over the second five days.

The changes could allow Colts quarterback Carson Wentz to return for Sunday’s key game against Las Vegas after Indianapolis placed him on the reserve/COVID-19 list.

It was not immediately clear whether Wentz, who is unvaccinated, tested positive for the virus or was deemed a close contact to someone else who had tested positive. However, if Wentz has no symptoms, he could be cleared to play.

In a memo sent to teams and obtained by The Associated Press, players and essential football personnel can return under the following conditions:

— Five days have passed since a positive COVID-19 test.

— At least 24 hours have passed since the individual last had a fever without the use of fever-reducing medications.

— Other symptoms, including a cough, have resolved or improved.

— The club’s head primary care sports medicine physician, after consultation with Infection Control for Sports and notification of the NFL chief medical officer, determines that the individual may return to the club facility and interact with other club employees/contractors.

— Any local regulations or requirements are satisfied.

Fully vaccinated individuals may continue to “test out” of isolation sooner than five days after the positive test, and should stop testing at Day 5 and return under the updated guidance, assuming all other perquisites have been satisfied.

Masks must be worn on the sideline and at all times except when playing and practicing for five days after return.

Masks must be worn by all players and staff indoors at team facilities. Players and staff are not permitted to eat together. A limit of 15 people applies for weight rooms. Also, even fully vaccinated staff and players are encouraged to avoid public areas including restaurants, bars and social gatherings.

The Tennessee Titans, who can clinch the AFC South with either a win or a Colts loss, added linebacker Jayon Brown and practice squad receiver Cody Hollister, who has played three of the past four games including one start. They later added defensive end Denico Autry, who has eight sacks this season, to bring the Titans’ total to 10, not counting an 11th player out for the season on injured reserve.

The timing couldn’t be worse for the Colts, who have rebounded from a 1-4 start to win eight of their past 10. They can clinch one of the seven AFC playoff spots with a win over the Raiders.

Wentz’s backup is rookie Sam Ehlinger, who has played in three games but has not thrown a pass this season. He was a sixth-round draft pick. Veteran Brett Hundley and James Morgan are on Indy’s practice squad. Hundley has gone 3-6 as a starter during his NFL career.

Indy won Saturday at Arizona despite missing six starters because of COVID-19 and losing two more in the first half. The absences forced the Colts to play with only one of their five regular offensive line starters, Smith.

It’s unclear how many, if any, of those players may return Sunday.

Arians said in a statement released by the team: “I tested positive for COVID-19 this morning but have only experienced mild symptoms to this point. Harold Goodwin will take over my duties during my absence. I have complete confidence in him and the rest of our coaching staff to prepare the team for this week’s game against the Jets. I look forward to rejoining the team and being back in the facility as soon as I can test back in.”

Meanwhile, the Bucs also placed cornerbacks Jamel Dean and Sean Murphy-Bunting on the reserve/COVID-19 list. That increases the number of Tampa Bay players on the list to five.

— Patriots rookie quarterback Mac Jones could be without his top backup against the Jaguars after veteran Brian Hoyer was added to the reserve/COVID-19 list, along with linebackers Josh Uche and Brandon King.

Hoyer, who is on his fourth stint in New England, has previously served in backup roles to Tom Brady and Cam Newton. He has been Jones’ backup for each of the first 15 games this season.

If Hoyer is unavailable, 2019 fourth-round pick Jarrett Stidham could move into that role. The promotion would come a little more than a month after Stidham was added back onto the active roster after starting the season on injured reserve with a back injury. He has appeared in eight career games.

Hoyer, Uche and King make it five Patriots players who have been added to the COVID-19 list in two days. Linebackers Matt Judon and Ja’Whaun Bentley, two of the Patriots' most productive defensive players, were added Monday. While New England has some depth at linebacker, Judon has been its best pass rusher and leads the team with 12 1/2 sacks.

Linebackers coach Jerod Mayo said Tuesday that the team is prepared to adjust as necessary on defense.

“We still have guys in our room that played a lot of ball, and I would also say, you either can replace people with another person or you can replace it through scheme,” Mayo said. “So we’re still going through that process right now. Who do we want to put out on the field, what the game plan is for this week, but at the end of the day, the guys that are out there, they’ll be ready to go. Hopefully we get those guys back, but just like I said earlier, we’ve just got to treat it as an injury.”

— The Baltimore Ravens lost another starter to the reserve/COVID-19 list, putting linebacker Tyus Bowser on it Tuesday. Bowser has a career-high six sacks on the season. The Ravens also put defensive back Ar’Darius Washington on the list. They did activate cornerback Chris Westry from the list.

— The Cincinnati Bengals placed wide receiver Auden Tate on the reserve/COVID-19 list. Tate hasn’t played since Week 7 and is on injured reserve because of a calf injury.