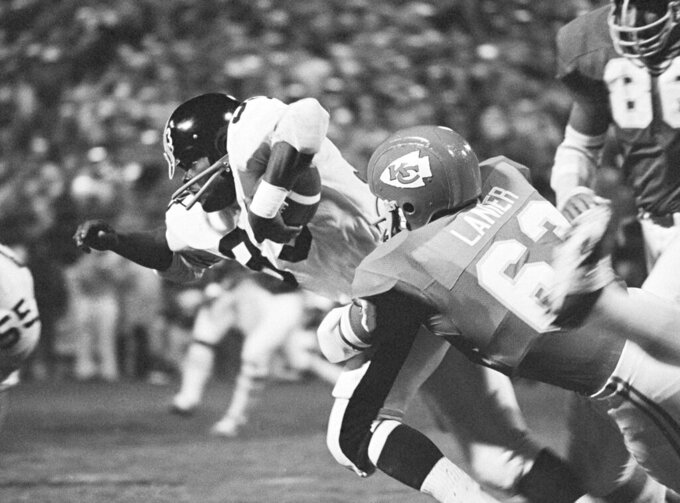 FILE - In this Oct. 19, 1971, file photo, Pittsburgh Steelers' John Fuqua (33) is brought down Kansas City Chiefs' Willie Lanier after a 3-yard game during an NFL football game in Kansas City, Mo. Lanier was one of the first black middle linebackers in pro football, breaking a barrier that kept minorities from playing the position regarded as the "quarterback of the defense." Lanier was a key part of the Kansas City defense that dominated the AFL and won a Super Bowl following the 1969 season. (AP Photo/William Straeter, File)

From groundbreaking coaches who set the path for others to follow to players who broke the stereotypes surrounding positions like quarterback and middle linebacker, several minorities highlighted the list of the NFL's greatest game changers, Nos. 31-100.

The NFL revealed results Friday night of balloting conducted by The Associated Press in conjunction with the league's celebration of its 100th season. The top 30 in voting by a nationwide panel of 57 football historians and media who regularly cover the NFL will be announced next Friday night.

The introduction of Astroturf, which allowed for a faster game and the possibility of domes, but also contributed to an increase in injuries, came in at No. 31 but the list was filled with several minorities who made major impacts on pro football.

Coming in at No. 35 was Fritz Pollard, who was one of the first two African American players in the NFL back in its initial season in 1920 and the only black coach in the league until Art Shell was hired by the Raiders in 1989.

The Fritz Pollard Alliance was named for the trailblazer and is an advocacy group fighting for more coaching opportunities for minorities today.

Pollard's legacy was carried on by Tony Dungy, who was hired by Tampa Bay in 1996 and was the first black coach to win the Super Bowl following the 2006 season with Indianapolis. He came in at No. 52 on the list.

Also appearing on the list released Friday were a pair of quarterbacks with Warren Moon coming in at 53rd and Randall Cunningham at 88th.

Moon went undrafted after a stellar college career at Washington and was forced to play in Canada where he won two Grey Cup MVP awards in the CFL title game and was the most outstanding player in the league in 1983.

He finally got his shot in the NFL the following year with Houston and went on to throw for 49,325 yards in a Hall of Fame career that would have been even more prolific if he hadn't spent his first six seasons in Canada.

Cunningham was drafted in the second round by Philadelphia the year after Moon made his NFL debut and helped pave the way for the modern dual-threat QBs who are as adept as runners as they are as passers.

Two decades earlier, Willie Lanier was one of the first black middle linebackers in pro football, breaking a barrier that kept minorities from playing the position regarded as the "quarterback of the defense." Lanier was a key part of the Kansas City defense that dominated the AFL and won a Super Bowl following the 1969 season, earning him 90th place.

Another group of women made it as well with the Dallas Cowboys cheerleaders ranking 37th.

There were several television related innovations that also got votes, including ESPN's must-watch highlight show "NFL Primetime" that launched in 1987 long before the Red Zone channel made seeing highlights so universal at No. 44; Fox's entry into NFL coverage in 1994 with the ubiquitous time and score box and other innovations at No. 50; and ESPN draft guru Mel Kiper Jr. at 64.

Deacon Jones came in at 34th for coining the term "sack" for bringing down quarterbacks and Pete Gogolak was 56th for becoming the first soccer-style field goal kicker.