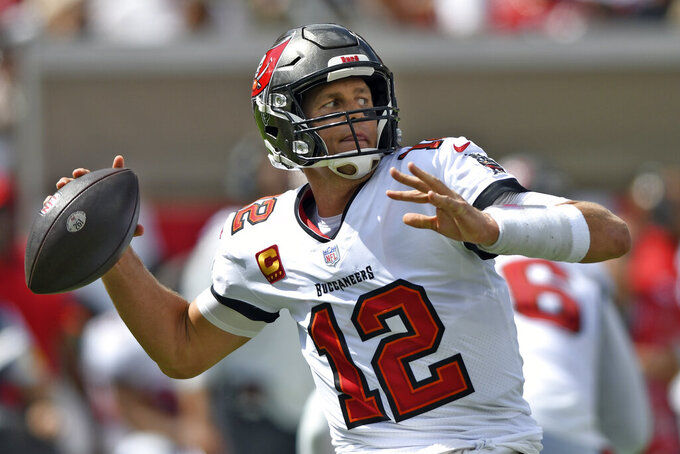 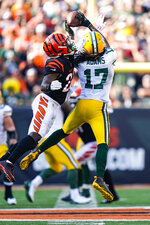 Colts at Ravens, 8:15 p.m. EDT. The Colts (1-3), who played in Baltimore from 1953-83 before their middle-of-the-night move to Indianapolis in March 1984, are coming off their first win of the season. They'll face a tough task in the Ravens (3-1), who can set an NFL record with their 44th consecutive 100-yard rushing game. Baltimore is 16-2 in home prime-time games under coach John Harbaugh.

— Tom Brady, Buccaneers, threw for 411 yards and five touchdowns — the first time in his 22-year NFL career he had more than 400 yards with five TDs in the same game — to lead Tampa Bay to a 45-17 rout of Miami.

— Justin Herbert, Chargers, had 398 yards passing and tied a career high with four touchdown throws, and also ran for a score, in Los Angeles' 47-42 win over Cleveland. It was his 11th 300-yard game, the most by any quarterback in their first two years in the league.

—Josh Allen, Bills, threw three touchdown passes and ran for another score, sending the Buffalo Bills to a 38-20 victory over the Kansas City Chiefs.

— Jameis Winston, Saints, had four touchdown passes, including a Hail Mary on the final play of the first half, to lead New Orleans to a 33-22 victory at Washington.

— Dak Prescott, Cowboys, threw three touchdown passes the day before the one-year anniversary of his severe ankle injury in the same stadium against the same opponent, and Dallas beat the New York Giants 44-20,

— Matt Ryan, Falcons, passed for 342 yards and two touchdowns to lead Atlanta to a 27-20 victory over the New York Jets in the NFL’s return to London.

— Derrick Henry, Titans, ran for 130 yards and three touchdowns to lead Tennessee to a 37-19 win at Jacksonville.

— James Robinson, Jaguars, had a career-high 149 yards and scored a touchdown on 18 carries in Jacksonville's 37-19 loss to Tennessee.

— Nick Chubb, Browns, rushed for 161 yards and a touchdown on 21 carries in Cleveland's 47-42 loss to the Los Angeles Chargers.

— Ezekiel Elliott, Cowboys, finished with 110 yards and a punctuating 13-yard scoring run in the fourth quarter of Dallas' 44-20 win over the New York Giants.

— Rookie Najee Harris, Steelers, rushed for a career-high 122 yards and a TD on 23 carries to help Pittsburgh to a 27-19 win over Denver.

— Davante Adams, Packers, had 11 catches for a career-high 206 yards and a touchdown in Green Bay's 25-22 overtime win at Cincinnati.

— Kyle Pitts, Falcons, had nine receptions for 119 yards and his first NFL TD in Atlanta's 27-20 win over the New York Jets in London.

— Running back Myles Gaskin, Dolphins, caught 10 passes for 74 yards, including touchdown receptions of 1 and 37 yards, in Miami's 45-17 loss at Tampa Bay.

— Dawson Knox, Bills, had 117 yards receiving and a touchdown in Buffalo's 38-20 win over Kansas City.

— Greg Joseph, Vikings, made a 54-yard field goal as time expired to give Minnesota a 19-17 victory over winless Detroit. He finished with four field goals, including a career-best 55-yarder.

— Nick Folk, Patriots, booted a 21-yard field goal with 15 seconds left that lifted New England to a 25-22 win at Houston.

— T.J. Edwards, Eagles, blocked a punt by Carolina that Philadelphia turned into the go-ahead touchdown in a 21-18 victory.

— Kevin Byard, Titans, returned a fumble 30 yards for a score and also had an interception as Tennessee beat Jacksonville 37-19,

— Anthony Brown, Cowboys, returned an interception 45 yards for a score to help seal Dallas' 44-20 win over the New York Giants.

— Everson Griffen, Vikings, had 1 1/2 sacks and a forced fumble in Minnesota's 19-17 victory over Detroit.

Tom Brady threw for 411 yards and five touchdowns in Tampa Bay's 45-17 rout of Miami. It was first time in his 22-year career that Brady threw for more than 400 yards and five TDs in the same game. ... Buccaneers wide receiver Antonio Brown became the fastest NFL player to 900 receptions, doing so in 143 games. Pro Football Hall of Famer Marvin Harrison was the previous fastest at 149. Brown also had two TD catches, joining Julio Jones, Jerry Rice, Torry Holt and Andre Johnson as the only players in league history with 12,000 career receiving yards in fewer than 150 games. The 33-year-old receiver extended the NFL’s longest active streak with at least one catch to 141 consecutive games. ... Atlanta's Matt Ryan completed 33 of 45 passes in a 27-20 win over the New York Jets in London to become the seventh QB to reach 5,000 completions. He also surpassed Eli Manning for the eighth-most yards passing in NFL history. ... Arizona's DeAndre Hopkins had six receptions for 87 yards and one touchdown in the Cardinals’ 17-10 win over San Francisco, At 29 years and 126 days old, Hopkins has 770 career receptions, surpassing Larry Fitzgerald (764) for the most receptions by a player before his 30th birthday.

With a 25-22 victory over Houston and Davis Mills, New England coach Bill Belichick improved to 23-6 in games started by rookie quarterbacks since he took over the Patriots in 2000. ... New Orleans used a 72-yard and 49-yard touchdown pass by Jameis Winston in a 33-22 win over Washington to give the Saints two scoring plays of 45-plus yards for the first time since Dec. 18, 2016, when Drew Brees threw TD passes of 45 and 65 yards to Brandin Cooks. ... New England linebacker Matt Judon had two sacks Sunday to give him 6 1/2 this season, the most in franchise history through five games. He’s also the first Patriots player to have a sack in four games in a row since Jamie Collins and Chase Winovich both did it in 2019. ... Arizona improved to 5-0 — the NFL's lone undefeated team — with a 17-10 win over San Francisco, marking the first time the franchise has had such a start since 1974. ... Dallas' Trevon Diggs had his NFL-leading sixth interception in a 44-20 win over the Giants, giving him at least one in all five games. The only other Dallas player to do that was Don Bishop in 1961.

Green Bay's 25-22 overtime win over Cincinnati made it at least one game that has gone to the extra period in each of the first five weeks of the season. It's only the second time, and first since 2018, that has happened. Also, there have been 18 games with a winning score in the final minute of regulation or in overtime, the most ever at this point of the schedule.

Jacksonville dropped to 0-5 with a 37-19 loss to Tennessee, its 20th consecutive defeat. The Jaguars now have the second-longest skid in NFL history, six shy of tying the record Tampa Bay set in 1977 over its first two seasons as an expansion team. The franchise’s latest debacle came eight days after coach Urban Meyer was captured on camera with a young woman dancing near his lap at an Ohio bar, behavior team owner Shad Khan called “inexcusable.”

Cincinnati's Ja'Marr Chase had six receptions for 159 yards and a touchdown in the Bengals' 25-22 overtime loss to Green Bay, becoming the fifth rookie in NFL history with at least 50 yards receiving in each of his first five career games. He joined Dallas' CeeDee Lamb (2020), Washington's Terry McLaurin (2019), New England's Terry Glenn (1996) and Detroit's Earl McCullouch (1968). Chase is also the third rookie since 1990 with at least five touchdown receptions in his team’s first five games, joining Atlanta's Calvin Ridley (2018) and Minnesota's Randy Moss (1998).

Derrick Henry ran for 130 yards and three touchdowns about 25 miles from where he grew up, leading Tennessee past Jacksonville 37-19. He padded his NFL rushing lead — he has 640 yards on the ground through five games — but ended a streak of three consecutive road games with at least 150 yards rushing. But he became the third Titans/Oilers player in history to top 60 rushing touchdowns, joining Hall of Famer Earl Campbell (73) and Eddie George (64). Henry has 62 total, including 14 against Jacksonville.

Mason Crosby hit a 49-yard field goal in overtime after missing three straight attempts, lifting Green Bay to a wild 25-22 win over Cincinnati. The typically reliable Crosby missed potential winners with 2:12 and then 3 seconds left in regulation, and missed another attempt in overtime before finally winning it. Heading into the game he was 44 of 46 on field goal attempts since the start of the 2019 season. Crosby, who missed an extra-point earlier in the game and also made three field goals, came in having converted all six field-goal attempts and 11 PATs this year. The Bengals’ Evan McPherson also missed on shots that could have won the game, with 26 seconds left in regulation and again in overtime.

The Carolina Panthers are 3-0 with Christian McCaffrey, but 0-2 without him — including a 21-18 loss to Philadelphia. It was difficult to pin the loss on the absence of the 2019 All-Pro as rookie Chuba Hubbard filled in well, rushing for 101 yards on 24 carries — the first 100-yard rushing game of his NFL career.

London hasn’t been kind to rookie quarterbacks. With Zach Wilson and the New York Jets' 27-20 loss to Atlanta, rookie QBs are 0-5 in the English capital since the NFL started staging regular-season games here in 2007. It was the second London game for both teams, but their first at Tottenham Hotspur Stadium. In 2014, the Falcons blew a 21-0 lead to the Detroit Lions, losing 22-21 on Matt Prater’s winning 48-yard field goal at Wembley Stadium. A year later, the Jets beat the Miami Dolphins 27-14 also at Wembley. The NFL will hold another game at Tottenham next Sunday when the Jacksonville Jaguars — with rookie QB Trevor Lawrence — face the Dolphins.

Cincinnati quarterback Joe Burrow was taken to a hospital as a precaution after suffering a bruised throat during a 25-22 overtime loss to Aaron Rodgers and the Green Bay Packers. Burrow, already playing with a surgically repaired left knee, was knocked down hard in the second quarter by defensive end Dean Lowry and stayed on the ground for several minutes before walking off the field. The Bengals punted, but Burrow returned on the next drive and threw a 70-yard touchdown pass to Ja’Marr Chase. ... Giants quarterback Daniel Jones, the sixth pick overall by the Giants in the 2019 draft, was ruled out against the Dallas Cowboys after sustaining a concussion in the first half. The Giants also lost running back Saquon Barkley, who was ruled out after an ankle injury in the first quarter. ... New Orleans’ Taysom Hill suffered a concussion while trying to catch a pass in the second quarter of the Saints’ 33-22 win against Washington and Deonte Harris, who caught a 72-yard scoring pass from Jameis Winston, left with a hamstring injury. ... Washington lost multiple players: wide receiver Curtis Samuel (groin), rookie right tackle Sam Cosmi (left ankle) and cornerback Darryl Roberts (quadriceps). ... Pittsburgh wide receiver JuJu Smith-Schuster went to a hospital with a shoulder injury sustained while getting tackled following a 3-yard gain on an end-around in the second quarter of a 27-19 win against Denver. ... Chiefs running back Clyde Edwards-Helaire left with a left knee injury after getting tackled following a screen pass in the third quarter.

“Both teams tried to lose that game a few times.” — Green Bay quarterback Aaron Rodgers after the Packers edged Cincinnati 25-22 in a game during which the teams' kickers missed a combined five potential winning field goals.

“It was just fourth-and-inches. I went over to Mason and I said, ‘Hey, what do you think?’ I saw the look in his eyes. There was zero flinch from him. If I felt anything different, we were going for it.” — Packers coach Matt LaFleur on Mason Crosby, who made up for three earlier misses by kicking a winning 49-yard field goal in overtime to beat Cincinnati 25-22.