Ngakoue rejoins Jaguars, vows to play even without new deal 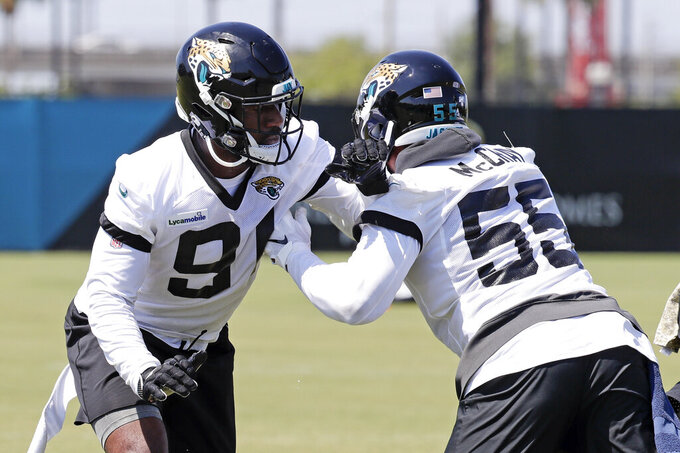 JACKSONVILLE, Fla. (AP) — Yannick Ngakoue grew tired of watching from the sideline as teammates participated in 11-on-11 drills. So he took a different approach to stand out Tuesday.

The Jacksonville Jaguars defensive end ran onto the field during a special teams play, scooped up a punt and started juking would-be tacklers.

Ngakoue is willing to do just about anything to bolster contract negotiations.

The former Maryland standout, a third-round draft pick in 2016, is entering the fourth and final year of a $3.84 million rookie deal. He's due to make $2.025 million this fall — far less than other top playmakers at his position.

He showed up for the first two days of the team's voluntary, offseason conditioning program in April before leaving and spending the past month working out in Miami. Ngakoue rejoined teammates Tuesday and emphatically said he plans to play this season even if he doesn't get a long-term contract.

"Of course, I'm going to play," he said. "I love the game. I'm in God's hands at the end of the day. I've been playing this game my whole life and that's what I'm here to do."

Ngakoue has 29 ½ sacks and 10 forced fumbles in three NFL seasons, developing into a key piece of one of the league's top defenses.

The Jaguars hope to re-sign the 24-year-old Ngakoue, but getting it done might take patience. The team has roughly $13 million in salary cap space for 2019 and could get nearly $10 million more in additional room if linebacker Telvin Smith, who intends to sit out this season , fails to show up for training camp.

They also could rework a high-end contract or two to free up extra cap space.

Although Ngakoue brushed aside several questions about a potentially huge payday, he acknowledged how pass rushers have cashed in this offseason.

"That's not a secret," Ngakoue said. "We all can go on the computer; we see what they're getting. At the end of the day, it's a blessing to be in that position and I'm thankful. If it comes, it comes."

Until then, Ngakoue plans to continue practicing with his team. He said he will be in attendance for the remaining 12 OTAs, wants to be voted a captain this season and hopes to be a mentor to fellow defensive end Josh Allen, the seventh overall pick in the NFL draft who could end up splitting snaps with Ngakoue.

"Just trying to build some team camaraderie, being a leader, trying to be different," Ngakoue said. "That's the main reason why I came back. I don't have to be here, but I chose to be here. Just shows you how much I love the game. That's why I want to be here, to help some guys out.'

"It's always good when you're around your teammates," he said. "Consistency and being around, I think that's part of the chemistry and all the other stuff, so yeah, I'm appreciative of all the players that are here during this voluntary period."