From Nigeria to Buffalo: Efe Obada's hard journey to the NFL 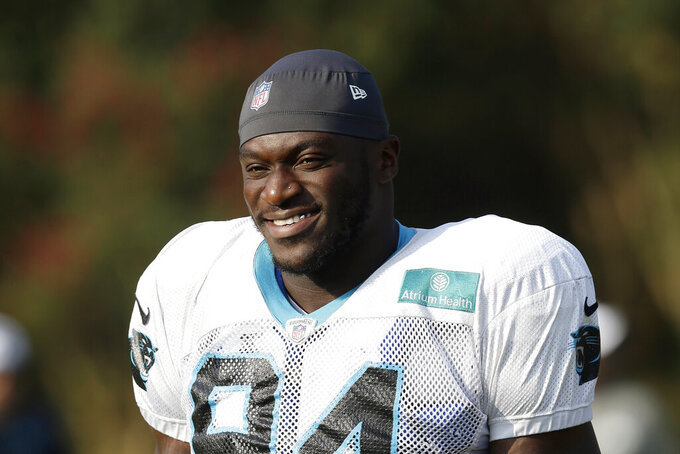 FILE - In this Aug. 13, 2019, file photo, then-Carolina Panthers' Efe Obada (94) takes the field during an NFL football training camp in Spartanburg, S.C. Obada has a beaming smile and quick to crack a joke, such as the one about how he chose an NFL career over taking up UFC because, "I'm too pretty." The Bills defensive end's easy-going approach belies his difficult journey from Nigeria to North America. (AP Photo/Gerry Broome, File)

ORCHARD PARK, N.Y. (AP) — Efe Obada has a beaming smile and is quick to crack a joke, such as when explaining how he choose an NFL career over the UFC.

If only it were that simple for someone who couldn't have envisioned such a choice when he was abandoned at 10 years old, or eight years ago when he worked as a part-time security guard at a specialty foods distributing company in England.

The easy-going approach belies the defensive end's difficult journey from Nigeria to North America. It’s one that involved Obada and his sister falling into the clutches of a human trafficking ring before eventually being shuttled through foster care homes in London, to now, preparing for his fourth NFL season, and first in Buffalo.

Though an advocate for children caught in similar circumstances, Obada prefers not to talk too much of his childhood. At 29, he is focused on making a name for himself for his pass-rushing abilities rather than his past.

And yet, Obada will allow a moment to share how fortunate he feels every morning on his way to training camp and getting his first glimpse of Highmark Stadium on the horizon in Orchard Park, New York.

“Absolutely every day, every single day I drive up here,” Obada said with a hearty laugh. “I’m lucky enough to not be from here so I can appreciate it so much more.”

Listed at 6-foot-6 and and 265 pounds, Obada came to the NFL’s attention playing tight end and defensive end for the London Monarchs — the equivalent of an American semi-pro team. He was first signed to the Dallas Cowboys practice squad and also had brief stints in Atlanta and Kansas City.

Obada got his big break in 2017, when he was assigned to Carolina upon graduating the NFL’s International Pathway Program, which develops select international athletes unfamiliar to football to provide them a shot at making a roster.

Four years later, Obada is coming off a breakthrough season in which he put up career-best numbers with 5 1/2 sacks, four tackles for a loss, forced his first fumble and recovered two more in Carolina.

A free agent in March, Obada signed a one-year contract with Buffalo, where he’s reunited with former Panthers defensive teammates Mario Addison and Star Lotulelei as well as former coordinator Eric Washington, who is in his second season as the Bills defensive line coach.

Obada is counting on the familiarity of rejoining two mentors in Addison and Washington to provide him the best opportunity to win a roster spot behind Addison and Jerry Hughes, and at a retooled pass-rushing position featuring the additions of rookie draft picks Greg Rousseau and Carlos Basham.

“It’s going to be a race to the quarterback, honestly,” Obada said of Buffalo's pass-rushing talent. “I’ve got my work cut out for me.”

Washington saw the potential in Obada when he first arrived in Carolina, and was impressed by how more polished he had become last year.

“I remember the first sack Efe Obada had in a preseason game in 2017. He was so excited, but he was also hungry for the next opportunity,” said Washington, who recommended the Bills sign Obada upon reviewing game tape from last season. “It wasn’t one play. The film that I watched from last year, it was the consistency.”

Addison recalled Obada being a natural at the position.

“I taught him this one move that he kind of perfected. He does it almost better than me,” Addison said. “For a guy not playing football as long as I did, and get out there and do everything I can do, probably can do it better, it shows what kind of tremendous character he has.”

Obada says he's uncomfortable speaking to the media. Yet he’s eloquent explaining his ability to learn quickly, referring to himself as “a blank canvas.” Obada then starts laughing in noting how his wife took the reins in researching where he should sign in free agency.

“Contracts, she was reading it all and all the fine print, doing the research on teams, depth charts, this and that, while I was just relaxing,” Obada said. “She’s the brains. I’m the brawn. I think in your terms, I’d be the jock and she’d be the nerd.”

His thoughts eventually turn to those who didn’t have the benefit of luck or the physical gifts he's enjoyed.

“I’m probably the glitch in the matrix that’s able to be in the NFL,” he said, noting the number of children in his situation who will never get his opportunity.

“Only until I started getting in the NFL, I started realizing that maybe this isn’t normal,” Obada said. “I’m very fortunate and lucky to have this platform to be able to change my life. But we just need to do more, I guess. People need to do more.”