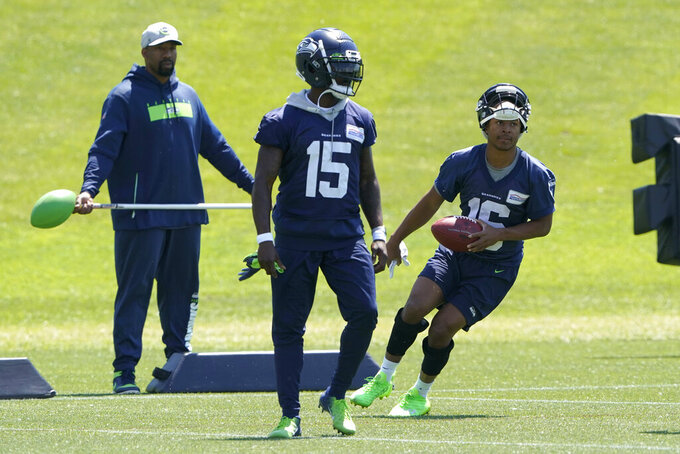 RENTON, Wash. (AP) — Much to his surprise, Tyler Lockett has become the old guy.

Looking around the Seattle Seahawks locker room, the veteran wide receiver is now the longest-tenured member of the roster after the trade of Russell Wilson and release of Bobby Wagner during a tumultuous offseason.

“You made me feel old when you said that,” Lockett said Tuesday after Seattle wrapped up its latest offseason workout. “It’s a lot different since Russ and Bobby is gone. Mentally you feel like you've got to step up. You feel like you've got to fill in the gaps and those voids that’s gonna be missing. But for me, I just try to continue to be myself. I don’t try to put extra pressure on myself.”

There’s a lot new in Seattle, including Lockett’s standing in the locker room. He’s the only player remaining from the Seahawks’ 2015 draft class and just one of two players acquired by Seattle before 2018. Long snapper Tyler Ott is the other after he joined the Seahawks in 2017.

But all the new is refreshing in a way for Lockett, who has been Seattle’s leader in either receptions or yards receiving each of the past four seasons. Even if that means making a massive adjustment getting use to life without Wilson.

"This is where you test limits.”

Lockett caught a lot of passes over the years from Wilson and is coming off three straight seasons with at least 1,000 yards receiving. Even last year when Wilson missed a month due to a finger injury, Lockett still managed 73 catches for 1,175 yards and eight touchdowns.

But that was the past and the biggest question surrounding the Seahawks is who Lockett will be catching passes from this season with Geno Smith and Drew Lock the likely candidates to be Wilson's replacement.

Lockett said he has been impressed with Lock so far coming over from Denver and picking up Seattle’s offensive system. He’s also noticed a different demeanor from Smith during the offseason program knowing that with Wilson no longer around he has the chance to win a starting job for the first time since the beginning of his career with the New York Jets.

Since becoming a pro, Lockett hasn’t seen a quarterback competition play out through the offseason. He said the last one he can remember came in high school.

“It’s something new, but it’s something that’s very interesting just to be able to see when it comes to that competitive nature, two people, three people being able to compete for a spot,” Lockett said. “We saw it when I first got here at receiver. We had lots of talent, loads of talent at receiver. And loads of talent at (defensive back). There was people at DB that didn’t make the team and I was shocked, when I was a rookie. And it’s just that competitive nature that takes you to different places.”

By Dave Campbell 54 minutes ago
By Maryclaire Dale 2 hrs ago
By John Wawrow 3 hrs ago
By W.g. Ramirez 7 hrs ago
By Noah Trister 14 hrs ago