Out of Miller's shadow, Barrett aims to follow his footsteps 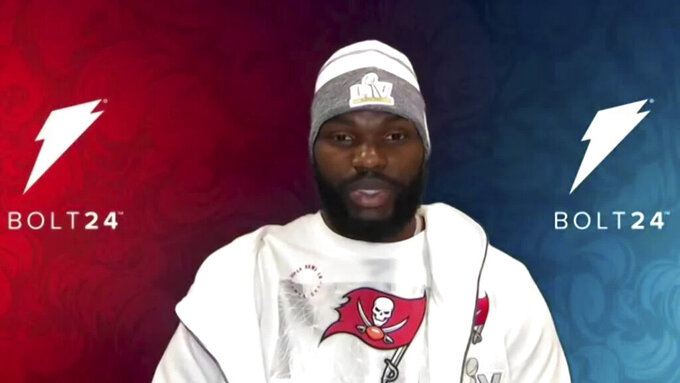 In this still image from video provided by the NFL, Tampa Bay Buccaneers outside linebacker Shaquil Barrett (58) speaks during Opening Night for the NFL Super Bowl 55 football game Monday, Feb. 1, 2021. (NFL via AP)

Barrett recalls Miller gathering his fellow Denver Broncos pass rushers at the team hotel on the eve of Super Bowl 50 in Santa Clara, California, and telling them the championship was theirs for the taking if they could just get to the Carolina quarterback.

Miller knocked both the football and the Lombardi Trophy from Newton’s grasp with a pair of strip-sacks in the Broncos’ 24-10 victory the next night.

“He was determined to get it by any means, wouldn’t let failure be an option,” Barrett recounted. “And that’s what I’m on right now. We came too close to start next year without a ring. So, we’ve got to work for it this week, keep everyone ... with high energy and then just execute.”

Barrett played 49 snaps in Super Bowl 50, about half on special teams, the other half spelling Miller and DeMarcus Ware.

Barrett will have a starting — and maybe starring — role in Super Bowl 55 when the Buccaneers (14-5) face Mahomes and the reigning champion Kansas City Chiefs (16-2) Sunday at Raymond James Stadium.

Barrett and Jason Pierre-Paul, who won a ring with the New York Giants nine years ago, are the bookends on the Bucs’ pesky defense, veteran outside linebackers who meshed into a quarterback’s nightmare in Tampa with 50½ combined sacks in their two seasons together.

That includes five takedowns of Aaron Rodgers in the NFC championship game at Lambeau Field where Pierre-Paul had his first career multi-sack playoff game and Barrett joined Hall of Famer Warren Sapp as the only Bucs with three sacks in a playoff game.

The influences of Miller’s speed and Ware’s handwork shine through Barrett’s play.

“He’s got quite an arsenal,” Tampa Bay defensive coordinator Todd Bowles said. “He can go power, he can go speed and he can beat you with technique."

Sometimes all three at once.

Barrett readily admits he gleaned the best parts of his game from the men whom he backed up in Denver after starting out as an undrafted rookie on the practice squad out of Colorado State, but who quickly made a name for himself in an unparalleled pass rush rotation that also included Shane Ray.

“I do have some of that DNA in me,” Barrett said. “I learned a lot from those guys in Denver and it just helped shape me into the pass rusher I am today.”

Barrett shared starts with Ray opposite Miller following Ware’s retirement in 2016. But John Elway’s fateful selection of Bradley Chubb instead of Josh Allen with the fifth overall pick in the 2018 draft meant Barrett’s days in Denver were numbered.

He hit free agency in 2019 determined to find a starting job and long-term security, and Cincinnati offered both before pulling a two-year offer, citing a shoulder injury that Barrett called nonexistent.

In stepped the Bucs, who offered him a one-year, prove-it deal worth $5 million, which represented some $53,000 more than he’d earned in four seasons in Denver.

Barrett had a monster debut in Tampa, collecting an NFL-best 19½ sacks, forcing six fumbles and earning his first Pro Bowl nod in 2019. He parlayed that breakout season into the $15.88 million franchise tag he played on in 2020, when he had eight sacks in the regular season as the Bucs ended a 13-year playoff drought.

Set to become a free agent again this spring, Barrett trusts he’ll be signing a long-term deal to stay in Tampa and finally build his dream house after renting for two years.

“We’re just excited to be able to start laying roots,” he said.

Barrett can further establish his bona fides with a big game Sunday.

Mahomes remembers Barrett in Denver as a player who never let quarterbacks exhale whenever Miller or Chubb tapped out for a breather.

“You could see how much talent he had even though he was backing up those guys,” said Mahomes, who called Barrett “right up there at the top” of the league’s elite pass rushers.

“Last time we played them he strip-sacked me. So, I have to know where he’s at on each and every play.”

“He’s a heck of a player. He’s a very smart football player. He’s got great speed, he’s got great power, he’s got a ton of moves,” Remmers said. “You’re never quite sure what he’s going to do and he makes plays, that’s the main thing. He’s definitely going to be a challenge for us up front and I can’t wait to go out there and play him on Sunday.”

For Barrett, watching Remmers on film brings back more memories of Miller and his pregame advice to seize the moment.

“And that’s the plan," Barrett said. "Just come in all energy, all effort and get the job done.”