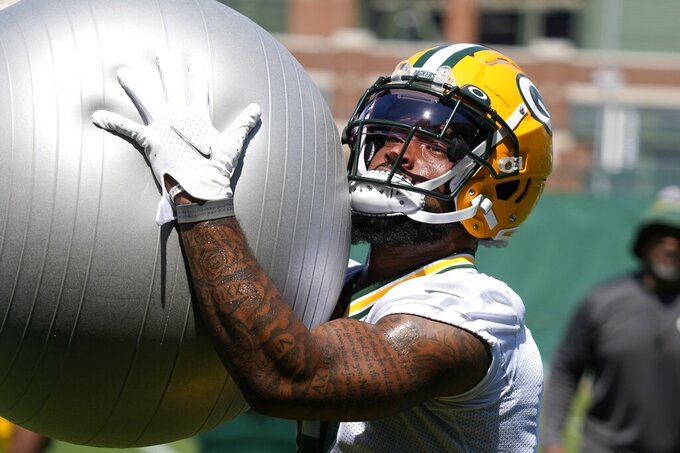 FILE - In this Tuesday, June 8, 2021, file photo, Green Bay Packers' Amari Rodgers runs a drill during an NFL football minicamp in Green Bay, Wis. Rookie receiver Rodgers grew up admiring Randall Cobb and eventually learning from him, but he never believed having his mentor as a teammate was a realistic possibility. Yet that’s exactly what’s happened. Rodgers called the situation a dream come true on multiple occasions while chatting with reporters Saturday, July 31, 2021. (AP Photo/Morry Gash, File)

GREEN BAY, Wis. (AP) — Green Bay Packers rookie receiver Amari Rodgers grew up admiring Randall Cobb and eventually learning from him, but he never believed his mentor would ever become his NFL teammate.

Yet, that’s exactly what happened when the Packers acquired Cobb from the Houston Texans for an undisclosed draft pick at the start of training camp.

“Throughout my whole career since I switched to receiver, I’ve been reaching out to him getting advice,” said Rodgers, a third-round draft pick. “Now I’ll be able to get it from him every single day. I just know it’s going to enhance my game even more.”

Cobb and Rodgers are nine years apart in age but have similar backgrounds.

Rodgers grew up in Knoxville, Tennessee, and is the son of Tee Martin, the quarterback of Tennessee’s 1998 national championship team and the current Baltimore Ravens receivers coach. Cobb is from Alcoa, Tennessee, about 12 miles from Knoxville.

When Cobb played college football at Kentucky, Martin was his position coach. Rodgers would perform practice drills for his dad and eventually started getting instruction from Cobb as well.

“I thought I was working out with LeBron (James) because he was the best athlete that I’d seen at that moment in our group,” Rodgers said.

Cobb was equally impressed by the extraordinary work ethic Rodgers displayed as a 12- and 13-year-old. It was the same tenacity that would help Rodgers during his own college career as he returned to action for Clemson less than six months after undergoing surgery for a torn anterior cruciate ligament.

“Name me a kid that you know that’s on a college practice field doing ladder drills, going through receiver workouts with his dad,” Cobb said. “It’s not many that I can name. And not like mad about it and huffing, puffing, but wanting more, like finishing and wanting to do more. That’s just the type of kid he is.”

Rodgers says he developed those work habits out of a desire to make a name for himself.

Back home in Knoxville, he’d always been known as Tee Martin’s kid. He wanted to build his own legacy.

“I always had a chip on my shoulder to prove everybody that I am the player that everybody expects me to be,” Rodgers said. “Every single week I step out on the field trying to prove that I am Amari Rodgers and I’m not just Tee Martin’s son.”

After spending 2019 with Dallas and 2020 with Houston, Cobb is back in Green Bay and teaming up with his protégé, to Rodgers’ surprise.

In some respects, Cobb’s return could seem a bit inconvenient for a rookie seeking a role on a contending team.

When Green Bay drafted Rodgers, he was billed as a guy who could mature into the Packers’ best slot receiver since Cobb. Now they’re on the same team, playing the same position and potentially competing for playing time.

Yet Rodgers takes issue with the notion that it could hinder his development.

Cobb already has been offering advice to Rodgers for the last several years. He’s ready to continue that relationship now that the mentor and pupil are teammates.

“I hope that I can be what Greg Jennings and Donald Driver and those guys were for me,” Cobb said. “That’s the approach that I’ve taken. I walked in here, I’m going to give him every tool that was given to me, and we’ll see what happens with him.”

NOTE: The Packers placed guard Simon Stepaniak on the reserve/retired list. Stepaniak, a 2020 sixth-round pick from Indiana, never played last season due to injury. He tore an anterior cruciate ligament during a practice before the Gator Bowl at the end of the 2019 season.