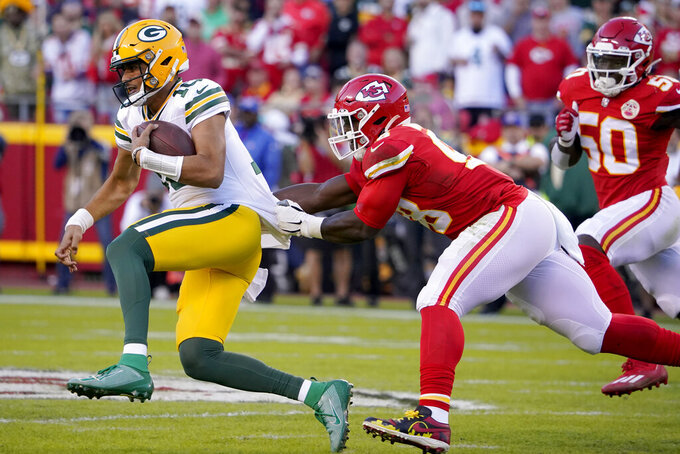 KANSAS CITY, Mo. (AP) — The Green Bay Packers did all they could defensively to help out Jordan Love in his first career start.

Too bad for Love their special teams weren't on board.

In fact, the Packers were so bad on kicks and punts in a 13-7 loss to the Chiefs on Sunday it almost seemed as if they were trying to sabotage the backup quarterback, who was forced to start when Aaron Rodgers tested positive for COVID-19 this week.

There was the 40-yard field-goal attempt that Mason Crosby, their erstwhile sure-footed kicker, missed late in the first quarter that would have made it a 7-3 game. And the 37-yard attempt by Crosby that Chiefs defensive end Alex Okafor swatted away early in the second quarter as Kansas City took a 13-0 lead into the break.

There was the punt that bounced off downfield blocker Malik Taylor, which Kansas City recovered and turned into an easy field goal, and another punt early in the third quarter that Amari Rodgers muffed but was fortunate to recover himself.

Aaron Rodgers would have struggled just as much as Love to overcome that mess.

“I mean, obviously we could have used those six points,” Packers coach Matt LaFleur said afterward, “and we basically gave them points when we fumbled the ball. You can't have that happen.”

Indeed, the two missed field goals proved to be the difference in the final score.

Not that Love did much to make Green Bay brass feel good about spending a first-round pick on him last year.

He was 19 of 34 for 190 yards with a touchdown in the closing minutes, which at least gave Green Bay (7-2) a chance to keep its seven-game winning streak alive. But he also threw an interception near the Kansas City goal line a few minutes earlier, another mistake that cost the Packers a chance to escape Arrowhead Stadium with a win.

“I mean, what it comes down to is making plays,” said Love, the Packers' first-round pick in the 2020 draft, who had thrown just seven regular-season passes before Sunday. “I think if we would have been able to hit one of the plays against their all-out blitz, you wouldn't have seen it as much. That's all it takes is the one play. But I didn't do enough.”

That doesn't mean Love doesn't think he can the next time.

Asked whether he thinks he's ready to be a full-time NFL quarterback, Love replied: “Yes, I do.”

Still, the performance puts the Packers in quite a predicament.

Rodgers did little to endear himself to the organization, its fans and the rest of the league this week when it came out that he was unvaccinated — despite claiming to be “immunized” against COVID-19 earlier in the year. And his loose adherence to NFL rules for unvaccinated players means there could be additional punishment coming down the line.

His future in Green Bay beyond this season already was murky after he nearly departed this past offseason.

More immediately, there's the fact that Rodgers must test negative to return by Saturday at the earliest. That means a tight window for him to play against Seattle next week; otherwise, Love would get his second career start.

“Jordan will get the reps and we’ll see where we're at,” LaFleur said. “(Rodgers) is our starting quarterback. It's just, I think he's gone through enough. Yeah, you like guys to practice all week long but I don't think it's absolutely imperative to do that. We just have to make sure he's well in tune with our plan.”

At least the Packers' defense did what it could against Kansas City to help Love out on Sunday.

They held Patrick Mahomes to 20-of-37 passing for 166 yards — the fewest in a complete game in his career — and the high-flying Chiefs offense to 237 yards in all. They stuffed them on fourth-and-1 in the first half, held on third-and-goal at the Green Bay 4 to force a field goal later and forced a punt on third-and-1 late in the third quarter.

It was the kind of performance that — at least with Rodgers under center — is usually enough.

“Any time you can hold an offense that explosive to 13 points, I think you had a great night,” Packers running back Aaron Jones said. “Most of the time we should win the the game when we hold a team to 13 points.”