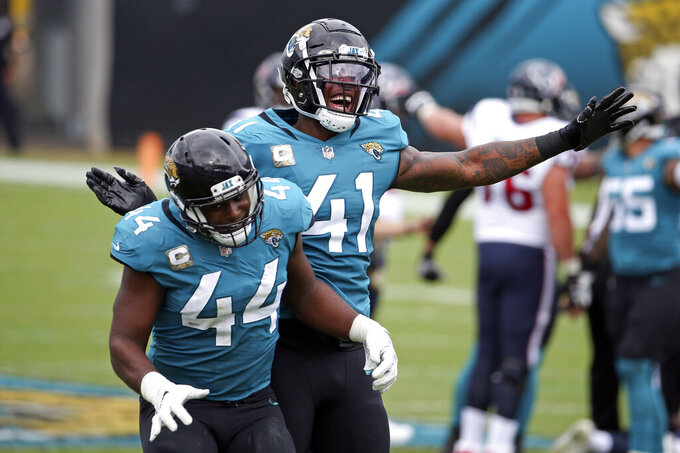 Jacksonville Jaguars linebacker Myles Jack (44) and linebacker Josh Allen (41) celebrate after the Jaguars recovered a Houston Texans fumble during the first half of an NFL football game, Sunday, Nov. 8, 2020, in Jacksonville, Fla. (AP Photo/Stephen B. Morton)

The Green Bay Packers are getting healthier and guarding against complacency before opening the second half of their season Sunday as two-touchdown favorites over the slumping Jacksonville Jaguars.

Green Bay (6-2) has withstood a series of injuries to lead the NFC North at the midway point of the season. Running back Aaron Jones (calf) came back last week after missing two games and Pro Bowl offensive tackle David Bakhtiari (chest) has practiced fully this week after sitting out three games.

The Packers share the NFC’s best record with New Orleans and Seattle.

“To be 6-2 right now with the injuries that we’ve had and the circumstances feels really good,” quarterback Aaron Rodgers said. “We’re not going to relax or get complacent though. We’ve got a tough road ahead of us and some big dreams down the line.”

The Packers learned that lesson in their previous home game, as they fell 28-22 to a Minnesota Vikings team that had entered Lambeau Field with a 1-5 record. Rodgers said afterward that the Packers didn’t have the necessary energy for that game.

Jacksonville (1-7) is struggling even more than that Minnesota team was a couple of weeks ago.

The Jaguars are 13 1/2-point underdogs and have dropped seven straight games since opening the season with a 27-20 victory over the Indianapolis Colts. They’re allowing 418.1 yards per game, 6.4 yards per play and 30.9 points per game to rank 31st out of 32 NFL teams in each of those three categories.

“Obviously the statistics are poor,” Jaguars coach Doug Marrone said. “That’s why we’re sitting where we are right now. We’re just going to keep trying to get those guys better.”

On offense, the Jaguars have benefited from an infusion of rookies.

James Robinson, an undrafted free agent from Illinois State, has rushed for 580 yards and has 27 catches for 225 yards. Laviska Shenault Jr., a second-round pick from Colorado, has 30 catches for 323 yards. Jake Luton, a sixth-round selection from Oregon State, made his first career start last week and threw for 304 yards with one touchdown pass and one touchdown run.

Luton says it will be “pretty surreal” matching up with Rodgers and called the two-time MVP “a wizard with the football in a lot of ways.” He will face a Green Bay secondary that could be missing star cornerback Jaire Alexander, who left the Packers’ 34-17 victory at San Francisco last week to get evaluated for a concussion.

“It’s somewhere I’ve dreamed of playing,” Luton said. “Lambeau Field is pretty historic, pretty awesome. It’d be real cool if it was rocking, a lot of people cheering against you. So, it’ll be a little different with it being empty, but I’m sure it’ll still be awesome.”

Jaguars kicker Chase McLaughlin flew from Minneapolis to Jacksonville this week, only to end up back in the Midwest.

The Jaguars signed McLaughlin off Minnesota’s practice squad Tuesday and expect him to play in Green Bay after traveling nearly 3,000 miles and not getting to practice. McLaughlin has to spend several days going through COVID-19 protocols before joining teammates for a walkthrough Saturday.

Green Bay’s Davante Adams is off to the fastest start of his career. Even though he missed two games with a hamstring injury, Adams is tied for second among all NFL players with eight touchdown catches, one behind Kansas City’s Tyreek Hill.

This game marks a homecoming of sorts for Jacksonville linebacker Joe Schobert, the Jaguars’ leading tackler.

Schobert is from Waukesha, Wisconsin, about 130 miles south of Green Bay. He began his college career as a walk-on at Wisconsin before earning Associated Press All-America second-team honors in 2015, his final year with the Badgers.

Green Bay’s roster includes a few people with ties to the Jaguars franchise.

Tight end Marcedes Lewis was drafted by the Jaguars in the first round in 2006 and played for Jacksonville through 2017.