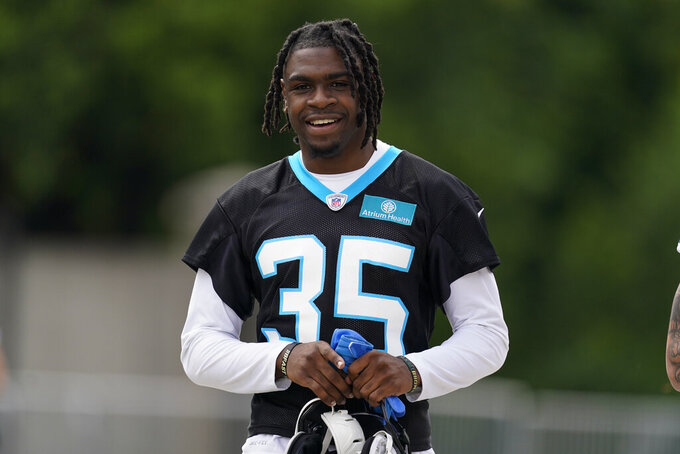 The biggest question facing the Carolina Panthers rookie cornerback is whether his elite speed translates to a successful NFL career.

Barnes ran a 4.23 40-yard dash at the NFL scouting combine in February — the fastest time ever recorded by a defensive back since the NFL Network began broadcasting the event in 2003. It’s also the second-fastest time overall, one one-hundredth of a second behind wide receiver John Ross, who set the combine record (4.22) in 2017.

Of course, speed doesn't always equate to a long career at the NFL level.

Barnes, being a seventh-round pick, still has some technique issues to work out as a cornerback and will likely have to carve out a niche as a special teams player before becoming a full-time defender.

But don't confuse him with being another raw track athlete trying to make it as a football player. He's been playing football since he was 5 and was a four-star recruit as a wide receiver coming out of high school.

“Football is his first love,” said Panthers coach Matt Rhule. "... He is a football kid that happens to be really fast.”

Barnes, a two-time Texas state champion in high school in the 100 and 200 meters, once turned down a six-figure deal to run professional track so he could play for Rhule's Baylor Bears on a football scholarship.

His goal has always been to play football, not be a sprinter.

"My daddy went through the same process and he was like, ‘Why would you take that (track) deal when you can get paid on a yearly basis playing football? Track you just get that one deal,’ ” Barnes said.

It's no given that Barnes will make the Panthers' 53-man roster, as they're crowded depth chart at cornerback includes former first-round draft picks Jaycee Horn and C.J. Henderson and second-round pick Donte Jackson. The team is also high on Keith Taylor, who stood out as a rookie last season.

But Barnes does have one advantage on his side that other late-round draft picks might not — he played one season for Rhule, who recognizes his potential.

Barnes went to Baylor as a wide receiver but moved to cornerback after the Bears suffered injuries in the secondary. He wound up starting 10 games at cornerback last season, recording 23 tackles, five pass breakups, an interception, and a fumble recovery.

Rhule said Barnes has a “football mentality." He remembers him getting beat on a double move against a Big 12 opponent, then regathering himself and using his “unique catch-up speed” to race down the wide receiver and break up a deep ball. He also remembers his toughness, once playing through a broken finger and him running a 10.4 in the 100 meters in a track meet just hours after going through a full-contact football practice.

Nicknamed “Boogie” by his parents because he liked to dance as a young boy, Barnes still has to “clean up some technical things” on defense, according to Rhule.

“We are really deep in the secondary," Rhule said. "There will be a lot of great battles there. He is going to have to use his speed and physicality on special teams.”