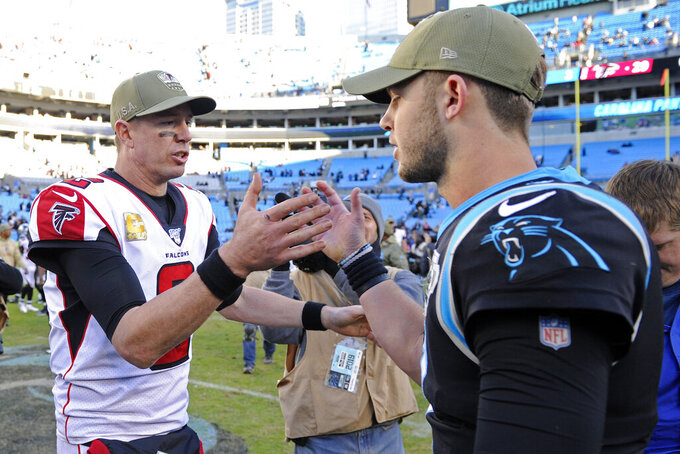 CHARLOTTE, N.C. (AP) — The Kyle Allen bandwagon is beginning to empty in Carolina.

The Panthers’ second-year quarterback who started his NFL career with five straight victories has suddenly stumbled upon tough times, losing three of his past four starts while throwing nine interceptions during that span.

On Sunday, he had his worst performance yet, throwing a career-high four picks while taking five sacks in a 29-3 loss to the Atlanta Falcons at home.

But with Cam Newton on injured reserve, the Panthers (5-5) are stuck with Allen the rest of the way — and coach Ron Rivera said he’s willing to stick with him, knowing there will be a lot of growing pains in the second half of this season.

“I’m not concerned about Kyle’s learning curve,” Rivera said. “... He’s a young quarterback who is going to make young mistakes. But that is why you put him out there. We’re going to live with his learning pains because that is what the game is all about.”

But first, he said, Allen needs to learn that he can’t do it alone and has to rely more on his teammates. Twice Allen forced throws into coverage deep in Atlanta territory, leading to a pair of interceptions.

Allen said his performance boiled down to “poor decision-making.”

“Three interceptions in the first half put us in a horrible position,” Allen said. “I think it’s just poor decision-making. I’ve talked about this before. Turnovers are not going to give us any chance to win. My decision-making has to get better.”

Allen said for him that means spending more time in the film room and simply playing more.

This was only his ninth NFL start, so he’s still young.

And maybe Allen was a victim of his early success.

He spoiled Carolina fans by going four games without an interception this season — although he did turn the ball over on five fumbles. But in the past four games Allen has thrown nine interceptions, meaning he has 14 turnovers and 10 touchdown passes on the season.

The same fans that were calling for the Panthers to cut or trade Newton after the season and save $19 million under the 2020 salary cap are probably now wondering how quickly the franchise’s all-time leading passer might recover from a foot injury that ended his season.

That’s because the jury is still very much out on Allen and whether he can be the team’s quarterback of the future.

Carolina drafted Will Grier in the third round, but the team isn’t sure if he’s ready to play yet.

“We are not winning these games because the turnover differential is not in our favor the last four games or so,” Allen said. I’m not putting the team in position to win.”

But Olsen quickly added that the entire offense shares blame, calling the game a “comedy of terrible football.”

“Obviously we all had our fair share of moments,” Olsen said. “When you have a game like that offensively, when you score three points, any guy who stepped on the field offensively shares the blame. Quarterbacks are always the focal point, and that’s just the way the league is, but anybody who played offense for us today did a bad job.”

McCaffrey continues to be a bright spot for the Panthers, racking up 191 yards from scrimmage. He would easily eclipsed 200 yards had several plays called back because of holding penalties.

Rivera said Allen could certainly use some help — and he pointed directly at the team’s offensive line, which has started a rookie at left tackle for most of the season. First it was Dennis Daley. On Sunday, it was Greg Little in the starting lineup.

“We have to be able to protect him and it was unfortunate we didn’t protect the quarterback the way we are capable of,” Rivera said. “We have too many good football players who have to do a better job.”

Things won’t get easier for Allen

Next Sunday he makes a trip to one of the loudest stadiums in the NFL — the Louisiana Superdome — to face the division-leading Saints.

“Learn from this,” Allen said. “Just have to go back and look at the film and understand exactly what happened and try not to repeat the mistakes.”