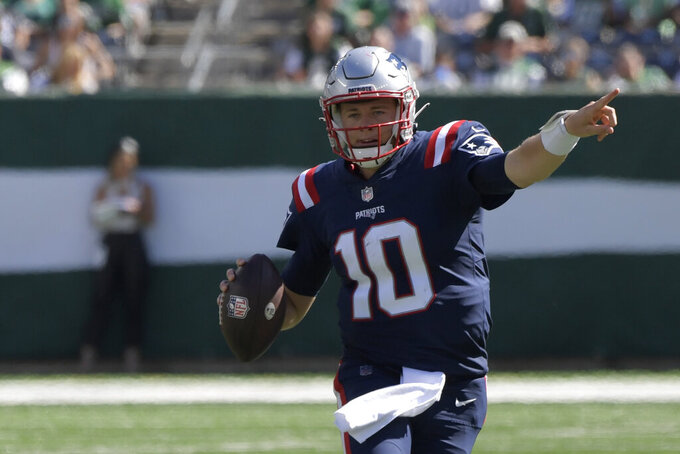 OPENING LINE: Patriots by 3, according to FanDuel SportsBook.

TURNOVER DIFFERENTIAL: Saints plus-2; Patriots plus-3.

SAINTS PLAYER TO WATCH: Versatile fifth-year RB Alvin Kamara is among the most productive players in Saints history and will be looking to bounce back from a quiet Week 2. He led the NFL last season with 21 total TDs and has one score through two games this season. That came in a Week 1 victory over Green Bay, when he had 91 total yards from scrimmage.

PATRIOTS PLAYER TO WATCH: CB J.C. Jackson. He is coming off his third career game with two interceptions. He is tied with Miami’s Xavien Howard for the most INTs in the NFL over the past two seasons.

KEY INJURIES: Saints starting center Erik McCoy (calf) hasn’t played since going down in the first quarter of the season opener. Starting defensive backs Marshon Lattimore (hand) and C.J. Gardner-Johnson (knee) both began practicing again this week after sitting out last Sunday at Carolina. … Patriots LB Matt Judon sat out the first practice of the week with a knee issue. RT Trent Brown began the week limited with the calf injury that caused him to sit out in Week 2 against the Jets. RB Damien Harris also started the week limited with a finger issue.

SERIES NOTES: The Patriots have won two straight and five of the last six meetings. … Eight of the 13 games in the series have been decided by a touchdown or less — including two by a field goal. The Saints have a 3-4 record in Foxborough and have dropped the last three games there.

STATS AND STUFF: Patriots coach Bill Belichick is 5-1 against the Saints. New Orleans’ Sean Payton is 1-2 against New England. … The Saints and Patriots are two of the highest-scoring teams since 2010 and the only teams to reach 5,000 points scored over that time. … Saints DE Payton Turner, the club’s first-round draft pick, had five tackles, one sack, three stops for a loss and one quarterback hit in his NFL debut. ... New Orleans offensive coordinator Pete Carmichael was a high school football and baseball player at Medway, Massashusetts and also played baseball for Boston College, where he was a four-year letterman and team captain in 1994. ... New Orleans WR Chris Hogan played for New England from 2016-18. ... WR/RS Deonte Harris played at Assumption College in Worcester, Massachusetts. … Special Teams coordinator Darren Rizzi played at the University of Rhode Island from 1989-91. ... Saints CB Desmond Trufant and Patriots CB Justin Bethel were teammates in the same Atlanta secondary in 2019. ... In 2020, the Saints finished the regular season tied for third in the NFL in takeaway/giveaway margin at plus-9 and through the first two games of 2021 are tied for fourth at plus-2. ... Payton’s 153 career wins (regular season and postseason combined) since 2006 rank fourth among active head coaches. ... Since entering the NFL in 2015, Winston is second in yards passing per completion (12.6). ... Since entering the NFL in 2017, Kamara ranks second in total scrimmage yards (6,285) behind Ezekiel Elliott (6,483). ... Kamara’s 21 total TDs scored in 2020 led the NFL and set a Saints season record. He has one TD through two games this season. ... Winston had his 11th-career TD rushing in Week 2. While with Tampa Bay, he passed for 334 yards and a TD in winning his only career game vs. New England on Oct. 5, 2017. ... Saints TE Juwan Johnson is one of three TEs, along with Tampa Bay’s Rob Gronkowski and Kansas City’s Travis Kelce, with at least two TDs receiving this season. ... CB Bradley Roby had a sack last week in his Saints debut. He has five pass breakups, two interceptions and a forced fumble in six career games vs. NE. … Patriots QB Mac Jones leads all rookies with a 96.7 passer rating and 73.9 completion percentage. He also ranks second with 467 passing yards. … RB James White leads all active RBs in receiving yards (3,278) and receiving TDs (25). He also ranks second in catches (381). … Damien Harris had his first rushing TD of the season last week. He’s rushed for 100 or more yards in two of his past three home games. … TE Jonnu Smith had 63 receiving yards and a TD in his only career game against New Orleans in 2019 when he was with the Titans. … LB Josh Uche had a career-high two sacks last week.

FANTASY TIP: While Winston had some success in his last outing against New England, this may not be a good week to have him in your lineup. He was just 11 of 22 for 111 yards with two interceptions and no touchdowns against the Panthers’ top-ranked defense last week. The Patriots have the NFL’s sixth-ranked passing defense, which includes a secondary coming off a four INT game against the Jets.