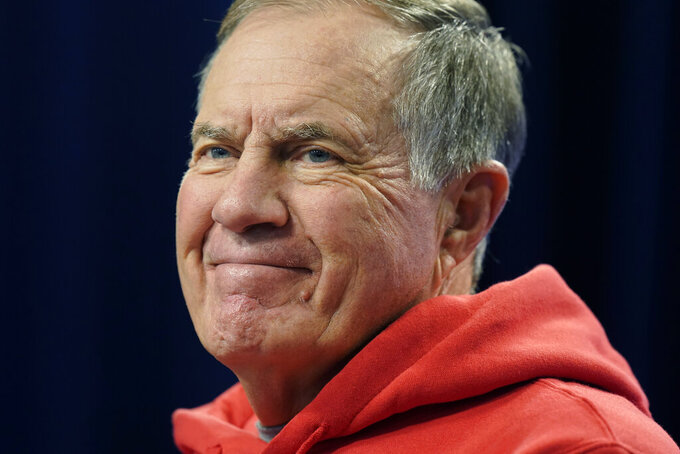 OPENING LINE: Ravens by 3, according to FanDuel SportsBook.

TURNOVER DIFFERENTIAL: Ravens plus-3; Patriots minus-2.

RAVENS PLAYER TO WATCH: QB Lamar Jackson. It’s early, but Jackson is resembling the player that won league MVP honors in 2019. He’s looking for his third game in a row with three or more passing touchdowns. He has five TDs (three passing, two rushing) and only one INT for a 102.4 passer rating in two career starts vs. New England.

PATRIOTS PLAYER TO WATCH: QB Mac Jones. He completed 21 of 35 passes for 252 yards and a TD last week to help the Patriots notch their first victory. He’s also fared well at home, where he had 16 TD passes in nine home starts last season.

KEY MATCHUP: Patriots pass rush vs. Ravens offensive line. Baltimore’s protection around Jackson is missing some key components with tackle Ja’Waun James out for the season because of an Achilles tendon injury and 2019 All-Pro left tackle Ronnie Stanley (ankle) yet to play. Look for New England to send pressure at Jackson via linebacker Matt Judon, a former Raven, who already has two sacks this season.

SERIES NOTES: The Patriots have won three of the past four meetings with the Ravens, including the rain-soaked matchup in 2020. ... New England has a 9-2 edge in the regular-season matchups, including a 6-0 record in Foxborough. ... All four postseason meetings have been played in New England, with each team winning two. The Patriots’ victories include a 23-20 AFC championship game win during the 2011 season. ... Ravens coach John Harbaugh is 4-7 (including playoffs) vs. New England. ... Patriots coach Bill Belichick is 9-4 (including playoffs) vs. the Ravens.

STATS AND STUFF: Ravens TE Mark Andrews had a team-high nine catches for 104 yards and a TD in Week 2. He is looking for his 12th game in a row with 50 or more receiving yards. He had seven catches for 61 yards in the previous meeting with New England. ... S Marcus Williams had 10 tackles and tied a career high with two INTs in Week 2. He is one of two players in the NFL (Minkah Fitzpatrick) with an INT in each of the first two weeks. ... New England has the third-best record (17-3) in home openers since 2002, trailing only Denver and Seattle (both 18-3). ... The Patriots have been outscored 34-24 through two games. ... With an appearance Sunday, special teams captain Matt Slater will have appeared in 103 games at Gillette Stadium, breaking a tie with Stephen Gostkowski for the second-most games played at the stadium as a member of the Patriots. Tom Brady (134) is first. ... RB Damien Harris needs two rushing TDs to become the 14th Patriots player to reach 20 career TDs. ... WR DeVante Parker had 75 receiving yards in his previous game vs. Baltimore (Sept. 8, 2019, while with Miami). He has a TD catch in two of three career games against the Ravens. ... DB Devin McCourty’s 31 INTs is tied with Baltimore’s Marcus Peters for the most among active players. McCourty, Peters and Minnesota’s Harrison Smith are the only active players with at least 30.

FANTASY TIP: It could be another big week for Jackson, who has five TDs (three passing, two rushing) and one INT for a 102.4 passer rating in two career starts vs. the Patriots. He also has two or more TD passes in five of his past six starts against AFC East foes.