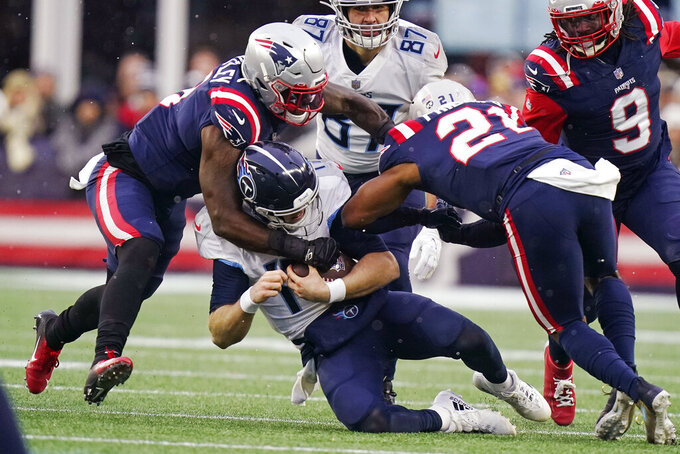 FOXBOROUGH, Mass. (AP) — Adrian Phillips was thinking the worst as he was lying on his back, his right knee being attended to by the training staff in the closing minutes of the Patriots’ Week 13 win at Buffalo.

The safety had just made one of the plays of the game, knocking away a third-down pass attempt into the end zone by Bills quarterback Josh Allen. It set up a fourth-down pass that was also batted down by teammate Myles Bryant to seal a 14-10 win that kept the Patriots atop the AFC East.

It turns out both Phillips and the Patriots were able to take a sigh of relief during their Week 14 bye.

“Everything checked out pretty well,” Phillips said Tuesday. “At the time, I was like I didn’t want to get hurt or anything like that. You don’t know how severe the injury is or whatever it may be. But we’ll just take it day by day working with the training staff and go on from there.”

It’s positive news for the Patriots as they prepare for this week’s road matchup at Indianapolis and look to keep their seven-game win streak going.

Phillips and running back Damien Harris (hamstring) were on the field at the start of the Patriots’ first practice of the week Tuesday. Harris was moving well after he left the Buffalo game just before halftime after appearing to tweak his hamstring in the second quarter. He returned to the game and then pulled up on his first carry of the second half.

New England enters the week with the NFL’s third-ranked defense, allowing just 310 yards per game. It also is giving up a league-low 15.4 points per game.

Phillips has been a big part of that. His four interceptions are second on the team behind J.C. Jackson (seven) and his 58 tackles rank third.

He’ll be needed to try to slow down a Colts offense that put up 41 points in a win over the Bills in Week 11, led by NFL leading rusher Jonathan Taylor’s 185 rushing yards and four touchdowns.

“He's a home run hitter and he’s a guy who’s not afraid of contact,” Phillips said. “You can see as the game keeps going, he gets more physical. People don’t want to hit that when it comes to the third and fourth quarter, especially when they have a lead and he’s in his zone. ... If he knows you don’t want to hit him, it’s going to be a long day for you.”

New England’s defense has allowed only two 100-yard rushers this season, both coming in the same game. Tennessee’s Dontrell Hilliard (131 yards) and D’Onta Foreman (109) both eclipsed the century mark in their Week 12 matchup with the Patriots. But they only combined for one touchdown as New England rolled to a 36-13 win.

Patriots linebacker Dont’a Hightower said if they want to slow down Taylor, it will start up front against an Indianapolis offensive line that is adept at moving the pile and creating just enough room for Taylor.

The group should be even stronger with starting center Ryan Kelly being activated off the reserve/COVID-19 list after sitting out Indianapolis’ Week 13 win over Houston.

“Whenever you can give a guy like (Taylor) just space, a hole, a crease, a crack — he takes advantage of it. I don’t know how many 50- and 60-yard runs he’s got, but once he hits that first or second gear, once he sees that hole, he’s a hard guy not only to bring down but to catch.”

NOTES: Rookie quarterback Mac Jones was a late addition to the injury report Tuesday. He was listed with a left thumb injury on his non-throwing hand, but was a full participant in practice. He has started all 13 of the Patriots games this season. ... Rookie safety Joshuah Bledsoe was activated to the 53-man roster. A sixth-round pick, he has been on the reserve/non-football injury list since Aug. 30. ... Patriots owner Robert Kraft presented fullback Jakob Johnson with a football Tuesday, commemorating the German-born player participating in 1,000 career plays during his NFL career. Johnson joined the Patriots via the International Player Pathway Program in 2019, signing as an undrafted rookie. He signed a new one-year deal in March. Kraft used the occasion to hint at an announcement coming Wednesday on Johnson’s birthday. It could possibly be that the Patriots have been selected to play in an upcoming series of regular-season games in Germany, which the league is targeting to begin in either 2022 or 2023. “Since we’ve gone outside the U.S. we’re 3-0 and I want to keep that happening,” Kraft said.