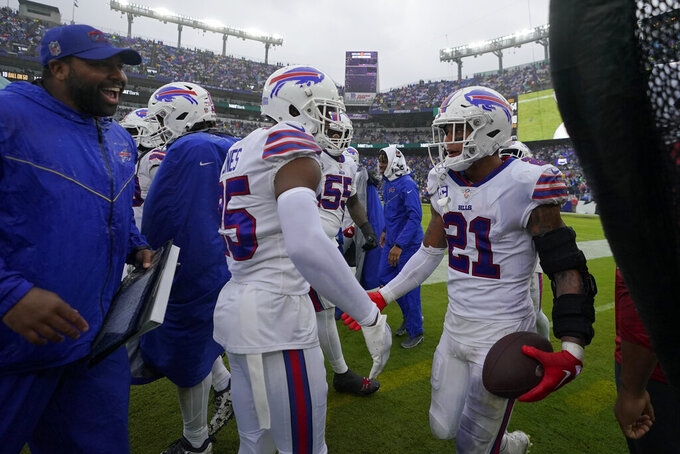 ORCHARD PARK, N.Y. (AP) — With multiple injuries to their secondary, the Buffalo Bills have relied on safety Jordan Poyer more than ever.

In the three games that Poyer has played for Buffalo this season, the Bills have not allowed a single point in the second half.

“That’s a great stat,” Poyer said with a smile.

Poyer and great statistics go hand in hand these days.

The 10-year veteran is off to one of the best starts of his career, leading the league in interceptions with four through the season’s first month.

And the timing couldn’t be better, after Poyer expressed his desire for a contract extension earlier this year.

“I enjoy playing this game,” Poyer said. “This is my sixth year in the system. I enjoy the guys that I’m playing with, I enjoy the coaches that are coaching me and I really feel like every time I step out on the field I’m able to play free. I’m able to just be myself and it’s allowed me to have this success so far. I just want to keep helping this team win football games.”

Poyer had a standout performance with two interceptions in Buffalo’s 23-20 win over the Baltimore Ravens on Sunday.

Poyer had one of the biggest plays of the game, intercepting Lamar Jackson in the end zone on fourth down with just over four minutes remaining. The play not only took away a potential go-ahead score, but it gave the Bills offense improved field position to stage a late comeback — which was successful when Josh Allen led the Bills down the field for a game-winning field goal.

Poyer had another interception earlier in the fourth quarter on a tipped pass. It was his first career multi-interception game. He was selected as the AFC defensive player of the week.

Poyer became the first Bills player to have an interception in each of his first three games played to open a season since Henry Jones in 1992.

“I mean, that’s why we love him,” Allen said. “He’s gonna put his body on the line. That interception at the end there was huge, it took three points away from them and it gave us better field position. Instead of being backed up, we get the ball at the 20-yard line now. But just the way he plays, man, the intensity, the love that he plays with for those guys on the field and on the sideline, you can’t replicate.”

Poyer missed Buffalo’s Week 3 loss to Miami with a foot injury. The Bills are without cornerbacks Tre’Davious White and Christian Benford, and fellow safety Micah Hyde — who has played with Poyer since the two arrived in Buffalo together in 2017 — is out for the remainder of the season with a neck injury.

“The fact that we’re missing Micah now has kind of raised his value from a leadership standpoint as well as a playmaking standpoint for us as a defense,” defensive coordinator Leslie Frazier said.

“We’re happy to get him back after missing the Miami game and hopefully he can stay healthy and be on the field the rest of this season. But he’s extremely valuable to our success as a defense. His leadership, his playmaking ability ... just the things that rub off on the young players.”

As for the contract situation, Poyer expects that everything will take care of itself as long as he continues playing at a high level. Poyer switched agents in April, hiring Drew Rosenhaus, and the two sides were able to come to a short-term agreement just before the start of the season that added up to $2 million in potential bonuses to Poyer’s current deal. Poyer is in the final year of a two-year contract extension that he signed in 2020.

“I’m just trying to take one game at a time,” Poyer said. “Everything else is going to work itself out. I understand if I go out there each week and just take one play at a time and continue to do the things that I’m doing and continue to try to help this team win football games, the rest will take care of itself. I can’t really worry about that.”