Prescott knows it's defense 1st for Cowboys despite return 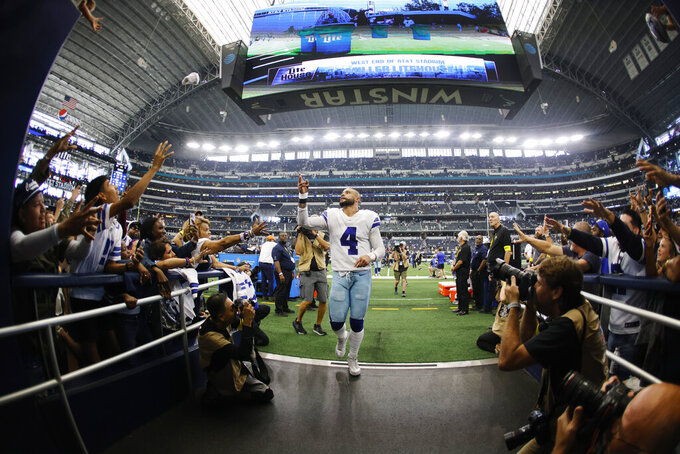 Dallas Cowboys quarterback Dak Prescott exits the field after the second half of an NFL football game against the Detroit Lions, Sunday, Oct. 23, 2022, in Arlington, Texas. (AP Photo/Ron Jenkins)

FRISCO, Texas (AP) — Dallas quarterback Dak Prescott's surgically repaired right thumb felt good enough in his return to the field to make some dangerous throws he knows he should have avoided.

As his comfort grows with each week removed from a five-game absence due to the fractured thumb, Prescott will be challenged to remember what kept the Cowboys in contention while he was out: defense.

“The last thing I’m trying to do is put this team in a bad position because I’m overconfident,” Prescott said after another defense-driven win, 24-6 over Detroit.

“When you have a defense like this, you have to continue to go through the reads and take a check down here or there, and it will pay off.”

Prescott, who was fortunate not to get intercepted at least twice, benefitted from the running game and some short fields to turn a 6-3 halftime deficit into a comfortable victory. Dallas forced five turnovers.

Even without takeaways, the formula will probably remain the same Sunday for the Cowboys (5-2) in another home game against a sub.-500 NFC North team, Chicago.

The Bears (3-4) will be on the road again on a short week, but looking to build on the momentum of a 33-14 victory at New England.

“I feel like we’re playing with a lot of confidence and poise,” Dallas cornerback Trevon Diggs said after recording his third interception this season, and 17th through 35 games in his career.

“We know how to keep teams out of the end zone. Just keep that mindset, and the game: Keep it close and our offense is eventually going to start clicking and get it working like they did.”

The Cowboys went 4-1 with Prescott sidelined and Cooper Rush under center. That certainly wasn't because of offensive dominance — Dallas remains among the worst teams in total yards, passing yards and third-down conversions.

The struggles are uncharacteristic for an offensive-minded franchise, but do give players and coaches hope for bigger things if Prescott can get the offense moving again.

“We are not going to put any limitations on what we can do,” Prescott said. “As I said, it’s important to grow each and every day. That’s what I told the team today. This was a great win, celebrate it and enjoy it but tomorrow we have to come in and get better.”

The Cowboys dropped Jared Goff five times when Detroit came in tied for the fewest sacks allowed with seven. Dallas has 29 sacks, tied for the fourth-most in club history through seven games.

Dallas is the only team with two of the NFL's top 10 in sacks.

Micah Parsons is tied with San Francisco's Joey Bosa for the league lead after getting his seventh against the Lions. Dorance Armstrong already has his career high with six, tied for fourth in the NFL.

While No. 1 receiver CeeDee Lamb's production has been solid, the group behind him is struggling to make an impact.

Noah Brown had five catches for 50 yards, but fumbled when he was somersaulted on a hit by safety DeShon Elliott inside the Detroit 10.

Michael Gallup caught a touchdown in his return from a torn ACL three weeks ago, but was shut out against the Lions after just two catches for 18 yards against the Eagles.

Kick returner KaVontae Turpin keeps taking advantage of the few opportunities he gets. The latest was a 52-yard punt return that Dallas couldn't turn into points when Prescott was sacked to get knocked out of field goal range. Turpin is second in the NFL at 16 yards per punt return.

The Dallas offense is 29th in third-down conversion rate, and it's not just a problem of third-down distance. The team's second possession against the Lions ended when Elliott lost 2 yards on third-and-1.

The Cowboys had to settle for a field goal when Tony Pollard was dropped for no gain on third-and-2. Another third-and-2 resulted in a sack of Prescott.

CB Jourdan Lewis is out for the season with a foot injury sustained after his interception against the Lions. Lewis got up after the catch, and was tackled awkwardly. Officials ruled him down by contact on review, rendering the attempt at a return pointless. ... TE Dalton Schultz had another scare with the right knee that has bothered him most of the season. He left the game after landing awkwardly on a tackle, but returned and drew a pass interference penalty in the end zone to set up one of Ezekiel Elliott's two 1-yard touchdown runs. ... Elliott took a hard hit on his right knee at the end of a 14-yard run and could be dealing with issues the same way he was a year ago.

20.41 — Parsons' mph when he chased down Detroit TE Brock Wright and tackled him at the 1-yard line near the pylon on a 17-yard catch. Jamaal Williams fumbled on the next play, and Anthony Barr recovered to protect Dallas' 10-6 lead in the fourth quarter.

The Cowboys won't be home again until Thanksgiving after playing the Bears. The open week is followed by trips to Green Bay and Minnesota as the Cowboys finish a four-game NFC North run.