Raiders coming off shutout, Jags coming out of 0-for-October 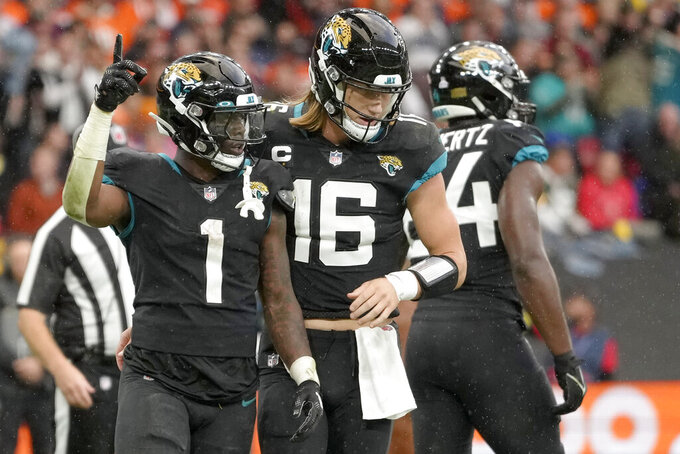 TURNOVER DIFFERENTIAL: Raiders minus-2; Jaguars minus-2.

RAIDERS PLAYER TO WATCH: QB Derek Carr is coming off one of the worst games in his career. He threw for 101 yards and didn’t lead the Raiders past midfield in seven drives. For the season, Carr has an 86.8 rating, is averaging 6.8 yards per attempt and is throwing TDs on 3.8% of his passes. Those are all his worst marks through seven games since his rookie season in 2014.

JAGUARS PLAYER TO WATCH: Travis Etienne had a career-high 156 yards rushing last Sunday in London and scored for the second consecutive week. He’s flourishing in a starting role, totaling 389 yards from scrimmage in his past three games.

KEY MATCHUP: Raiders WR Davante Adams vs Jaguars CB Tyson Campbell. Adams, a five-time Pro Bowler, had just one catch for 3 yards last week at New Orleans. Campbell had 30 tackles, an interception and a forced fumble in Jacksonville’s winless October. With fellow starter Shaquill Griffin (back) on injured reserve, the Jaguars are considering using Campbell as a trail defender on Adams.

SERIES NOTES: The Raiders have won three of the past four in the series, with the lone loss coming in their final game at the Oakland Coliseum in 2019. The Raiders officially moved to Las Vegas a few months later. An oddity in the first nine meetings: the winning team in Oakland averaged 19 points; the winning team in Jacksonville averaged 40 points.

STATS AND STUFF: The Raiders spent the week practicing in Florida after playing in New Orleans to avoid another long plane trip. ... The Raiders are coming off their first shutout loss in eight seasons. They failed to cross midfield for the first 58 minutes. ... Las Vegas’ six giveaways are tied for the second fewest in the NFL. ... Raiders K Daniel Carlson has made 39 straight FGs, five shy of Adam Vinatieri’s NFL record. ... Las Vegas DE Maxx Crosby is second in the NFL with 12 tackles for loss. ... Raiders LB Divine Deablo had 14 tackles last week and has reached double figures in three straight games. ... Las Vegas ranks last in the league defensively in takeaways per game (0.6) and sacks per game (1.29). ... The Raiders had no sacks or QB hits last week for the first time in a game since 2010. ... The Raiders averaged 1.19 yards per play on first down last week, their lowest mark in a game since 1998. ... The Jaguars are looking to end a five-game skid. They are 0-6 in one-score games. ... Jacksonville is playing the week after a London game for the second time in nine trips. The Jags lost the previous time they did the turnaround, in 2017. ... QB Trevor Lawrence has no INTs in four of his past five starts in Jacksonville. He’s the fourth QB in franchise history with 10 or more TD passes in each of his first two seasons. ... Travis Etienne is looking for his fifth consecutive game with at least 100 yards from scrimmage. He ranks fourth in the AFC with 571 yards rushing. ... Pass rusher Josh Allen has gone four consecutive games without a sack. He does have one QB hit in each of the past three.

FANTASY TIP: RB Josh Jacobs and Adams are must-starts for the Raiders. Jacksonville's Etienne has been one of the best backs in the league in recent weeks and could find holes against a defense that struggled to cover Alvin Kamara. Looking for a sleeper? TE Evan Engram scored his first TD with Jacksonville last week and is consistently one of Lawrence’s top targets.