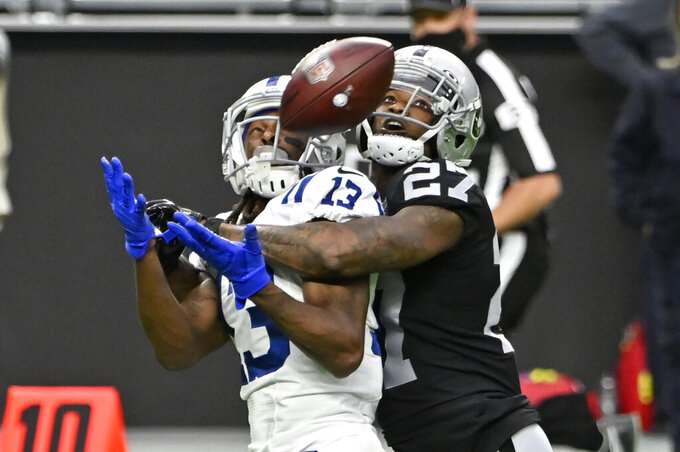 “He won’t catch him,” the Raiders' veteran play-by-play man said with audible frustration.

The Raiders never caught up to the Colts at all Sunday, with Indianapolis rolling to a 44-27 victory after another poor effort from a Las Vegas defense that continues to let down a team that was firmly in the playoff picture after a 6-3 start. Mired in its second 1-3 slide this season with defensive mistakes piling up, Las Vegas (7-6) is slowly erasing itself from that picture.

“To be a championship team and a playoff team, you have to be a good football team in all three phases,” Gruden said immediately after the game. “Defensively, we had no answer. You can’t give up that many yards rushing, and not get to the quarterback, and lose the turnover margin, and expect to win in this league.”

“Obviously, we didn’t do a good job of playing in our gaps, playing together as a unit,” defensive tackle Johnathan Hankins said. “We’ve got to take pride in stopping the run.”

The Raiders also struggled to pressure Philip Rivers, generating no sacks and one quarterback hit on the 39-year-old passer.

Guenther had been Gruden's defensive coordinator since they teamed up in Oakland in 2018. Marinelli is in his first season with the Raiders after a long NFL career as a head coach in Detroit and a coordinator in Chicago and Dallas.

Since a three-game winning streak in which the Raiders outscored the Browns, Chargers and Broncos by a combined 84-44 and limited them to an average of 325.3 yards per game, Las Vegas’ defense has once again flopped.

During the current 1-3 slide, the Raiders have been outscored 150-95 and allowed an average of 399 yards per contest. A defense that hadn't been great all season has been at its worst for the past month.

“I don’t want to make any excuses, (but) we miss a lot of players,” Gruden said. “We got stuck on some blocks, we misfit some runs, and we paid for it big time. We had no answer today. We better find some answers, and as soon as I’m done here, we’ll start searching.”

While COVID-19 absences and injuries have taken a toll, Guenther's schemes clearly aren't working, nor are the players who are supposed to run them. Gruden sees no excuse for the sloppy play and blown coverages that allowed several big plays by the Colts.

What's more, all six of the Raiders' penalties against Indianapolis were called against their defense.

Among the 19 catches the Colts hauled in, at least five went for 20 or more yards. Of the Colts' 31 rushing attempts, Taylor’s 62-yard dash was his longest, while Nyheim Hines added a 31-yard scamper.

Following the earlier 1-3 slide, Gruden vowed to make changes within the system, but supported Guenther despite his unit’s lack of consistency.

Now in a similar situation with only three games left and their playoff hopes slipping, Guenther isn't getting another chance to fix the defensive problems that have plagued the Raiders for much of the past decade.

Las Vegas lost by 17 or more points for the 14th time since Gruden returned to the sidelines in 2018.

And there’s no time to dwell on the loss or to make major changes with a game looming Thursday night against the Chargers, who lost to the Raiders last month when Las Vegas made a defensive stop in the end zone on the final snap of the game.

Both upcoming opponents will be eager to face a Raiders defense that went into Sunday allowing opposing offenses to end drives with a score 48.8% of the time - worst in the league. They’ll be at the bottom Monday after Indianapolis scored on seven of its nine drives (77.7%), the final one ending the game.

And if the Raiders can’t stop somebody soon on defense, their offense won't be able to save them.

“Whenever you’re in some shootout-type situations like we’ve been in this year, every possession matters,” quarterback Derek Carr said. “If you don’t hit on all of them, it usually doesn’t end well.”