Raiders look to get offense going after dud vs. Falcons 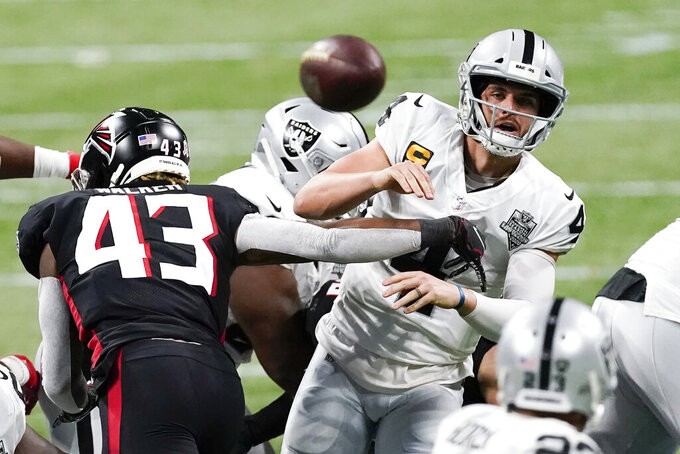 The run game was throttled, the protection was shoddy and Derek Carr gave the ball away with uncharacteristic frequency.

A Las Vegas offense that had been remarkably efficient for most of the season fell flat in a lopsided loss last week at Atlanta and must get back in rhythm quickly if the Raiders hope to make a late-season playoff push.

“We put it behind us,” Carr said Wednesday about the performance in a 43-6 loss to the Falcons. “It wasn’t good enough. We know that.”

The Raiders committed five turnovers, allowed five sacks, had 11 penalties and a season-low 40 yards rushing as almost nothing went right offensively in the team’s biggest blowout loss in six years. It was a far cry from the first 10 games when the Raiders ranked third in points per drive and had scored on the second-highest percentage of drives in the league.

The defeat dropped Las Vegas (6-5) out of playoff position in the AFC and leaves little margin of error for the final five games of the season. The stretch run begins with a visit to the winless New York Jets (0-11).

The Raiders’ playoff hopes last season were damaged by a 34-3 loss at the Jets in November and they can’t afford another slipup against an inferior opponent.

“My whole life, I feel like it’s a single elimination game,” coach Jon Gruden said. “We have a sense of urgency every day. We’ve got to get everybody together. We have a good mindset here. We didn’t lose last week because we were distracted. We realize what’s at stake. We got to just play better, a lot better than we did a week ago. If we do we’ll have a chance to survive.”

One thing that was a major problem in Atlanta has been a bit of a concern all season for the Raiders with Carr struggling to hold onto the ball when under pressure in the pocket. Carr lost three fumbles following strip sacks.

He lost one when he stepped in the pocket, sensed pressure to put a second hand on the ball but didn’t tuck it into his body and lost it. The second came when backup right tackle Brandon Parker was beaten right at the snap by Jacob Tuioti-Mariner and Carr was hit for a lost fumble. The last came when Carr’s arm bumped into teammate Kolton Miller as he was getting ready to throw, leading to another turnover.

“It’s something that we work on every day for all our skill players that touch the ball,” Gruden said. “A couple of them, when you get blindsided, there’s not much you can do. But just emphasizing two hands on the ball in traffic and sometimes giving up on a play. If the protection is breaking down, sometimes you just have to put the ball away, protect the ball, take the sack and move on to the next one. You are right. Those are turnovers that we have to address and we have to correct.”

Carr leads the league with eight lost fumbles this season and has a league-worst 31 since entering the league in 2014. Seven of those turnovers have come on the eight fumbles Carr has had on the 17 sacks he’s taken this season — a rate of fumbles on sacks about four times higher than the league average.

Carr said he made sure he did extra work on ball security at practice Wednesday to make sure the problem doesn’t linger.

“It’s not a stat I’m proud of,” he said. “It’s not something that I love. Honestly, there’s nothing that makes me more sick after a game then if I threw an interception or fumbled the football. No matter the reason. It makes me visibly upset, win or loss. So when something like that happens, I just try my best to look at the film and see what I could have done better on the play.”