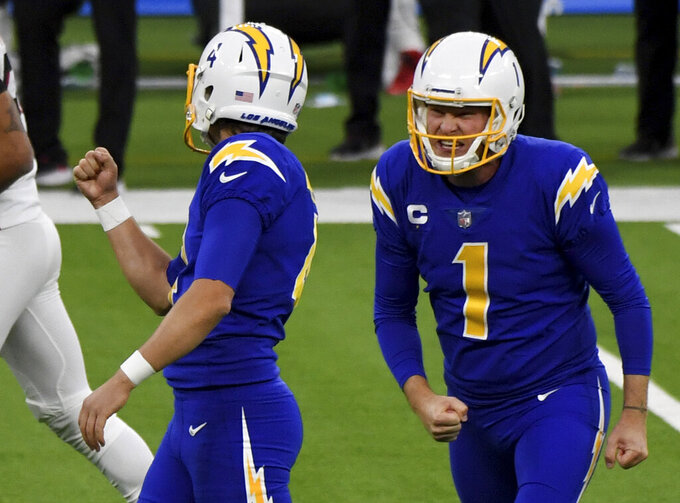 Little has gone right for the Las Vegas Raiders since they came within less than a minute of pulling off a season sweep against defending Super Bowl champion Kansas City.

That debilitating loss to Patrick Mahomes and the Chiefs has been followed by a lackluster three weeks that included lopsided losses to Atlanta and Indianapolis surrounding a lucky win over the winless New York Jets.

That led to the decision to fire defensive coordinator Paul Guenther in hopes that the Raiders (7-6) can rebound and maintain their playoff hopes starting with Thursday night’s home game against the Los Angeles Chargers.

“I think the main thing is the sense of urgency that our team has right now,” quarterback Derek Carr said. “We understand that we could have made it easier on ourselves in the last couple weeks going on this stretch run. The fact is that we still have a chance.

The Raiders will likely need to sweep the final three games and get some help if they want to make the playoffs for just the second time in the past 18 seasons.

The playoff hopes for the Chargers (4-9) ended a while ago, but they are just hoping to end the season on a positive note and build on last week’s win over Atlanta. Spoiling the Raiders' chances would be a nice bonus.

“It could give a little juice to guys I’m sure,” defensive end Joey Bosa said. “Especially being the Raiders and obviously the rivalry and all that. But to be able to get two wins in such a short period of time would be great, especially with how the season has gone."

Coach Jon Gruden talked about the need for a new voice when he replaced Guenther with defensive line coach Rod Marinelli on an interim basis. The Raiders had allowed more than 200 yards rushing in back-to-back games and had allowed the most points in the NFL during Guenther’s nearly three full seasons on the job.

Marinelli will have to make the changes with only one practice on a short week and missing several starters with defensive end Clelin Ferrell, linebacker Nicholas Morrow, cornerback Trayvon Mullen and safety Johnathan Abram all out with injuries.

The Chargers have struggled to generate takeaways since the start of last year, but they have five interceptions over the past four games with three coming in last Sunday’s win over Atlanta. Los Angeles has been outscored by 53 points after halftime, but last week marked the first time in 24 games that they had held an opponent scoreless in the third and fourth quarters thanks in part to second-half interceptions by Rayshawn Jenkins and Michael Davis.

“I know we’ve jockeyed a lot of guys around, put guys in different positions, but it feels like we’re improving,” defensive coordinator Gus Bradley said.

The Raiders were one of the best teams at protecting the ball over the first over the first 10 games. They had only nine turnovers on their first 100 drives this season before things started to change with a desperation late-game interception against the Chiefs. The Raiders have 11 turnovers in their past 36 possessions, including a league-worst 10 the past three weeks.

Carr has eight of the giveaways during this stretch, including his first four-game streak of interceptions since his rookie season in 2014.

“That’s something that Coach Gruden and I talk about all the time,” Carr said. “Sometimes I would feel like I always had to be so perfect. If I wasn’t perfect or I didn’t make the big pay or the perfect throw, then we weren’t going to win the game. That’s really a selfish mindset. That’s not right.”

After running it 37 times during his first nine starts, Chargers quarterback Justin Herbert has run it over four times in the past four games and none in the past two. He has also had to rely on shorter passes and checkdowns as teams are beginning to take away intermediate and deep routes. Herbert is only 5 of 17 for 105 yards with a touchdown and an interception on passes with 11 or more air yards.

“The plan has always been throw downfield and if that’s taken away, then you go down, you check back and whether that’s Austin (Ekeler) or one of the other running backs. You know, that’s just kind of our part of our offense,” Herbert said.

The Chargers have lost nine straight games against their AFC West counterparts, with all three this season coming down to the final play. Los Angeles lost to Kansas City in overtime on Harrison Butker’s 58-yard field goal, to Denver when Drew Lock threw a TD pass to K.J. Hamler and to Las Vegas when Herbert’s apparent TD pass to Donald Parham was overturned by replay. Of the Chargers' 20 losses over the past two seasons, 16 have been by eight points or fewer.