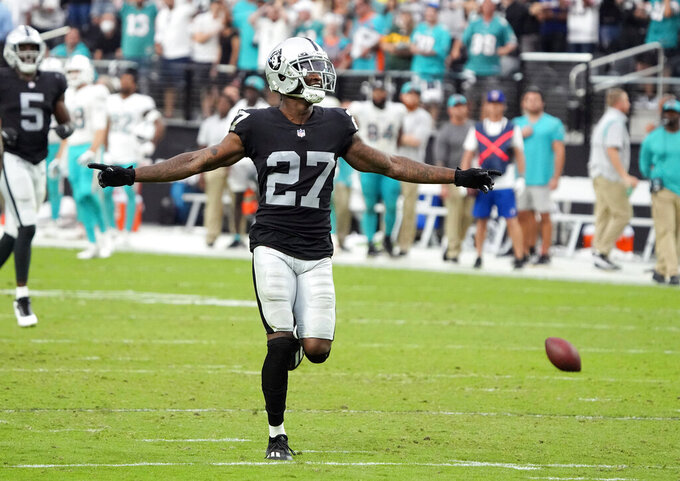 The trade gives Mullen a fresh start after he fell behind other cornerbacks on the Las Vegas roster with a new regime in charge.

The Raiders will receive a 2023 seventh-round pick that could be upgraded to a sixth-rounder based on Mullen's playing time this season.

Las Vegas also cut ties with last year’s first-round pick, waiving Alex Leatherwood one year after drafting him 17th overall. It marked the first time the Raiders got rid of a first-round pick before his second season since 1988, when they traded 1987 first-round tackle John Clay to the Chargers for Jim Lachey.

Leatherwood struggled mightily at right tackle last season before moving inside to guard after four games. He fared only slightly better at that position and fell down the depth chart this summer before losing his spot on the team. The Raiders will carry an $11.8 million dead cap charge over the next two years on Leatherwood.

The Raiders drafted Mullen 40th overall in 2019 and he became a starter his rookie season. He started 31 games in three seasons with four interceptions and 28 passes defensed. He played only five games last year because of a foot injury that also forced him to miss the offseason program and the start of training camp.

Las Vegas had acquired Rock Ya-Sin this offseason as a starter and also has free agent Anthony Averett, 2020 fourth-round pick Amik Robertson and slot cornerback Nate Hobbs in the mix at that spot.

The Cardinals had a glaring need at cornerback behind starters Byron Murphy Jr. and Marco Wilson. Arizona had little depth, especially with Antonio Hamilton sidelined with an undisclosed injury.

Mullen was part of a heralded Raiders draft class in 2019 that featured three first-round picks. That haul that came following the trades of stars Khalil Mack and Amari Cooper was supposed to transform the team but the Raiders have gotten little production from the top of that class picked by former coach Jon Gruden and GM Mike Mayock.

The new leadership of coach Josh McDaniels and GM Dave Ziegler made the decision to decline the fifth-year options on first-rounders Clelin Ferrell, Josh Jacobs and Johnathan Abram.

The new regime did make a long-term commitment to a couple of gems found later in the draft, giving lucrative deals to fourth-round edge rusher Maxx Crosby and fifth-round slot receiver Hunter Renfrow.

The Raiders also whiffed on their two first-rounders from the 2020 draft, having released receiver Henry Ruggs III after he was charged with DUI felonies in a fatal crash and cornerback Damon Arnette after he made online threats.