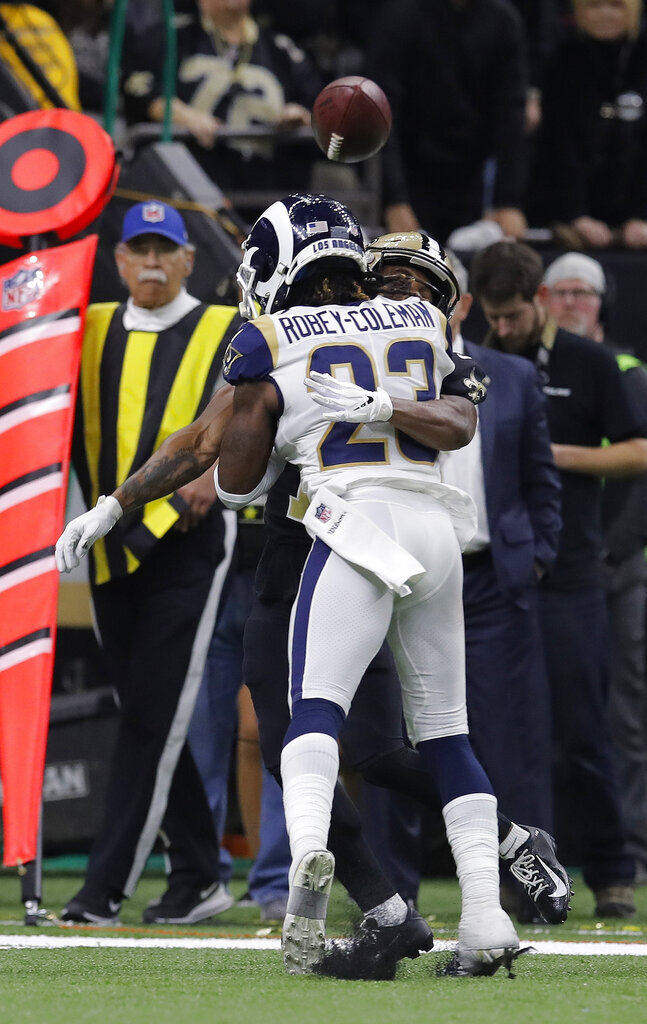 THOUSAND OAKS, Calif. (AP) — Los Angeles Rams defensive back Nickell Robey-Coleman will pay his fine from the NFL for a helmet-to-helmet hit on New Orleans receiver Tommylee Lewis in the NFC championship game.

The Rams' slot cornerback wants to move past the drama surrounding that now-infamous hit, which also appeared to happen well before Drew Brees' pass arrived in the fourth quarter last Sunday. No flag was thrown for pass interference or for the helmet-to-helmet nature of the hit, possibly altering the outcome of Los Angeles' 26-23 overtime victory at New Orleans.

"It's all good, and I'm moving on," Robey-Coleman said. "That's how the league feels. That's their call."

Robey-Coleman confirmed he received a fine from the NFL on Friday, essentially a tacit acknowledgement by the league that a penalty should have been called. The NFL Network reported he was fined $26,739.

Robey-Coleman wouldn't say whether he agreed with the league's decision to fine him for helmet-to-helmet contact, but the veteran defensive back acknowledged after the game that he could have easily been whistled for pass interference.

"It's the league's call, the ref's call," Robey-Coleman said. "I have nothing to do with that (decision). I made a football play. The ref made his call, and there's nothing else that I could do about it. That's their call, and that's something that you just have to live with as a football team, and we're going to the Super Bowl, so we just have to move on."

They're not done talking about it in New Orleans, however. The no-call has sparked outrage among the Saints and their fans, including calls for a Super Bowl boycott. Two lawsuits have been filed over the officiating, calling for everything from a replay of the game's final moments to full refunds for Superdome fans.

If Robey-Coleman had been flagged, the Saints would have been able to wind down the clock to the final seconds of regulation before kicking a short field goal, putting them in a commanding position to win. Instead, the Rams are going to their first Super Bowl in 17 years after they drove for a tying field goal and an overtime winner.

The Rams have been diplomatic about their fortunate break, acknowledging the sketchy nature of Robey-Coleman's hit while also gently pointing out that one play doesn't decide any game.

"All we do as coaches, if a (penalty) is called, we usually get mad if it's against us," Los Angeles defensive coordinator Wade Phillips said. "If a (penalty) is not called, we thought they were holding Aaron Donald or something. But if they don't call it, you go to the next play. That's the way the game has been played for a long time."

By paying the fine instead of appealing it, Robey-Coleman hopes to turn his focus to facing Tom Brady and the New England Patriots in the Super Bowl in Atlanta next weekend. Robey-Coleman is likely to line up extensively against Julian Edelman, the Patriots' vaunted slot receiver.

"Him and Tom (Brady) work great together," said Robey-Coleman, who faced the Patriots repeatedly during his time in the AFC East with the Buffalo Bills. "Can't wait to get on the field and play against those guys."